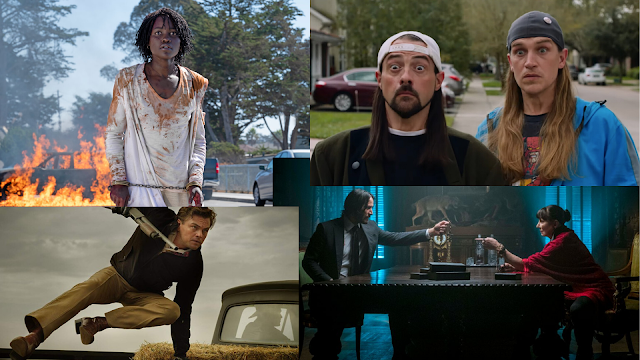 We promise that this is the last list like this until next year, but we couldn't let 2019 fade away without mentioning our favorite scenes from 2019.

While all of the action scenes in this third installment of the ever-growing series, it is the action scene that features two dogs that really wowed me. I have never really seen dogs incorporated into an action scene like they are here. The dogs are an integral part of the scene and elevate the scene from a good action scene to a great one. The fact that the dogs are real too makes a big difference.

SHARON TATE WATCHES HERSELF ONSCREEN (ONCE UPON A TIME...IN HOLLYWOOD)

Sometimes the best scenes in film are the ones where little to no dialogue is said. Take for example the scene where Sharon Tate watches herself in Once Upon a Time...in Hollywood. Tate is running some errands and she sees that a theater in town is paying her latest film. She gets into the theater because she is one of the stars of the film. We watch her dance to her seat to the music from the trailer to C.C. & Company. Soon enough she is watching the film proper and as soon as the laughs come in, she is in heaven. She even has memories of training with Bruce Lee for her fight scene in the film; Tate sits forward in her seat as the fight commences and is overjoyed when the audience cheers for her after she defeats her enemy. Margot Robbie is a joy to watch in the film and seeing her watching Tate’s film as Tate is a real pleasure of the film. Sure, she doesn’t have much dialogue but she doesn’t need it. She conveys everything we need to know with her body language and facial expressions.

THE GLASS MAZE (IT CHAPTER TWO)

Many people were disappointed with the follow up to the massive hit It, but there is no denying that there are scenes that work even if you think that the film isn’t as good as the first film. The scene I am talking about is a scene where the James McAvoy character follows a kid, who he knows is going to be a victim of good old Pennywise. The scene is scary because Pennywise is at his most demonic. McAvoy can not get to the kid because he is blocked by a glass wall Pennywise sees this opportunity and starts banging his head against the glass until it shatters. He eats the kid in front of McAvoy. The scene works because there is very little CGI (which the film and works at getting us scared by the sheer terror that builds up in the scene.

Ophelia Plays “Fuck the Police” by NWA (Us)

Jordan Peele’s follow-up to his Oscar-winning Get Out (yes, it really did win an Oscar for Best Original Screenplay), Us had big shoes to fill. Thankfully, the film was another classic and contained one of my favorite scenes of the year. We already know that the main family in the film have doppelgangers, but it isn’t until we visit the other family in the film (friends of the main family) that we discover that there are more doppelgangers. The family is attacked by these doppelgangers and killed off one by one. At one point, the wife asks Ophelia to “call the police”. Ophelia answers back with “Playing ‘Fuck the Police by N.W.A. This leads to one of the biggest laughs in the film and helps solidify Peele as a force to be reckoned with in the horror genre as the scene is both funny and scary.

Kevin Smith hasn’t had the best 2010’s. His output has been mostly questionable with none of his films released during this time being all that great (I think Red State is ok while liking the scenes before the walrus shows up in Tusk). That is until Jay and Silent Bob Reboot came along. Jay and Silent Bob Reboot is a return to form for Smith, bringing his most beloved characters out of retirement for what may be their last run. Smith also brought back characters we haven’t seen in over a decade, including Loki (not the Marvel one), Boo Boo Kitty Fuck, and Holden McNeil, played by Ben Affleck. Affleck’s appearance in the film would have been a big surprise for fans had it not been ruined in the film’s advertising, but Affleck’s scene did hold a much bigger surprise: the return of Alyssa to the Viewaskewniverse. We have not seen Alyssa Jones since Jay and Silent Bob Strike Back and it was a genuine surprise for us fans. It also came as a surprise that Alyssa had a child with Holden being the surrogate. The scene holds the emotional core of the film and is one of the best scenes that Smith has ever written. We just hope that he keeps on this path for the time being as his best work is withing the Viewaskewniverse.

THE ENDING (READY OR NOT)


Ready or Not is what you would call a “sleeper hit” with it bringing in a pretty good box office total while being beloved by anyone who saw it. What viewers were not ready (or not) for was the surprise ending. The film is about a rich family who must play games with anyone entering the family in order to appease a demon. Now, no one really thought that the demon thing would play as heavily as it does in the film. This brings us to the ending which finds out surviving family members exploding into bloody bits because the appeasing of the demon was not achieved. This ending was a shock to anyone who saw the film and honestly is one of the best endings of the year.


Having never heard of Alita Battle Angel outside of James Cameron talking about it before the film was even filmed, I had no idea what I was getting myself into. What I found was a well made, overstuffed film that was long, but fun. It also contained a performance by Rose Salazar who made us believe in child-like wonderment again. Her Alita starts out not knowing anything about her past and has to discover things as if she had just been born. This leads her to being handed a piece of chocolate which she eats right away. The sheer joy on her face as she chews is wonderfully conveyed by Salazar and the CGI artists. Much like the joy that Margot Robbie gave to Sharon Tate in Once Upon a Time...in Hollywood, Rose Salazar gives us a character who just loves being alive. You don’t get too many characters like that anymore.
THE TRUCK ON THE LONELY ROAD (BRIGHTBURN)

Brightburn was a bit of a letdown. The film speeds through its setup so that it can get to horror aspects so fast that it is really hard to not notice. That being said, there are a few scenes that will stay in your memory for a long time. The scene that I am talking about takes place at about the mid point of the film when one of the evil boy’s family members realizes that the kid is all sorts of evil. The family member, an uncle, takes off into the darkness in his pickup truck. The boy catches up to the uncle, fucks with him for a bit, then picks up the truck by the back bumper. When he has lifted the truck so that it is perpendicular with the dark, lonely road the truck once sat on, he drops the truck. It smashes into the ground with the uncle’s mouth wrapping around the steering wheel as it crashes into the pavement. With the hazzard lights blinking as our only source of light, we see that the uncle’s jaw hangs on for dear life as the boy finishes him off. Seeing this in the theater, with the surround sound really working overtime, was a real treat for me, even if the film wasn’t.

GODZILLA AND KING GHIDORAH MEET FOR THE FIRST TIME...THIS TIME (GODZILLA: KING OF THE MONSTERS)


As a huge fan of Godzilla, I have always wanted to see some of Godzilla’s greatest foes and there is no bigger foe than King Ghidorah. When the studio announced that they were including King Ghidorah, Mothra, and Rodan I have to say that I was giddy as hell. I have never seen any of these characters on the big screen, so this was going to be a real treat for me and other Godzilla fans. So, when King Ghidorah finally breaks out of his icy grave and faces off against Godzilla, for the first of many times in the film, I almost cried. Seeing Godzilla face off against his great foe was such a beautiful sight.

SHOOTING "DOLEMITE" (DOLEMITE IS MY NAME)


A few years ago, after shuffling my feet when it came to actually sitting down and watching the first Dolemite film, I finally sat down and watched the film and I loved it. The film had become very famous due to the amount of times that the boom mike shows up. Who would have ever thought that there would be a Rudy Ray Moore biopic starring Eddie Murphy? Murphy brings so much life to the performance that you know that Murphy is back. The scene that solidifies this film’s greatness is the scene where Rudy Ray Moore and company, including a very funny Welsey Snipes, shoot the scene in front of Dolemite’s house where the police show up to arrest him on some trumped up charges. In what can be considered the slowest, clumsiest fight scene ensues where Dolemite defeats the police with some of the worst kung fu I have ever scene. As funny as the scene is, it is the Snipes character who sells just how bad this scene is while Moore thinks the scene is really good. Murphy put in an honest performance and this is the scene that really shows everything the film is trying to say.