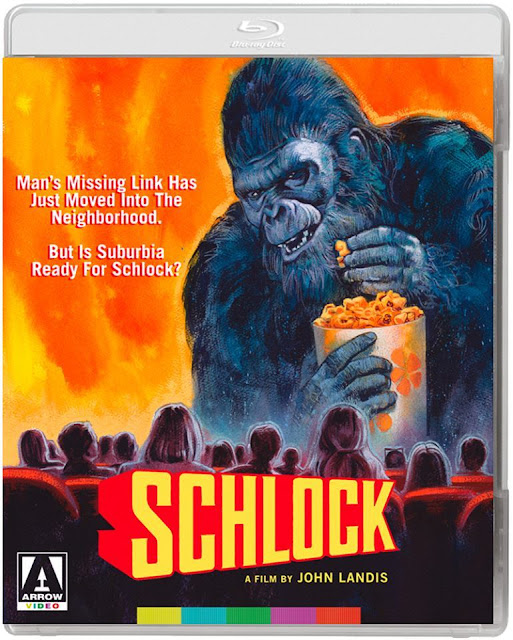 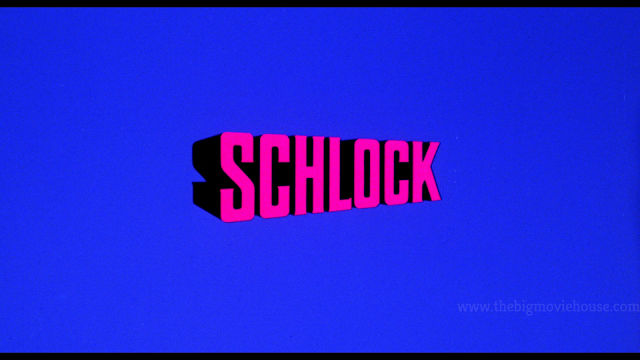 Carnage! Terror! Banana skins! The mighty prehistoric ape Schlocktropus has emerged from hiding to embark on a full-scale rampage across a quiet Southern California suburb. The police are baffled. The army is powerless. The body count is rising. But when Schlocktropus encounters a kindly blind woman (Eliza Garrett, National Lampoon’s Animal House) who sees beyond his grotesque visage, the homicidal simian is presented with a chance at redemption…


How many films do you know that are perfectly titled? There are, of course, the ones that are so generic that you could switch the titles around and no one would really notice. Think of Desperate Measures and Extreme Measures. Which one stars Michael Keaton as a serial killer and which one stars Hugh Grant as a doctor? It doesn’t matter because the titles don’t matter to the films.

Then there are the ones that got it so right that you really can’t think of another title for that particular film. Citizen Kane, Killer Klowns from Outer Space, and Night of the Living Dead are just a few films that have the perfect titles. Now you can add the 1973 John Landis directed Schlock to the list. Not only is it the name of the main character, but it perfectly describes the film as well. This is a film that bathes in schlock. In fact, if it could be the entire definition of the word schlock, it would be.

The film is nothing more than a bunch of skits surrounding the main character, an ape, or the missing link as the film calls it, as he goes around and does silly shit while other people try not to pay any attention to the shenanigans that are happening right in front of them. The film plays out like so: Schlock wanders into something he has never seen before. We then see what it is that he is seeing so we can recognize it, and then Schlock reacts to it by destroying it or the idea of it.

That’s it. Ok, there is the thinnest of “plots” revolving around a blind girl who thinks that Schlock is a dog and accepts him. When he decides that he needs to recreate the ending to King Kong, Schlock kidnaps here, she can see now and wants to have nothing to do with him, who she does not recognize, and climbs the tallest building in town, which is only a few stories high. Outside of that, there is nothing to this film, but the skits.

I will admit that I laughed quite a few times during the film’s short run time. I definitely found the film amusing, but it never went past being just that: amusing. This is the type of film that you and your friends come up with when you guys are high off of your asses. Being that the film was shot and released in the early 70’s, I can see that. But a film shouldn’t have to be funny when your state of mind is altered. It should be funny at any time. There are plenty of people out there that think that Cheech and Chong are the worst, but talk to some who knows a thing or two about weed and they will tell you that Cheech and Chong are gods.

Schlock is a decent film that never rises above a few laughs and a lot of giggles. I really wanted to like the film more than I did, but it just didn’t happen. Maybe one day I will smoke some of the world’s finest green and discover that Schlock is the greatest film ever made. It could happen. 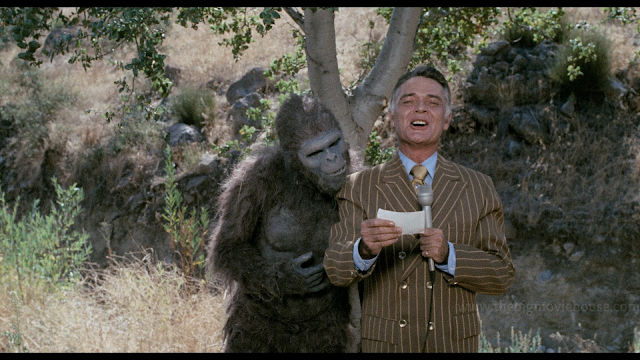 Schlock was shot on 35mm film, something that not a lot of films with as smaller budgeted films like Schlock could afford, and is presented in the film’s original aspect ratio of 1.85:1. Schlock looks great. The film is owned by John Landis, so this is coming from his own personal print which also happens to be the film’s original camera negative. This 4K remaster makes the film feel like it is being shown for the first time ever and I doubt that Schlock looked this good when it opened in theaters. There is a nice fine film grain that grows stronger depending on the scene. This grain gives the film a very film-like feel and that it something that fans of the film and film, in general, will adore. Colors look great and blacks are very dark. As with most Arrow titles, there is no tinkering with the image like so many of the bigger companies like to do. This is a straight transfer and it gets The Big Movie House seal of approval. 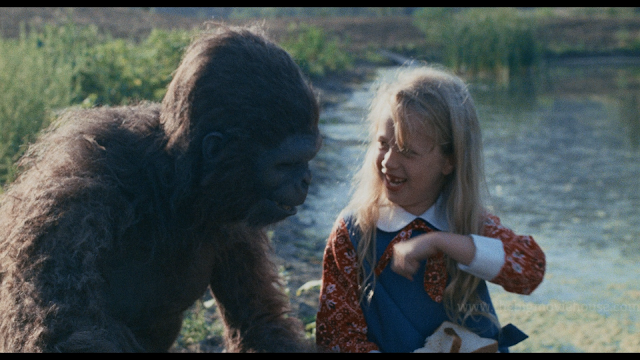 Presented in an LPCM Mono format, the sound here is great as well. This being a mono track, there is nothing in the surrounds, but the film wouldn’t have needed it even if it was available back then. This is a comedy that relies mostly on sound effects and music and both are reproduced splendidly. Dialogue is crisp and clear as well. 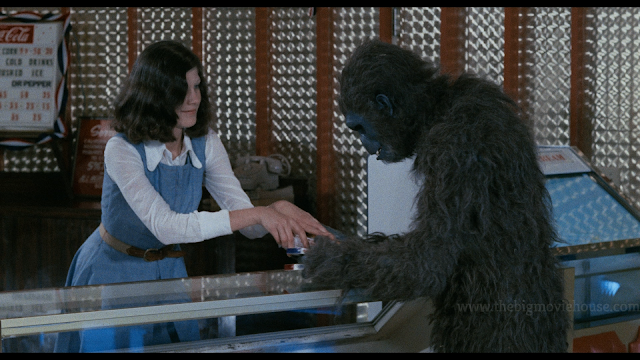 As this is a review copy of the film, I can comment on the packaging, but we should know what we are getting by now with Arrow. Reversible cover art, booklet with writings about the film, maybe a slipcover. We do know that whatever the packaging is, we will love it. 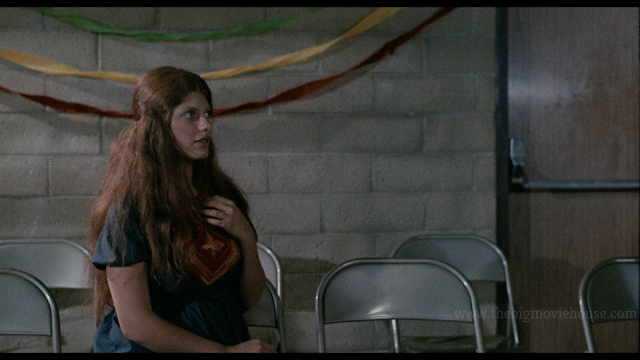 Audio Commentary with John Landis and Rick Baker. This is a nice track with lots of stories about the making of Schlock and general silliness.

Schlock Defrosted (17m 51s, HD) This is a brand new interview, recorded exclusively for this release, with critic and author Kim Newman. Newman starts things off by talking about how Schlock wasn’t the first horror film made by horror fans who grew up on Famous Monsters of Filmland magazine. The first film was Equinox, a film that I have reviewed in the past and love unconditionally. He then goes on to talk about Famous Monsters and its founder, Forrest J. Ackerman, who appeared in every film that was made by someone who grew up on his magazine. Newman finishes the interview by breaking down Schlock and what makes it work. This is a great interview with Newman, who I am becoming a fan of thanks to companies like Arrow.

Birth of a Schlock (41m 27s, HD) This interview, conducted by Turbine Media, with John Landis, was originally seen on the German blu-ray of Schlock earlier this year. This is one of those interviews where the person conducting the interview asks the questions with onscreen text. I hate when companies do this. Why can’t they just edit the interview like every other company? Granted, we only see these types of interviews done lesser and lesser times, but it just is annoying and ruins the flow of the interview. Just ask the questions or edit the interview to just flow like the interviewee is coming up with the whole story on their own.

That said, Landis barely talks about Schlock. He talks about his beginnings in film and what drove him to make his own independent film rather than going through the studio system. When he does get to Schlock, he talks about the film for a few minutes and then starts talking about the film he made after that, Kentucky Fried Movie. It is a good interview only because Landis tells great stories.

I Shot Schlock! (7m 34s, SD, 1.33:1) This is an archival interview with Schlock’s cinematographer Bob Collins. He has some good stories to tell about shooting the film and working with Landis and the rest of the cast and crew. 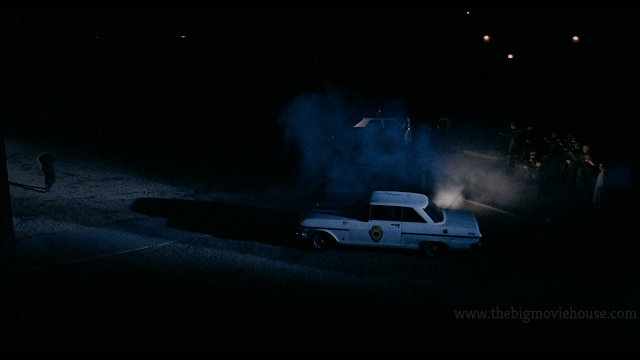 Schlock is a goofy film that might have played better if I were high or a child when I first saw it. The film is still funny, but only up to a point after which it grows kind of tiring. I would still recommend the film to Landis fans as well as those who like goofy things.

The blu-ray, from Arrow Video, is really good. The picture and sound quality are outstanding and the special features are worth the watch. This is the perfect blu-ray to give as a Christmas gift to that special someone who loves watching silly things happening on screen for extended periods of time. 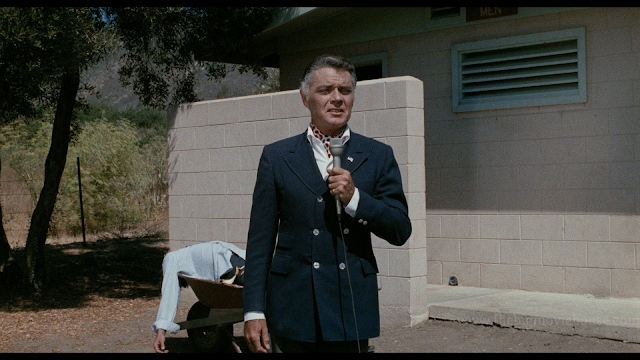 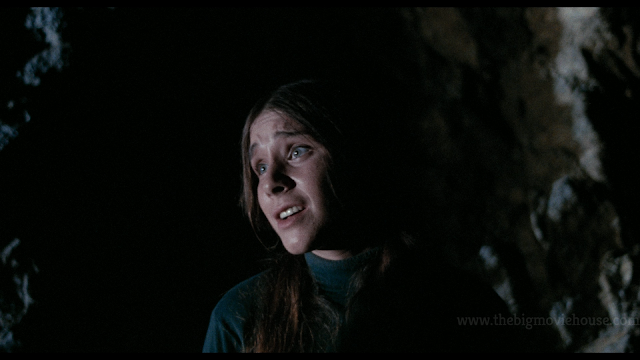 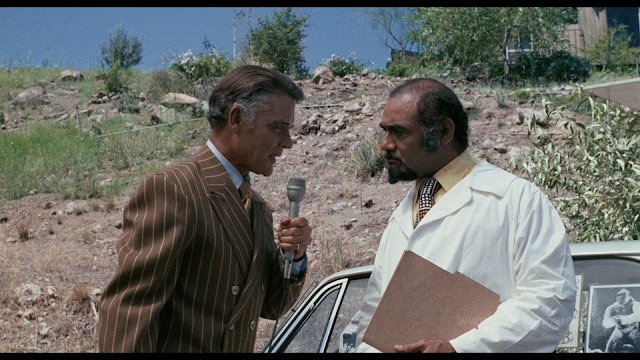 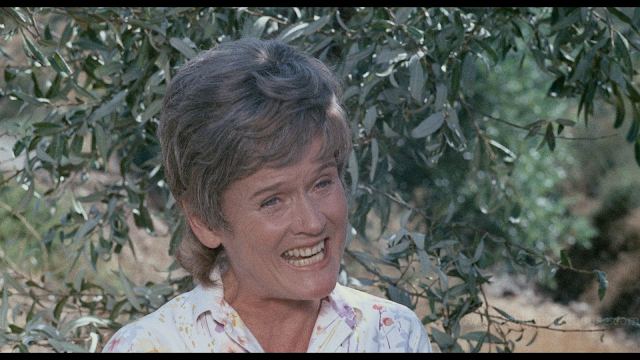 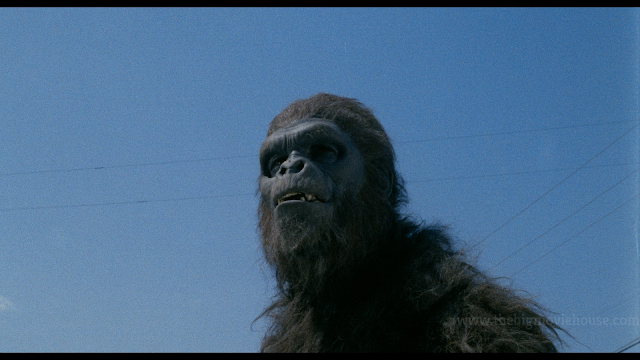 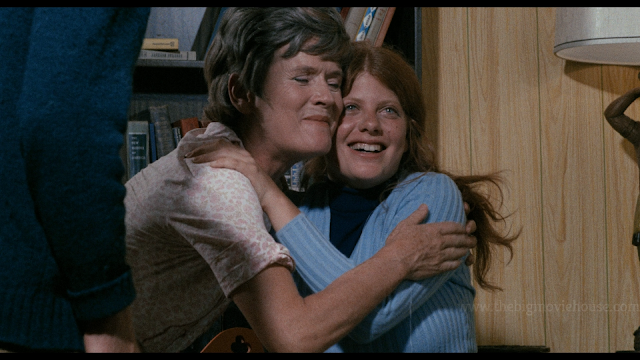 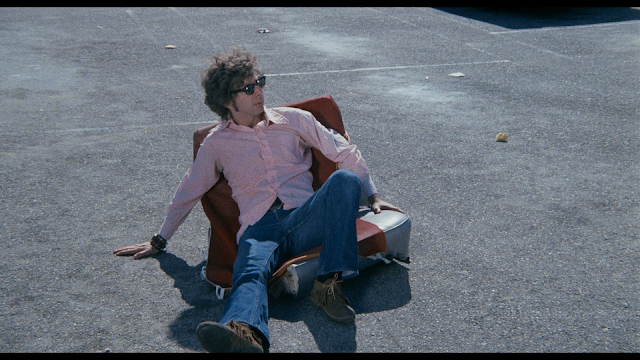 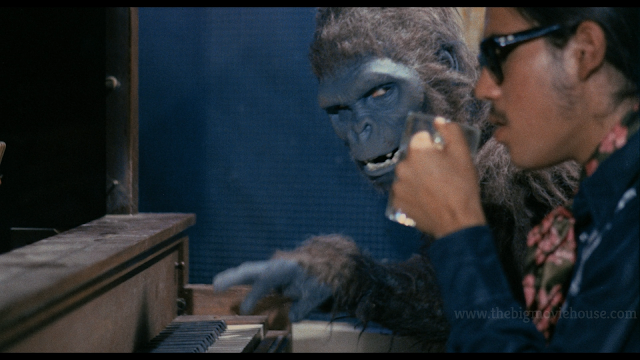 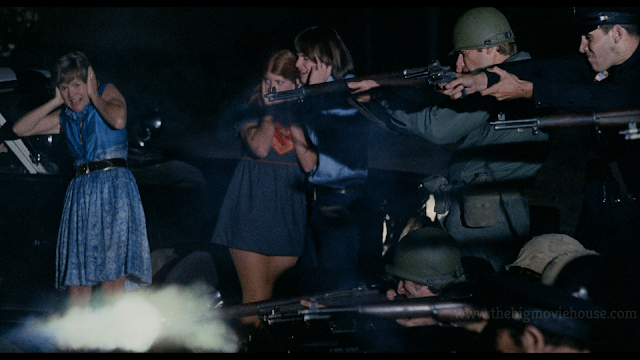