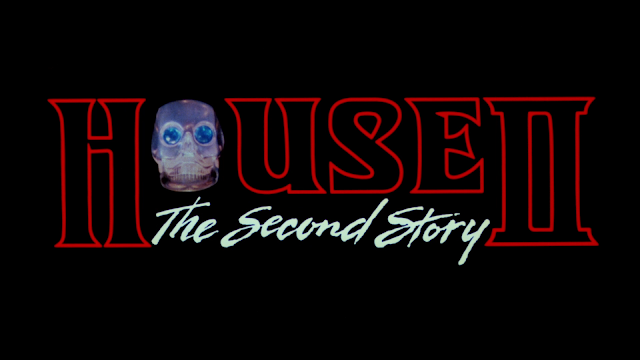 Ethan Wiley, Sean S. Cunningham, Harry Manfredini, and Kane Hodder return for this making-of and are joined by actors Arye Gross, Jonathan Stark, Lar Park Lincoln and special effects master Chris Walas. The focus on this making of are the effects as those are what the film is really about.
Talk about how the different effects were achieved as well as the inspiration for the world and creatures goes on for a long time, with the acting and everything else taking a backseat. I have no problem with this as the effects are that good. Fans of the film will want to check this making-of out.

Here we get a making of that was made during the filming of House II. We get a lot of behind the
scenes footage as well as interviews with Royal Dano and John Ratzenberger.

Again, we get a series of stills from the film, behind the scene photos, and different posters used for the film, all while the score from the film plays.

Recorded for the 2000 Anchor Bay release, this commentary is not as fun as the one found on the first film. None of the actors join the track, so talk is pretty dry. There is a lot of good info here, but the track just isn’t as good as the first film’s track.

Like the rest of the film’s found in this box set, House II comes encased inside of a blue blu-ray case, unlike Arrow’s other releases that come inside of clear blu-ray cases.

The front cover is reversible with the original theatrical poster on one side and newly commissioned artwork from Justin Osbourn on the other side. Like House, the artwork here is very nice, displaying the main characters nice throughout the work.

The back cover gives us a synopsis of the film as well as the special features that are on the discs.

As for the discs themselves, there are two: a blu-ray and a DVD. Both discs feature some of the newly commissioned artwork with the villain, Slim, taking the blu-ray and our heroes taking the
DVD.

The blu-ray is REGION FREE and the DVD is REGION 1 and 2. 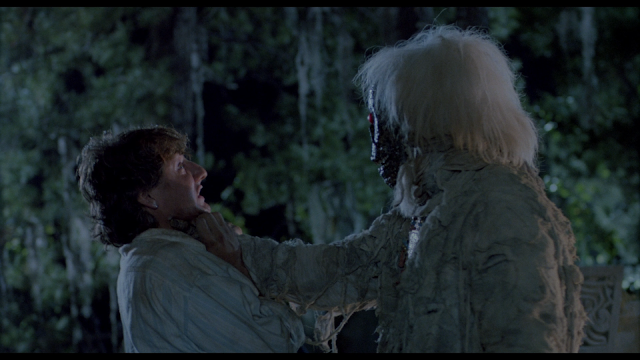 House II was not given the royal treatment bestowed upon the first House, but the picture quality here is definitely a step up from the dvd. There are no framing issues like the ones found on the first film’s blu-ray, but the picture could have looked better. There is a nice layer of grain found here and the detail is nice. Gone is the blueish tint of the Anchor Bay dvd in favor of a more neutral tone. There are some colors that pop, but the film is mostly shot in muted colors. The picture does seemed zoomed out when compared to the Anchor Bay release, but that is because the Arrow release is closer to the film’s original aspect ratio of 1.85:1 than the Anchor Bay release was. Overall this is a nice looking picture that could have been better. 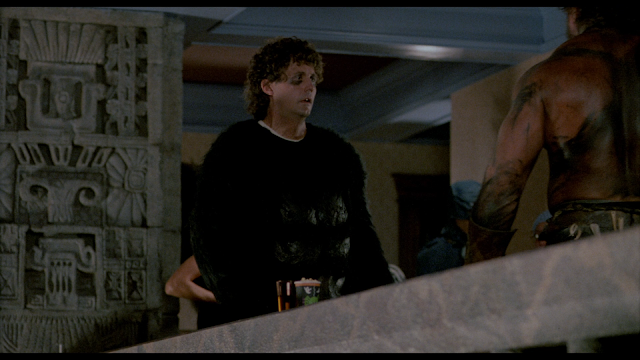 Arrow has given us the same two choices as they did on the first film. The default track is a 2.0 LPCM track that does a good job of recreating the mono track the film was recorded in. The dialogue is clean and clear and there are no distortions found either. There is also a 5.1 DTS-MA track is good, but I favor the original track any day of the week. 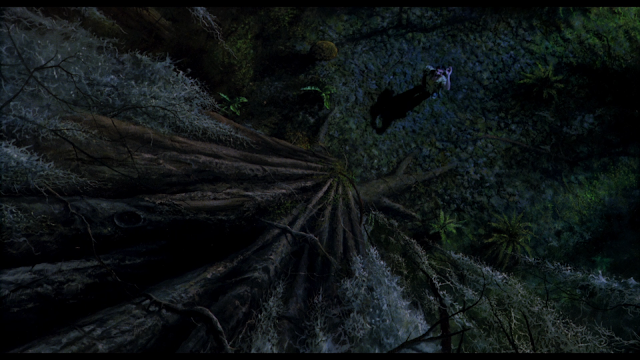 I do not have a history with House II as I do with the original film. I have only seen this film once before and that was about 13 years after it was first released. I don’t really remember much from the film, but I do remember not liking it very much. That, however, made the film more enticing to me. Was it going to be that sequel that was better than the original or was it going to be the sequel that killed a franchise?

The answer lies somewhere in between. Unlike the first film, House II is a comedy with horror elements, and even those elements are questionable. Gone is the gore of the first film, even though the film wasn’t all that gory to begin with. Also gone are the ugly monsters and things that go bump in the night.

Instead House II goes for a more fantasy element. Sure, there are ghosts and zombie horses, but this film also has a caterpuppy (a mixture between a puppy and a caterpillar) so the film can’t really say that it has that much to do with horror. We also get Aztecs, giant birds, cowboys, a crystal skull (so George Lucas stole the idea from this film? Interesting.), and an electrician who is also an “adventurer”.

Young urban professionals Jesse (Arye Gross) and his girlfriend Kate (Lar Park Lincoln) move into an old mansion that has been in Jesse's family for generations. They are soon joined by Jesse's goofy friend Charlie (Jonathan Stark), who brought along his diva girlfriend Lana (Amy Yasbeck), in the hopes of being discovered by Kate, who works for a record company.

Jesse has returned to the old family mansion after his parents were murdered when he was a baby. While going through old things in the basement, Jesse finds a picture of his great-great grandfather (and namesake) in front of a Mayan temple holding a crystal skull with jewels in the eyes. In the background is a man Jesse learns is Slim Reeser, a former partner of his great-great grandfather turned bitter enemy after a disagreement over who would get to keep the skull.

Reasoning that the skull must be buried with him, Jesse and Charlie decide to dig up Jesse's great-great-grandfather in the hopes of procuring the skull. They unearth the casket only to be attacked by the corpse (Royal Dano), who then shows himself to be friendly when Jesse reveals his identity as the senior Jesse's great-great grandson. Jesse and Charlie take the cowboy zombie, nicknamed "Gramps", back to the house, where he is horrified to learn that the skull has not rejuvenated his body as he had hoped.

Gramps and Charlie go out drinking and driving, and later the boys listen for hours to Gramps' stories of the old west and his outlaw life. Gramps explains that the house is actually a Mayan temple, and that each of its rooms act as a hidden doorway across space and time. He charges Charlie and Jesse with defending the skull against the forces of evil.

During an impromptu Halloween party thrown by Charlie, Gramps makes an appearance (though he is overlooked as it is a costume party), Kate leaves Jesse (taking Lana with her) after he is seen with an old girlfriend by her smarmy boss (Bill Maher), and Jesse and Charlie pick up two new pets in the Jurassic era, a baby pterodactyl and a caterpillar-dog.

Bill (John Ratzenberger), an electrician and "part-time adventurer", arrives to inspect the house's old wiring. While seemingly a buffoon, he pulls a short-sword from his tool case and leads the boys through "one of those time-portal things...you see these all the time in these old houses." In the mystic past, the three rescue a Mexican virgin who was about to be sacrificed, who seems to like Jesse but throws things at Charlie.

As you can tell, this is not a film that is too be taken too seriously. The film obviously wants to be more of a wacky comedy than a horror film and I have to commend them on trying. While the film doesn’t succeed at being all that entertaining, the film’s tone doesn’t waver like the first film’s did. The tone is consistent from start to finish and you can tell that the filmmakers were making the film that they wanted to.

While the film isn’t all that good, I did find myself getting wrapped up in the adventure from time to time. The scene where Jesse and Charlie go into the otherworld to get back the skull for the hundredth time (that is really all this film is: get the skull, lose the skull, go on wacky adventure to get skull back, repeat.) and find that a giant bird has taken it is a real crowd pleaser.

The effects here are really, really outstanding. There is so much going on with matte paintings, animatronics, stop-motion animation, and good old make-up that it is easy to miss something the first time watching the film. I only saw things I missed because I was listening to the commentary track and noticed something I missed earlier.

While some of the set pieces are well executed, there are plenty of scenes that don’t work. The party where a Conan looking bad guy enters the house and steals the skull is funny in theory, but when the great-great-grandfather tells Jesse that the Conan guy is “a pushover” I was expecting just that, but the film follows the tried and true by not trying hard enough with the comedy.

I have to give credit to House II for trying something instead of rehashing the same things from the first film. The fact that you don’t have to see the first film in order to enjoy or understand this film is a testament to how creative the filmmakers were trying to be. They succeed in building a fantasy world, but fail in the comedy department. There are some funny one-liners, but the film doesn’t really go beyond that. 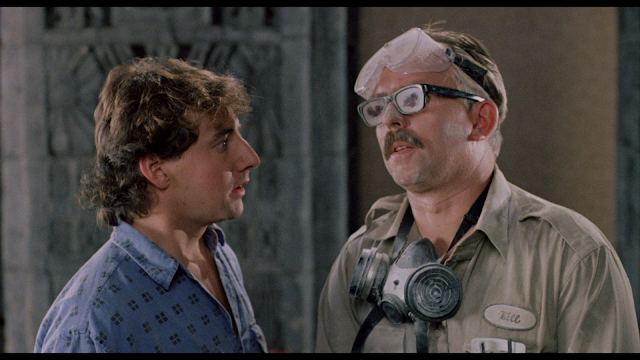 House II: The Second Story is a well made film that sticks to its guns, but doesn't completely ride off into the sunset. The comedy doesn't work most of the time and that is what takes up the non-fantasy parts of the film. The audio/video quality is good, but not great and the special features do the job, but the commentary is way too dry for my taste. This disc is for die-hard fans of the film. 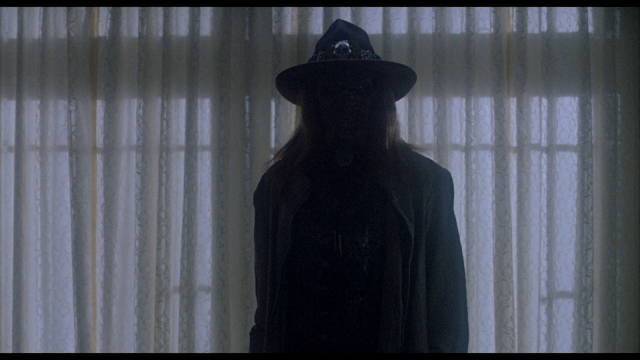 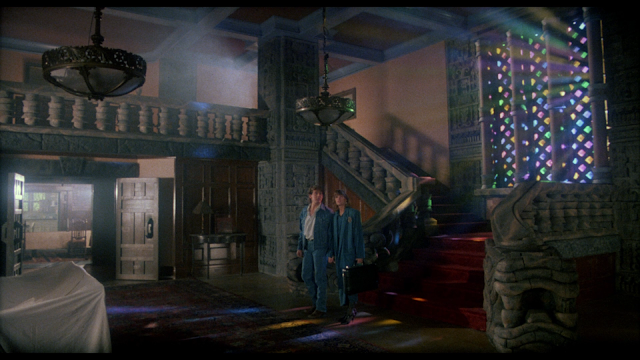 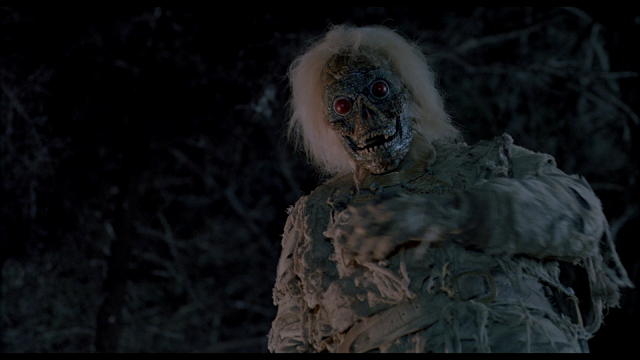 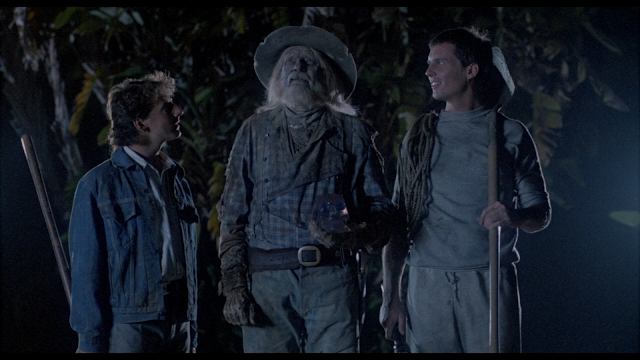 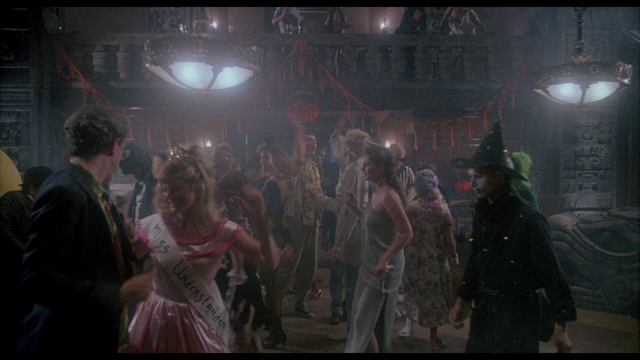 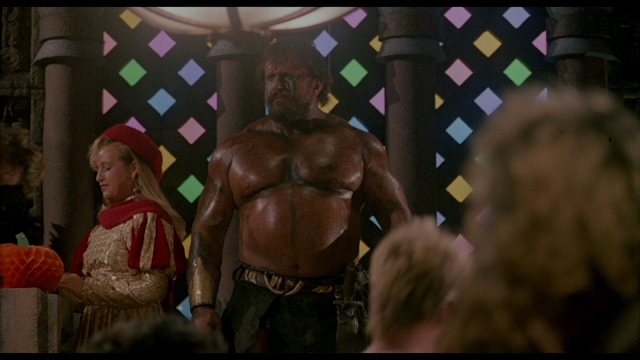 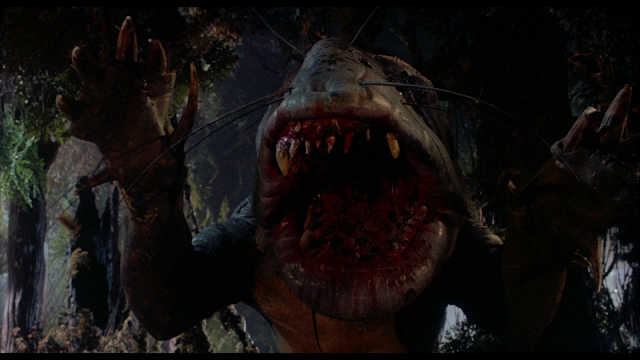 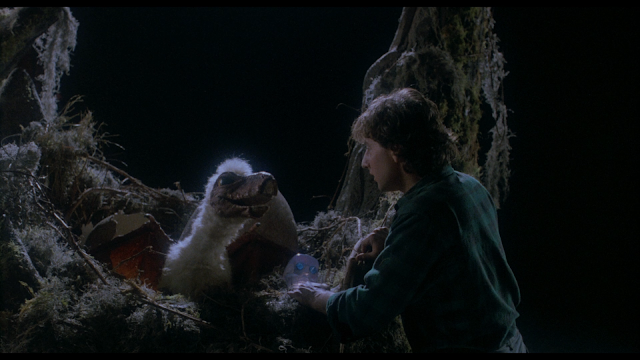 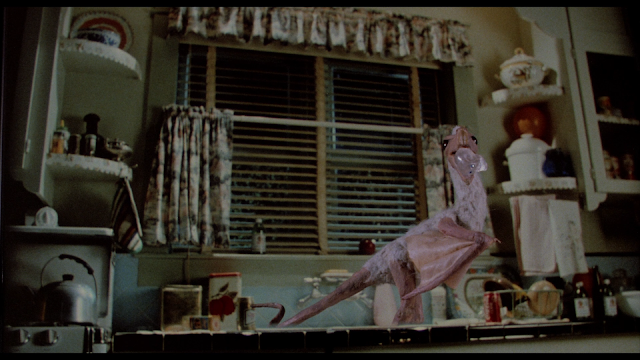 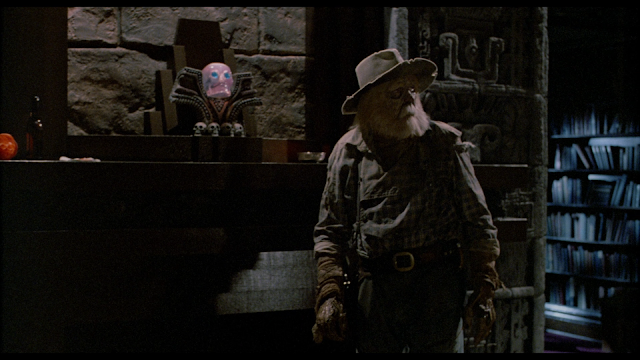 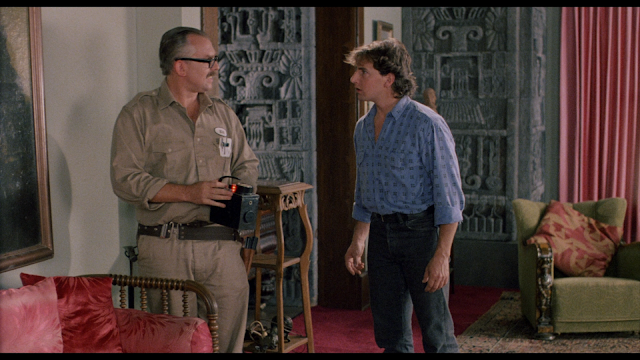 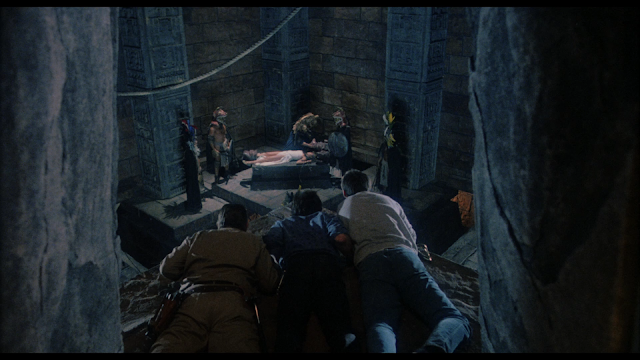 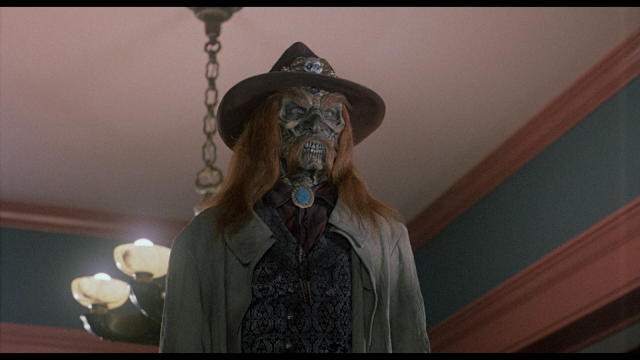 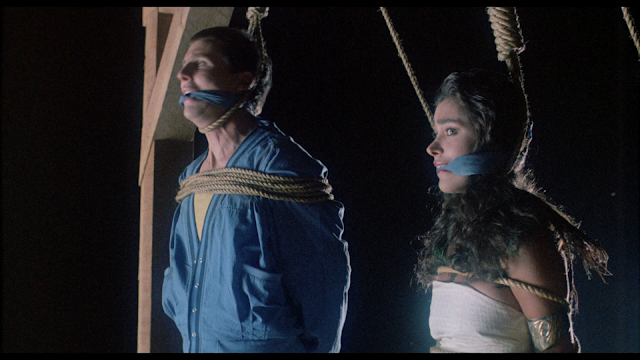 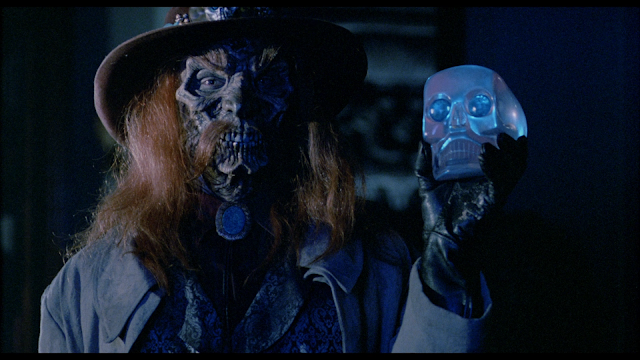 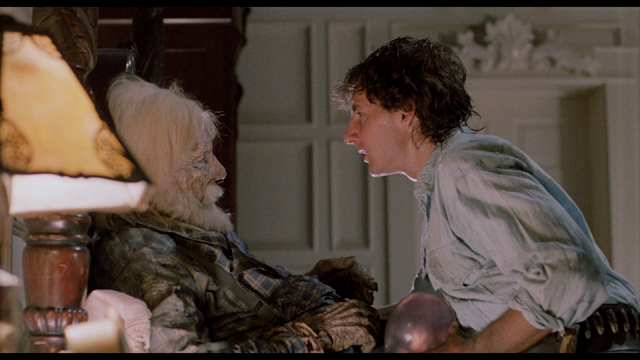