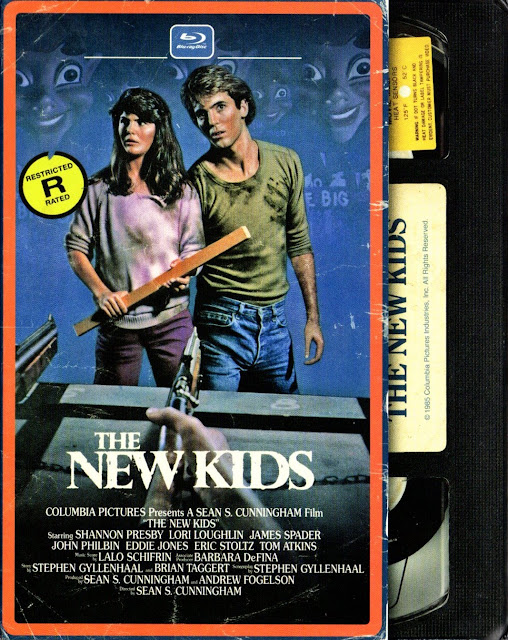 
Gideon: Somethin' botherin' you, cousin?  Loren: No. Nothing never bothers me.
Gideon: Well, if I was you I wouldn't bet no money on that. 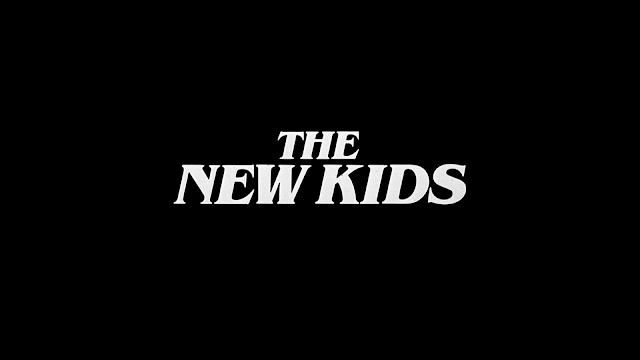 Abby McWilliams and her brother Loren are particularly normal teenagers. Their parents Mac and Mary Beth are killed in an accident. It's decided that Abby and Loren live in Glenby, Florida with their Aunt Fay and Uncle Charlie who own a gas station and an amusement park. Loren and Abby don't have much trouble making friends at their new high school. Loren starts dating Karen, the local sheriff's daughter while Abby starts dating Mark. Loren feels uncomfortable when he sees a blond-haired guy harassing Abby in the lunchroom. Mark tells Loren and Abby that the blond-haired guy is Eddie Dutra, a teenage drug addict who is the leader of a gang of redneck thugs. Loren helps Abby keep Dutra at a distance. Dutra's retaliations keep getting more vicious until Dutra forces a showdown at the amusement park by kidnapping Abby.

The New Kids of the title have to move to Florida after their parents die in the worst of ways in a horror or thriller film: an offscreen car accident. The siblings ( Shannon Presby and Lori Loughlin) move in with their Uncle who owns a gas station/convenience store/amusement park and they are forced to sleep inside a worker's shed. The amusement park isn't open but the gas station and store are and this seems to be where the uncle makes his money. Their uncle is a good man who has lofty goals but treats his niece and nephew right.

The siblings attend the local high school where they meet potential mates as well as get bullied by the hickest bullies I have ever seen in a film. The thing about these new kids is that they know how to fight back as their father was in the military and showed them everything they would need to know about fighting back. There is a scene where, after having their uncle's pristine car scratched to shit by the bullies, the brother breaks in the lead bull's house, while everyone is asleep and makes the bully give him money to get thr car fixed, and at knifepoint no less.

The film is your basic kids get harassed and bullied by a group of evildoers and then those picked on stand up for themselves at the end. There is not really anything new here, but that’s ok when the film is entertaining, and this one is fairly entertaining. The performances are all good, although I do wish that James Spader played his role a bit bigger than what he does here. I just don’t believe what he does at the end of the film. It seems a bit far fetched.

The New Kids is almost a good film. Everything is here to make a really good horror/thriller, but Cunningham just doesn’t push the film into the realm it needs to be in. I do like that Presby and Loughlin know how to protect themselves and actually fight back. The side characters get the shaft in terms of having any character development and that is a shame because these characters would have made the film a lot better because what we do see of them is pretty good. Sean S. Cunningham is a decent director, but I am starting to think that Friday the 13th was the one chance he got to shine. 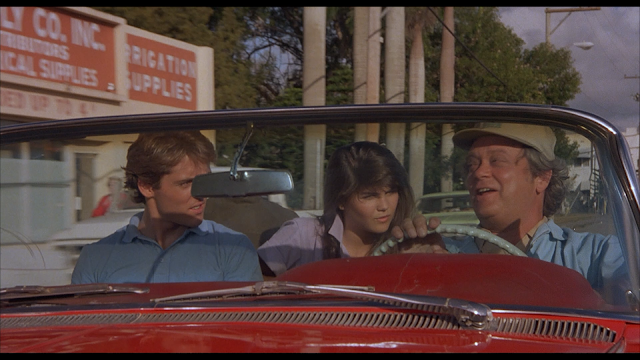 The New Kids is new to blu-ray but this transfer has been used before on Sony's 9wn DVD released fourteen years ago. This would mean that the transfer is shit, but it isn't. Sony usually does a great job in the transfer department and this one has survived the passing of time and Mill Creek does a great job presenting this transfer. Film grain is present even if it is that much and gives the picture that film-like look we all know and love. Skin tones, colors, and detail all look really good although the black levels could be better. 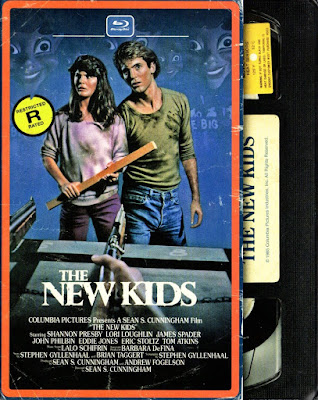 This one of Mill Creek’s retro 80’s VHS packages. The slipcover features the film’s original theatrical poster with the RCA VHS red border with a VHS tape on the right side. 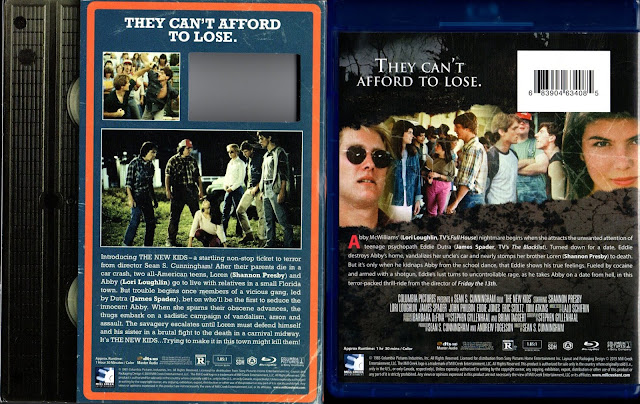 The back features a few stills from the film, the plot summary, and the film’s tagline at the top.

The blu-ray case itself features a photoshopped cover that Sony used for their 2005 DVD. 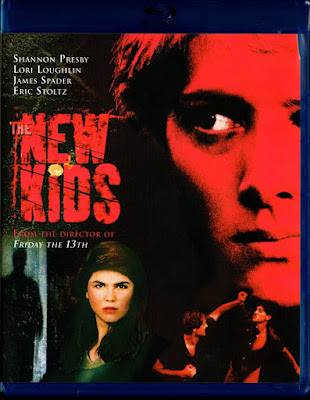 The disc features the same cover art as the slipcover.

I love this style of packaging that Mill Creek has been using for their 80’s films on blu-ray line. Outside of the blu-ray logo and other more modern things about this cover, this is an exact replica of what these VHS covers looked like in the 80’s. The RCA (Columbia and Tri-Star before they got bought by Sony) had a very distinctive red border on the front and back of every one of their VHS releases during the 80’s. Just looking at the covers Mill Creek uses brings back a lot of memories of the different video stores I used to frequent as a kid. The one thing that I do wish that Mill Creek would do is to make the entire front and back covers the VHS box and ditch the videotape on the sides of the covers. I get what they are going for, but it takes away from the awesomeness that is the VHS box art. If they wanted to keep the VHS tape look, they could make the blu-ray out to look like the VHS tape. It would make more sense as both the VHS tape and blu-ray go into the machines to be played. Regardless, I do like these covers and hope that Mill Creek keeps up with these releases. 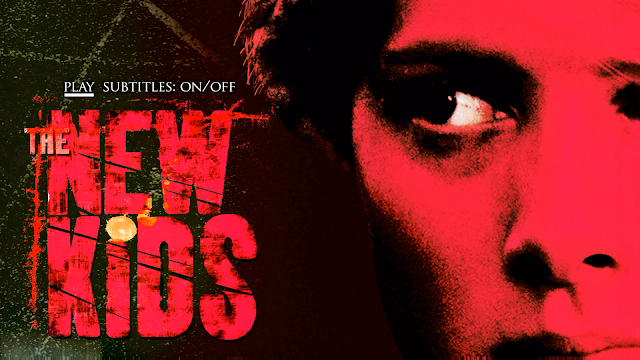 There are no special features to speak of on this release. There is a static menu which lists “Play” and “Subtitles On or Off”. That’s it. This is a budget release from Mill Creek so there wasn’t really any hope of special features being included, but I do wish that they could have included the film’s original trailer, which should be standard on every blu-ray release. 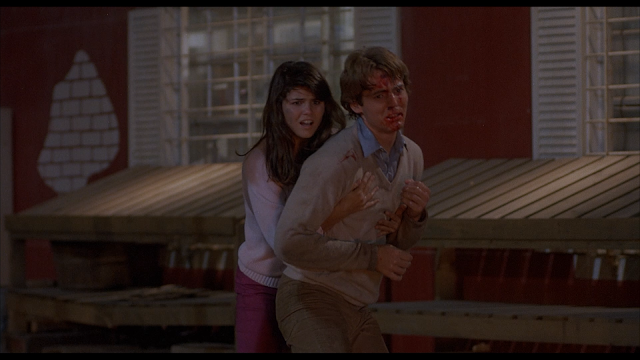 The New Kids is a pretty decent horror/thriller that I wished was better. All the parts are here for a good film, but the material is never taken far enough. The film isn't a waste of time, but it is a bit of a letdown. The Mill Creek blu-ray gives us good picture and audio, but no special features. For $8 can you really complain?