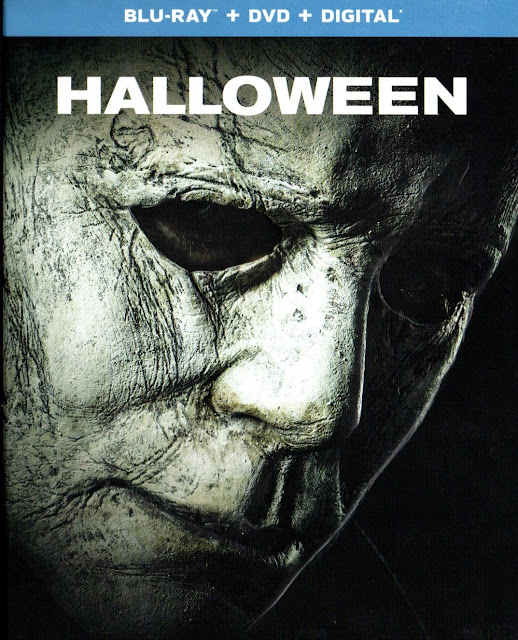 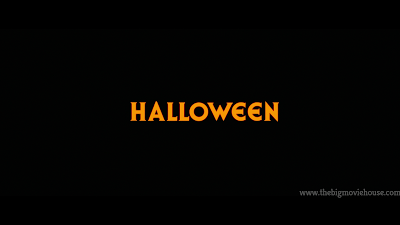 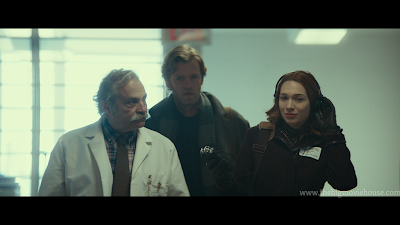 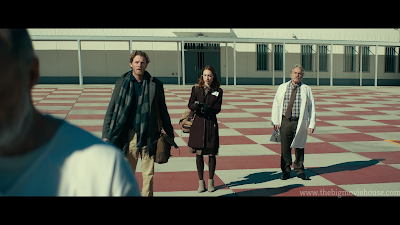 In October 2018, forty years after the massacre in Haddonfield, true-crime pod-casters Aaron Korey and Dana Haines travel to Warren County Smith's Grove Sanitarium to visit Michael Myers. They briefly interview Michael's psychiatrist Dr. Ranbir Sartain, a former student of Dr. Samuel Loomis, before meeting with Michael in hopes of gaining some insight into his past actions before his transfer to a new facility. Aaron brandishes Michael's mask at him, to no effect. In Haddonfield, Illinois, Laurie Strode is living an isolated life, having been divorced twice, developed a strained relationship with her family and turned to alcohol. Laurie has prepared for Michael's potential return through combat training. The following night, Michael's transport crashes. Michael kills a father and his son who stumble upon the crashed bus on the road, and steals their car. The following day, on Halloween, Michael resumes his killing spree, killing several people at a gas station, including a clerk, a mechanic for his coveralls, as well as Aaron and Dana. He then recovers his mask and heads to Haddonfield. Laurie attempts to warn Karen, and her husband Ray, of Michael's getaway, but they dismiss her concerns..


I, like many other people, was skeptical about this new Halloween film. The director, David Gordon Green, is known for his slow burn dramas and stoner comedies, so he didn’t feel like the right fit for a sequel to one of the best horror films of all time. It didn’t help matters that the one who helped Green pitch the idea to Blumhouse was Danny McBride, a man known for his stoner comedies. Neither of these two guys seemed to be the right person for the job, but it turns out that they were exactly what we needed for this franchise. Green and McBride, along with co-scripter Jeff Fradley, have taken the time and care that was necessary to bring Michael Myers back to the big screen as the force to be reckoned with that he was in the first film. They also brought a lot of filmmaking knowledge to the film that has been missing from the series for some time. There are no jokes at Myers’ expense and he is taken completely seriously. Basically, they made Michael Myers scary again. Add to that the return of Laurie Strode to the series and the man himself, John Carpenter, who is executive producing the film as well as doing the score, along with his son Cody and Daniel A. Davies, and you have yourself one of the best slasher films of the last decade and one of the best films of 2018. 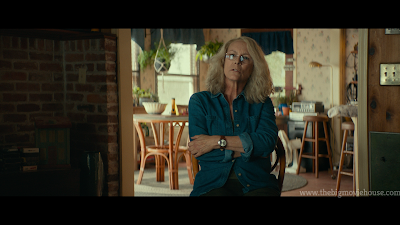 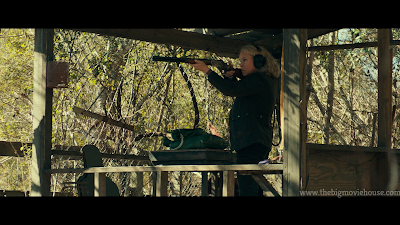 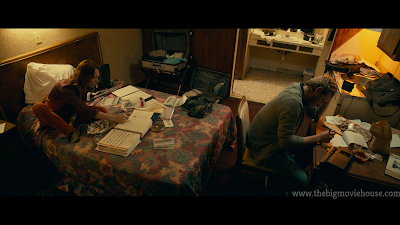 Halloween looks great. Of course, it does, it IS a new film after all, but that doesn’t always mean that the studio is going to present the film the way it should be. Universal, on the other hand, is a studio that cares and they have given Halloween a beautiful transfer here. Detail is very high with the mask seemingly given preferential treatment. You can see all the cracks, bends, and dirt on the mask in full detail. The biggest concern would have been the nighttime scenes, which the film is composed mostly of. Nighttime scenes can give way to some nasty compression artifacts, but here there are no such worries. I found nothing wrong with this transfer.

The sound comes in the form of a DTS X track that sounds great. Sure, the surrounds could have been used more, but I really liked what I heard. The dialogue is crisp and clear, the effects sound wonderfully nasty at times, and the score, oh man that score, sounds so great here. There are also Spanish and French language tracks for those who prefer that. 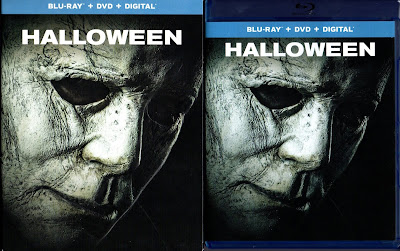 Halloween comes to us courtesy of Universal Pictures.

The first thing you will notice is the slipcover. The mask is embossed which is a nice touch. I could do without the ugly blue banner at the top, but that it is how blu-rays for newer films are these days so I guess I can live with it. 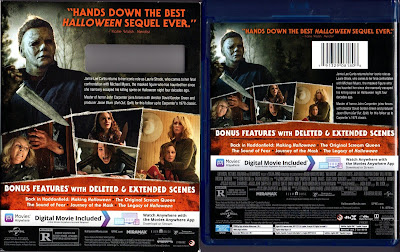 The blu-ray case features the same front and back cover as the slipcover just without the embossing.

The discs, one blu-ray and one DVD, are all black and plain looking. 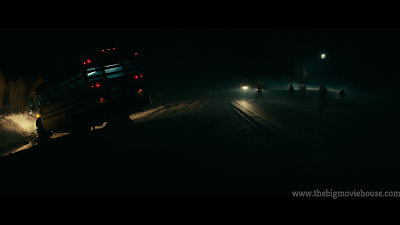 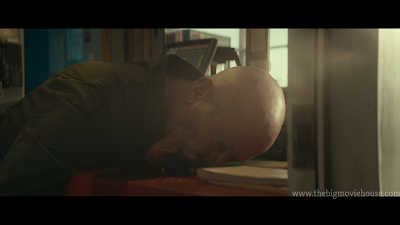 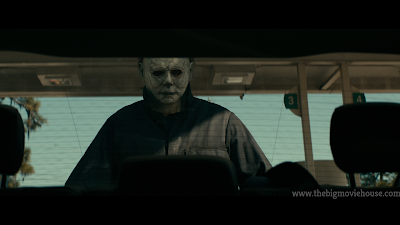 Back in Haddonfield: The Making of Halloween (2m 32s, HD) Cast and crew talk about the film, their favorite kills, and the legacy of the series.

The Original Scream Queen (2m 32s, HD) Cast and crew talk about Curtis and what it was like to bring her back.

The Sound of Fear (3m 19s, HD) A fantastic, if all too brief, look at how the score was created.

Journey of the Mask (2m 33s, HD) A look at the love and care that went into creating the mask for the film. 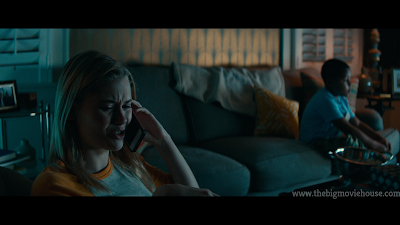 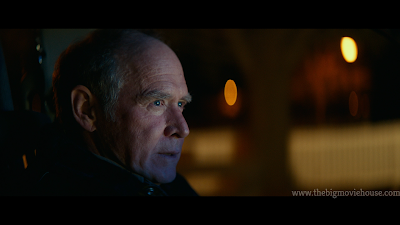 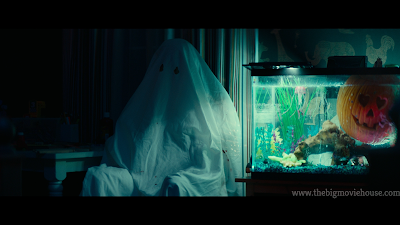 Halloween is a great slasher film. I know that it is hard to comprehend that for some, but it is true. The characters are ones that we care about, the filmmaking is impeccable, and the score is the thing of wonders. I don’t have any problems with the film and really loved the two times I have seen the film. The blu-ray is really nice too. The picture and sound quality are just wonderful, and though I do wish that there were more special features, it is the a/v quality that counts. Hopefully, there will be a special edition down the line that dives a bit deeper into the film, but for now, we have a really good blu-ray for the film. 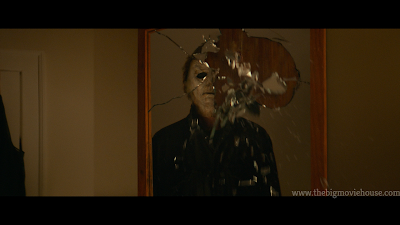 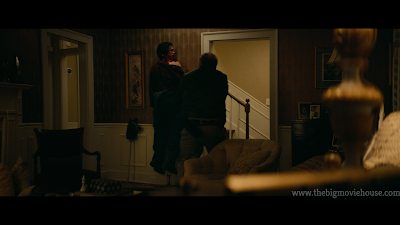 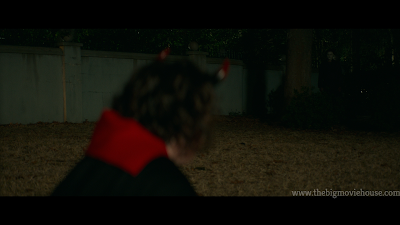 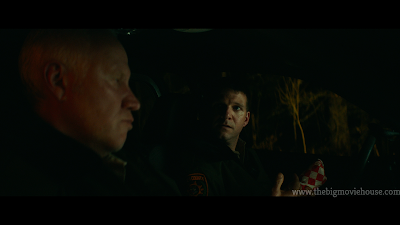 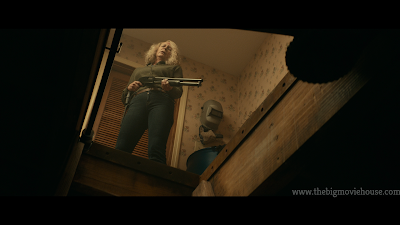 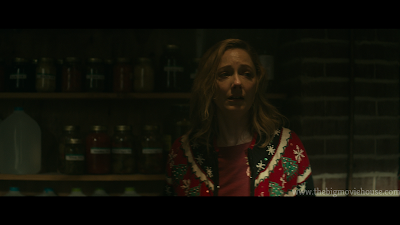 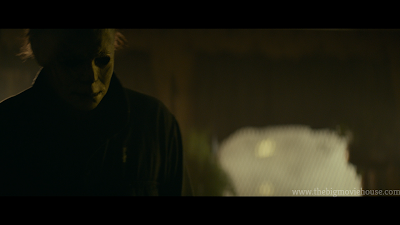 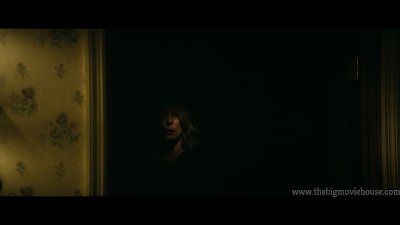