In the Mouth of Madness (Scream Factory) Blu-ray Review + Screenshots 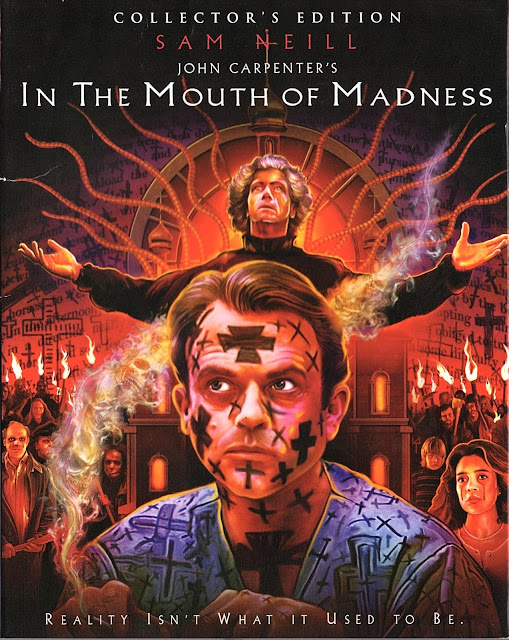 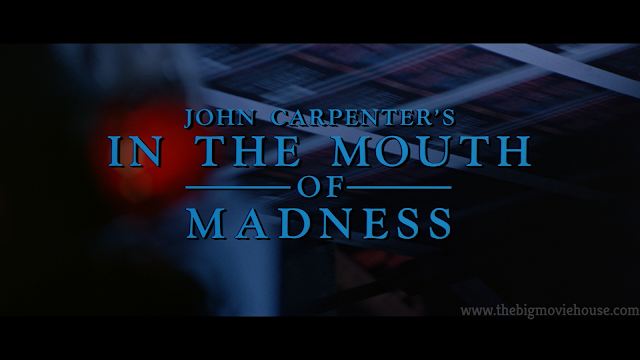 
The efficient and skeptical freelance insurance investigator John Trent is hired by the publisher Jackson Harglow to find where the famous writer Sutter Cane might be. After writing a series of best-sellers in the horror genre, affecting the reason and causing disorientation, memory loss, and paranoia in readers, Sutter has simply vanished near the release of his new novel, "Horror in Hobb's End." There is mass hysteria of his anxious fans waiting for the new release, and John believes that his disappearance is a marketing strategy. John follows his instincts and travels with Cane's editor, Linda Styles, to New Hampshire, seeking for the apparently fictional town of Hobb's End. While driving along in the night, Linda reaches Hobb's End, and John discloses that Sutter Cane has unleashed a powerful evil force in the black church of the mysterious town, and his twisted imagination is changing the reality and perception of those who read his novels.


While I would not categorize In the Mouth of Madness as one of the Carpenter's best, the film is still very good. The atmosphere that Carpenter creates is amazing and something that we don't really see anymore in horror films. This is an "adult" horror film that makes the audience think and pay attention. While there are a few jump scares, the majority of the scares come from the story and atmosphere. 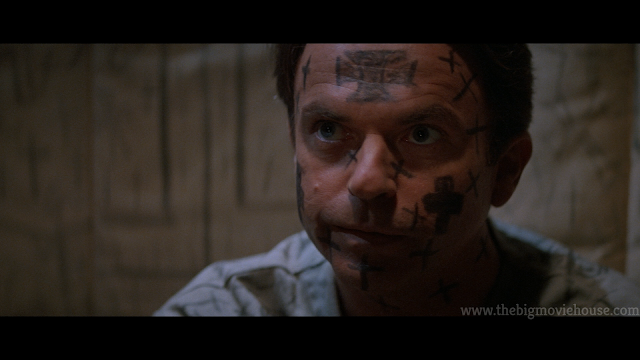 Coming from a brand new 4K scan of the original film elements, In the Mouth of Madness looks great. Colors are vibrant when they need to be but also muted when the time is right. There is a thin layer of grain which gives us some nice detail, but also reminds us that we are watching something that was shot on film. 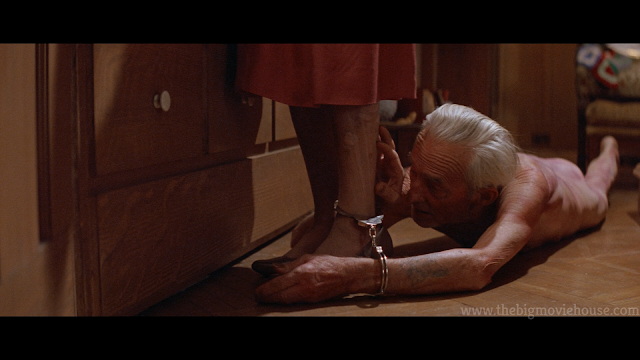 Armed with an English DTS-HD 5.1 track, In the Mouth of Madness sounds nice. The sounds get a good workout as the film becomes more intense, but there is also a nice quietness to the track as well. The score, by Carpenter and Jim Lang, sounds great, especially the opening track. 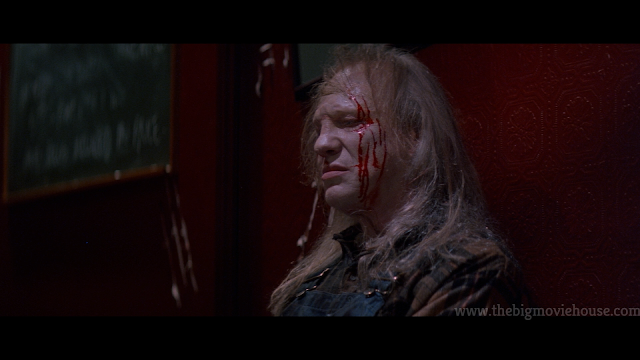 In the Mouth of Madness comes to us courtesy of Scream Factory. 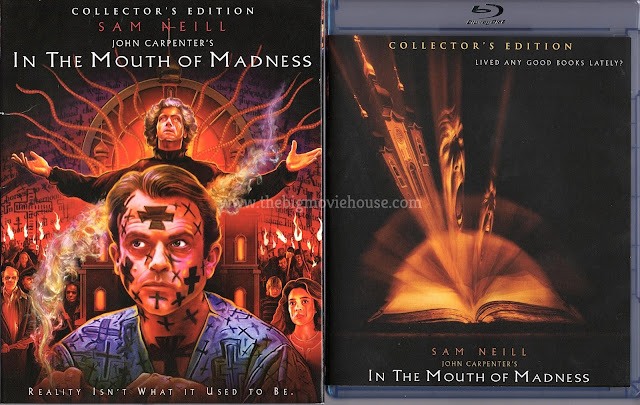 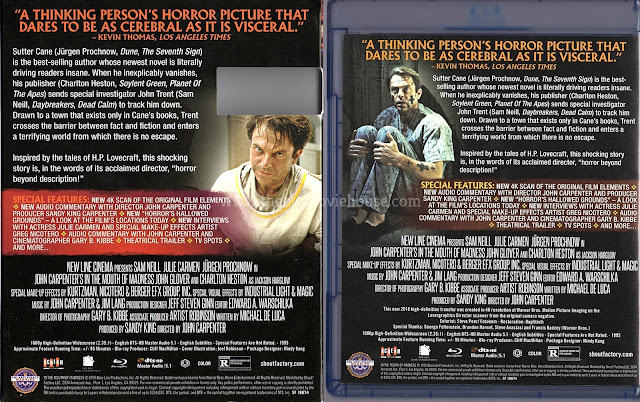 The reverse cover art is that of the film’s original theatrical poster. 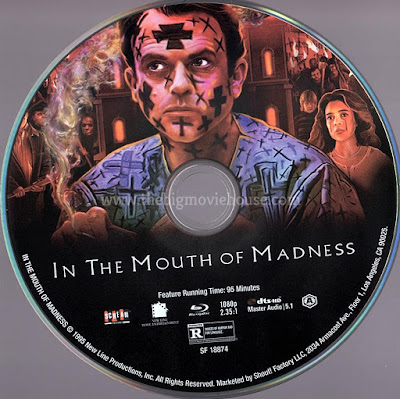 The disc features the same commissioned artwork that graces the front cover and slipcover. 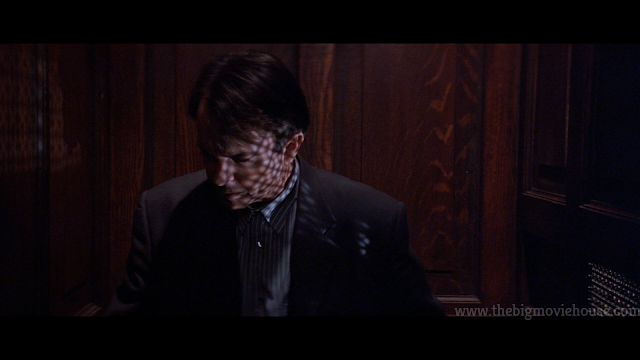 Horror’s Hallowed Grounds (11m 30s, HD) Sean Clark takes us on a tour of the film’s Canadian locations even if he can’t get into all of them.

The Whisper in the Dark (9m 46s, HD) Julie Carmen sits down for this brand new interview to talk about her work in the film, what she brought to the role, and how much she admired Carpenter’s work ethic on set. She also talks about a love scene that was shot (not found on this disc) and the alternate ending (also not on the disc).

Greg Nicotero’s Things in the Basement (16m 34s, HD) One of the three founders of KNB, Nicotero talks about his time working on the film’s effects. He details the film’s monsters and talks about how they were done. He also covers what it is like to have a skeleton crew doing makeup on a Hollywood film and talks about the deleted scene that Julie Carmen talks about in her interview.

Home Movies from Hobb’s End (12m 7s, SD) VHS footage shot during the making of In the Mouth of Madness that shows us the monsters and effects used in the film as well as some that weren’t. This is a great feature as it gives us a look behind the curtain to see how the effects were done.

Vintage Featurette: The Making of In the Mouth of Madness (5m 2s, HD) An older behind the scenes piece that aired on TV back when these things would be put on TV.

Commentary with director John Carpenter and producer Sandy King Carpenter Here we have the husband and wife team talking about the film in a pretty fun fashion. There are a bunch of dead spots throughout, but the two play off of each other very well. Lots of stories to be told and we get a peek at what is really like to be a producer on a Hollywood film.

Commentary with director John Carpenter and cinematographer Gary B. Kibble Ugh. This is one boring commentary that keeps getting worse as the track goes on. You would think that Carpenter would provide a great commentary track here as he has done on so many of his other films (and films he had nothing to do with as well), but this track was boring when it first appeared on DVD back in the day and it has aged so poorly. 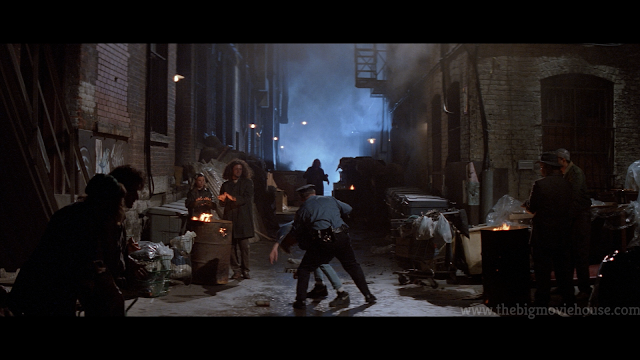 In the Mouth of Madness is a fun, mature horror film that was destined to become a cult classic. Audiences stayed away because the film doesn’t provide many jump scares and it made the audience think during a time when they wanted disposable horror films. Had the film been released today, I think that it would have fared much better with audiences. The film is a blast to watch and has some really effective scares. Carpenter is known for getting the most out of the budget and he makes the film feel a lot bigger than it is.

The blu-ray, from Scream Factory, is great. The picture quality is such a step up from the previous releases of the film that it rightfully takes the place of and the sound quality is good as well. The special features are nice with a wonderful commentary from the Carpenters (not the music group) and some really fun interviews. The best feature is the VHS footage that KNB shot of all the effects in action. This is a blu-ray that will make fans happy and belongs in the Carpenter collection that Scream Factory seems to be trying to build. 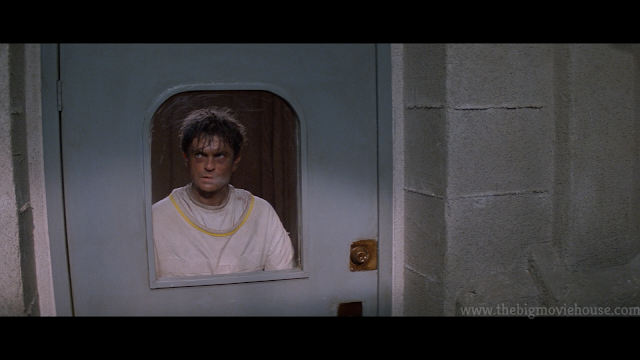 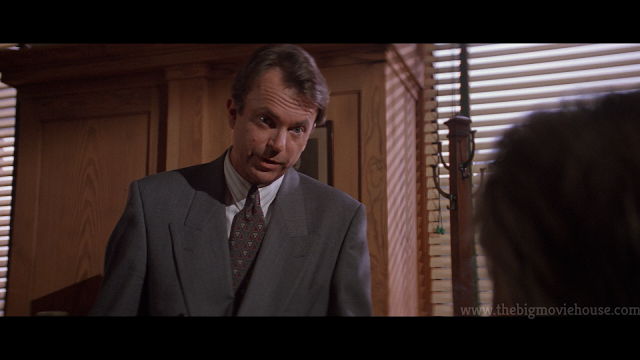 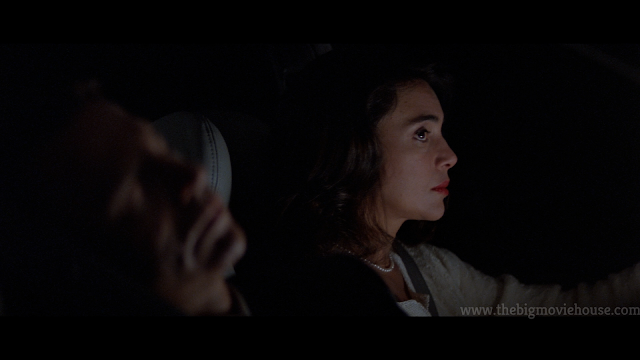 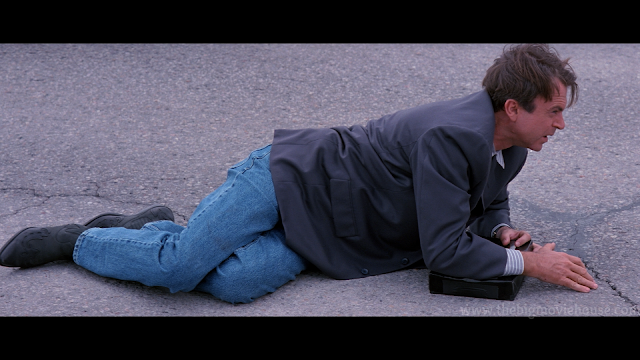 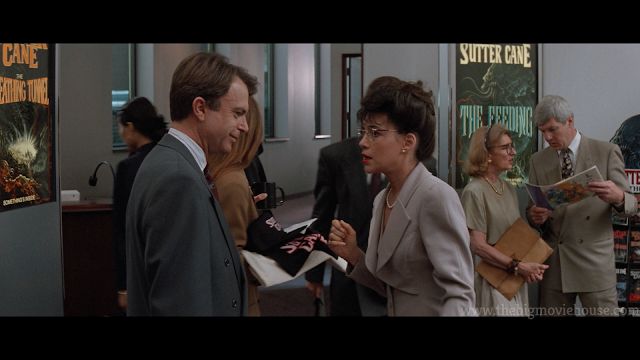 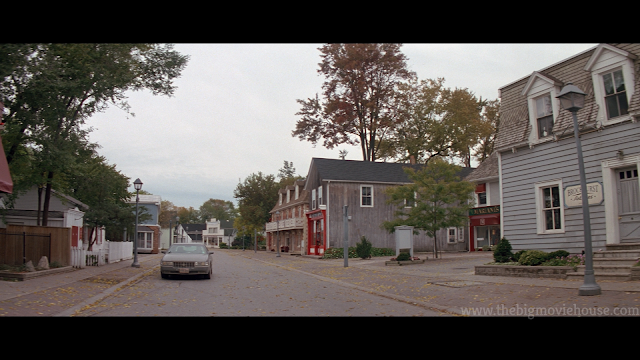 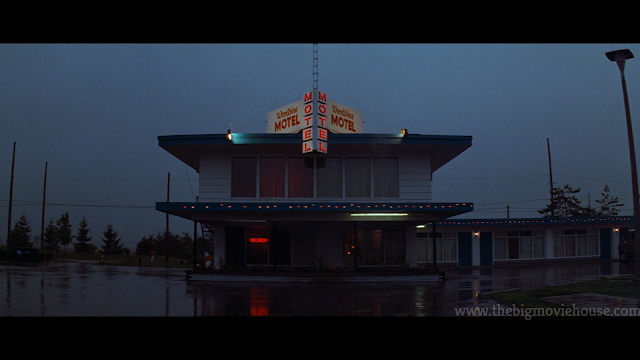 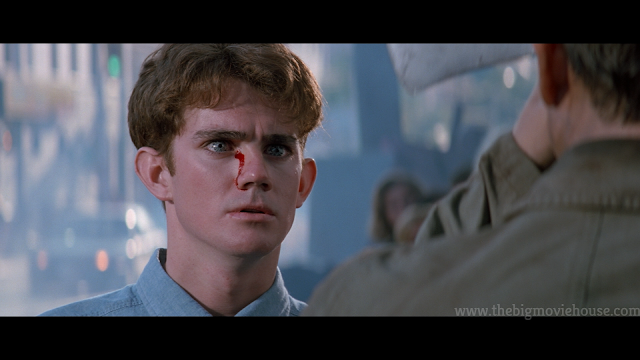 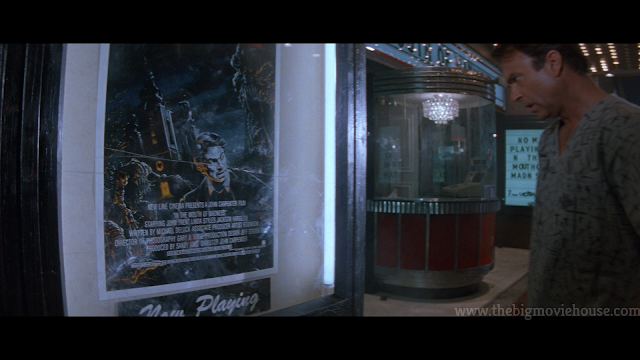