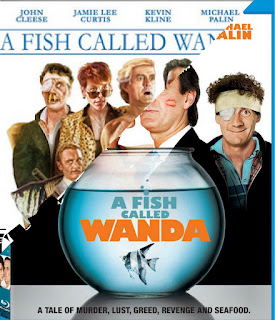 A Fish Called Wanda is a film that has not aged well. The comedy falls flat most of the time, and the stuff that does work isn't worth watching the whole film for. The actors in the film are wonderful and are giving it their all, but the film just drags along. 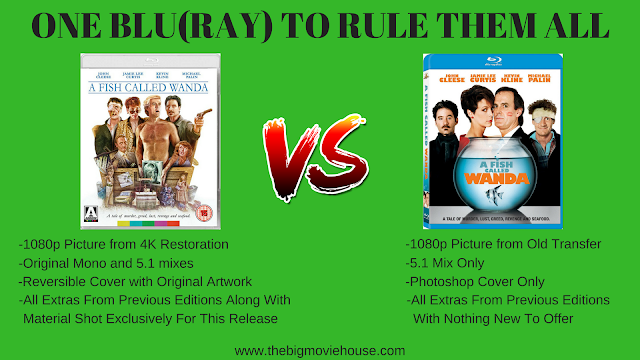 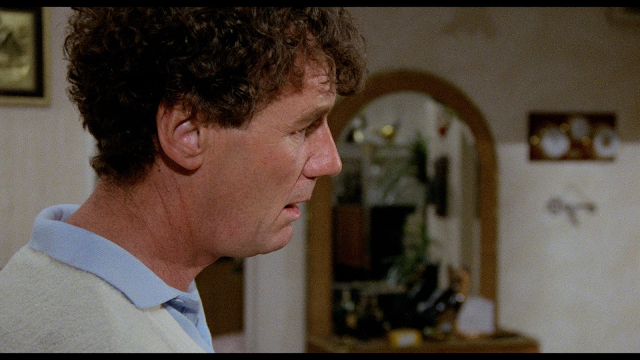 This 1988 documentary was shot during the filming of A Fish Called Wanda and features a lot of behind the scenes footage, something that is sorely lacking on this disc. Cleese, along with his co-stars Michael Palin, Jamie Lee Curtis, and Kevin Kline all sit down for semi serious interviews about the film and working with each other. This is the type of documentary that was made back in the day and I wish that companies would put out more like this rather than sound bite featurettes.

For the film's 15th Anniversary, Fox and MGM put together a nice special edition dvd that included all of the featurettes and deleted scenes found on this disc, minus two that were produced by Arrow Video. This featurette takes a look back at the film, how no one thought it was going to work other than those who made it, and it turned out to be a big hit. Cleese, Palin, Curtis, and Kline are all back to talk about the film.

I found this featurette to be a little more stale than the previous featurette because this one is just talking heads intercut with footage from the film. Anyone can make something like this. There is still some new information to be found, but the execution is by the numbers.

This is the first of two featurettes produced by Arrow for this release. Writer Vic Pratt sits down to talk about his love for the film. He mainly throws out information that can be found elsewhere on the disc and doesn't really offer anything else that we don't already know about the film, the actors, the director, and so on. I was hoping that this was going to be a visual essay, the kind that are made for Arrow, that would have been about the politics involved in the film or something like that. Instead, we get a guy who talks about why he loves the film without giving us much more than that.

Leach was the production designer on the film and he has some great stories to tell. He tells a story about how the fish that plays Wanda was picked out and how it died that same day. This is a good interview that could have been longer as we can tell that Murray-Leach has more stories to tell. This is the second and last special feature produced by Arrow for this release.

Robert Powell takes us around to the different locations used in the film, while another man, whose name I can't remember, gives the history of the film that we have heard a dozen times already. While it is nice to see how far removed we are from a film through its locations, I was very bored with this. Powell and the other guy have no energy and seem like they don't care, but in an English way.

Introducing himself as Meryl Streep, Cleese takes up the whole, almost five minutes, to give us joke after joke. I actually found this, everyone is going to hate me, better than the film itself.

The following scenes can be played together or separately. Cleese introduces each scene and gives us a bit of information about why they were cut.

A good trailer that doesn't give away the twists and turns of the film for once.

I can not give a review of the packaging because this disc was sent to me as a screener. I have included a few shots taken from Arrow Video's Facebook page. I do not own any of the photos below: 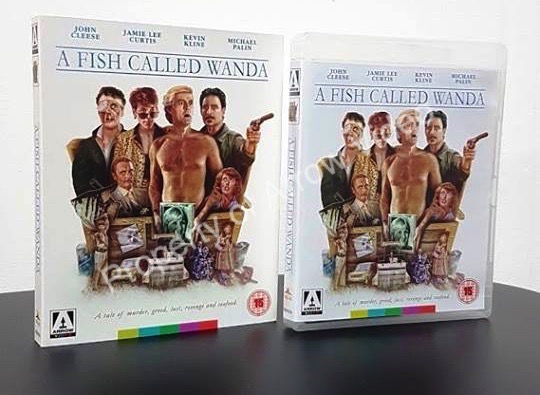 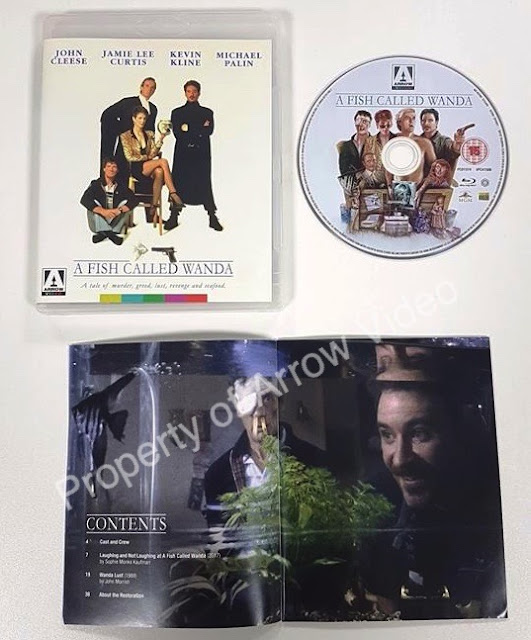 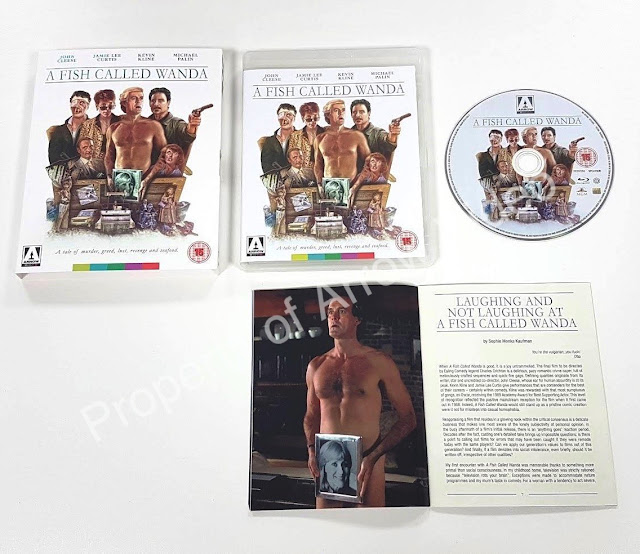 As you can see, Arrow has done a nice job with this disc. The original artwork is there, the commissioned artwork is lovely and the booklet is probably a nice read.

The Arrow disc is REGION FREE 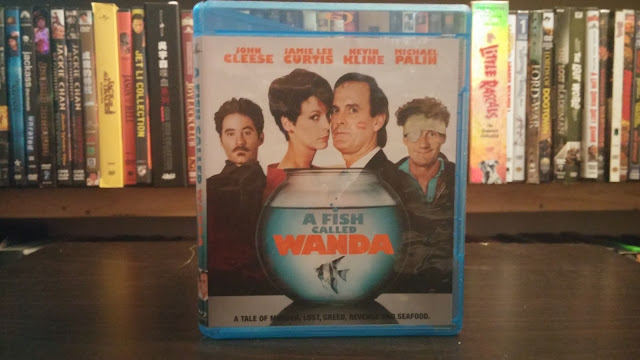 The Fox/MGM disc features some terrible photoshopped nonsense on the cover. 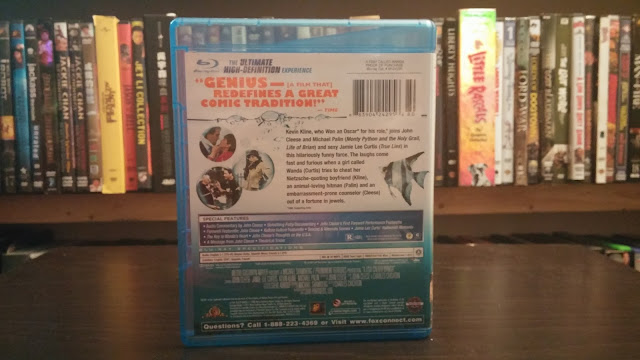 The case for this blu-ray is one of those dreaded eco-cases, which can damage the cover. 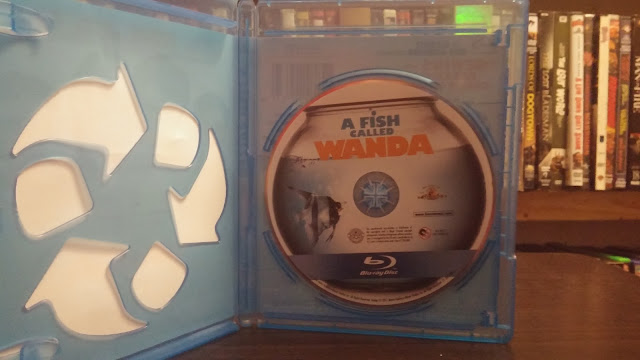 The disc art is of the fish Wanda inside a fish bowl.

Arrow Video has done a brand new 4K restoration from the original negative on this one and the results are night and day. The first thing is that they cleaned the film up. The Fox/MGM blu-ray was muddled with scratches, debris, hairs, and specs of dirt. That blu-ray is not a good representation of the film. Arrow has gone and cleaned up any instance of the above to provide us with a nice, clean print of the film.


The Arrow version also has slightly different framing. The Fox/MGM blu-ray's framing is way too tight, leaving little breathing room. The Arrow blu-ray opens up the framing, letting it breathe and feel more like how the framing should have been.

The Fox/MGM blu-ray was also too dark. Look at Kevin Kline's coat in the images above. In the Arrow version you can see, not only the wrinkles in the sleeve of his coat, but you can also see the textures, which comes from the uptick in resolution in the transfer. It is a 1080p transfer, but it is coming from a brand new, cleaned up 4K master, so there is going to be a lot more detail in the image.

Arrow has done a great job making A Fish Called Wanda look new again. I watched both versions of the film and I didn't find anything wrong with the Arrow version. When framing changes on an Arrow blu-ray release, people start getting jumpy about whether the framing has been screwed up on the Arrow blu-ray like what happened with Hellraiser III: Hell on Earth and Creepshow 2. I can tell you now that no such thing has happened here. The Fox/MGM blu-ray is clearly the wrong framing and the Arrow blu-ray has fixed that. 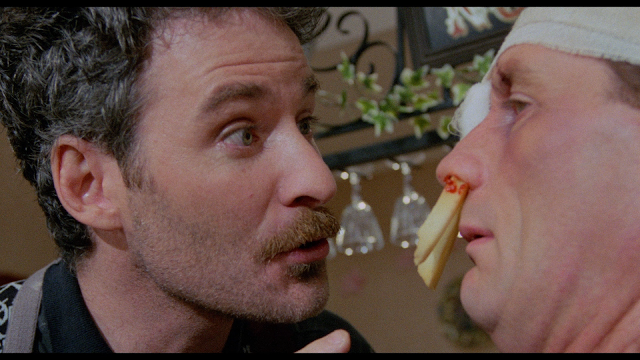 A Fish Called Wanda is not an effects heavy film, nor does it need a fancy 5.1 track that would get wasted on background noises and nothing else, so it is nice that we get the film's original mono track in LPCM form. The track is really good, but like I said, there is not that much happening, so dialogue doesn't get bogged down by gunshots, traffic noises, or anything else that could be out onto this track. The dialogue is crisp and clean and there are no distortions in the track.

The Fox/MGM disc features only the DTS-HD Master Audio 5.1 track and it is ok. The sound never really jump out. It just kind of lays dormant, hoping that it'll get the chance to shine. It never does. Dialogue is clear and there are no distortions to the track, but that's really all the good that can be said. 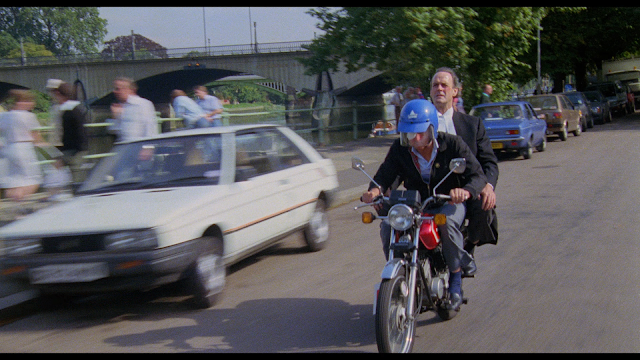 Cleese plays Archie Leach, a weak-willed barrister who finds himself embroiled with a quartet of ill-matched jewel thieves – two American con artists played by Jamie Lee Curtis and Kevin Kline, Michael Palin’s animal-loving hitman and London gangster Tom Georgeson – when Georgeson is arrested. Only he and Palin know the whereabouts of the diamonds, prompting plenty of farce and in-fighting as well as some embarrassing nudity and the unfortunate demise of some innocent pooches…


I was late to the party with A Fish Called Wanda. The film came out when I was a kid, and I always meant to watch it, but didn't get around to it until the film's 15th Anniversary dvd was released. I remember buying the dvd at my local Best Buy and going home to watch it....and I was disappointed with the film.

It isn't that the film has a crappy cast. The cast here is a great cast. John Cleese is at the top of his game, Jamie Lee Curtis is as sexy as ever and is also very funny, and Michael Palin almost steals the show. The real star of the film though is Kevin Kline, who would go onto win an Oscar for his work in the film. He is hilarious and menacing at the same time and you never know how dangerous he is in the film. The scene where he eats Palin's fish one by one is probably the reason that he got the Oscar.

So, why was I disappointed with the film. I have to say that it just didn't hold my interest. I didn't care about the key or the diamonds, and I think that it was written that way, but you got to give us something to care about or the film just doesn't work.

The romance? Oh yes, the romance. I always have a hard time enjoying romances in films like this because the initial romance is based on lies. Here, Curtis pretends to love Cleese so that she can find out where the diamonds are hidden. By the end of the film we are expected to believe that Curtis is actually in love with Cleese. I find it hard because it just pops up out of the blue. And, what about what happens after the film ends. Do you really think that Curtis is going to stay with Cleese? That is what the film wants us to believe, but I doubt that she will. Once you taste that thrill of armed robbery and conning others out of things that you want, I doubt that many people would be ok with domestic life.

The best scenes in the film are the scenes with Michael Palin trying to kill an old lady who saw Tom Georgeson in the getaway car. The old lady always takes her three dogs out for a walk at the same time every day, so Palin tries to off the lady at this time, but ends killing one of her dogs every time. With Palin's character being an animal lover, it makes the scenes that much funnier.

A Fish Called Wanda is not a bad film. There is too much energy and talent for it to be a terrible film. There are enough laughs to keep me from giving the film a lower score, but I do find the film kind of a slog to get through. I have seen the film three or four times, but the film doesn't connect with me. I laughed my ass off at some of the jokes, but just as many fall flat. The way I look at A Fish Called Wanda is like key lime pie. It is an acquired taste and I just don't have that taste. 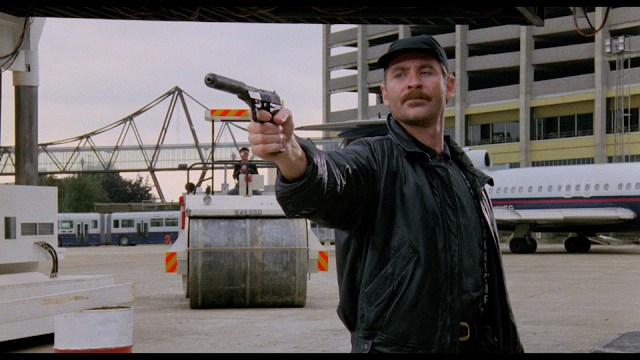 A Fish Called Wanda is a decent film that doesn't do anything for me. I like the actors and some of the scenes are very funny, but the overall film just doesn't gel with me.

The Fox/MGM disc is not very good at all. The picture looks ok at best, and the sound isn't very much better. The only thing that the disc gets right are the special features, which are very close to what Arrow has on their disc (all of the special features from this disc are ported to the Arrow disc) which makes them about even on that front.