Dreams Can Be A Killer: The Slayer (Arrow Video) Blu-ray Review + Screenshots 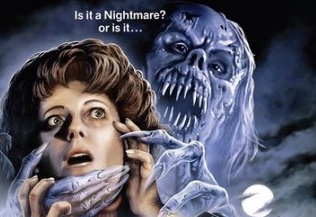 The Slayer is a nice little slasher film that takes dream into account inside of it's madness. The film has a very creeping feel to it and the filmmakers are able to keep this feeling all the way until the end. The effects are really well done and kind of gross at the same time. 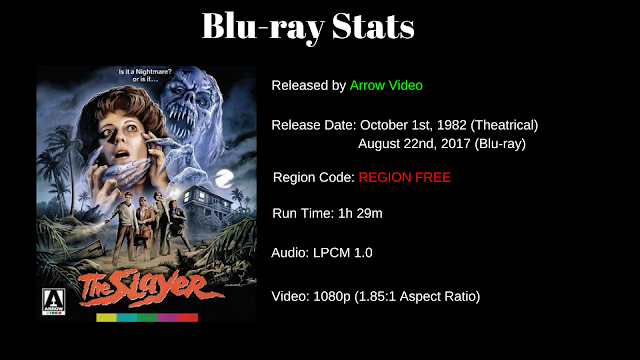 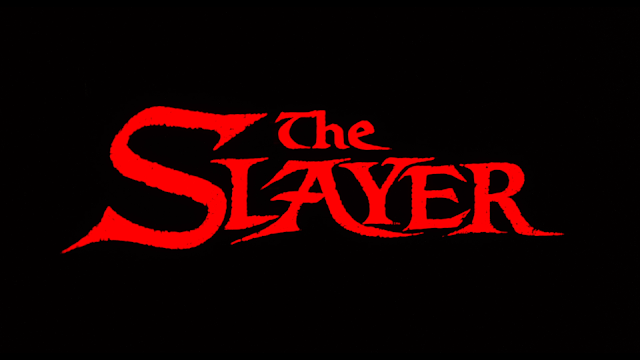 The Slayer was born out of love for the genre and was shot during the first leg of the slasher movie boom. Here we are given a detailed history of the film and where the idea for the monster came from. We are also given a detailed look at how the effects were done. The effects hold up to this day. This is a fun little trip down memory lane.

Arledge Armenaki, who was the second unit photographer on the film, takes us on a tour of the locations and gives us humorous stories about the shooting of the film.

The Q&A can be played by itself as well.

Gives away a lot of the film along with what the monster looks like.

This track is moderated by Arrow Video's Ewan Cant and is pretty good. Cardone takes
charge of the track and does the most talking. One of the biggest revelations is that Cardon
does not think that this is a slasher film. He likes to think of it as a psychological thriller
and does not like that it gets lumped in with films like Halloween and Prom Night (the two
films that he mentions). He talks about the films that he drew from when making the film
as well as the shooting conditions and working with the cast.

-Commentary with The Hysteria Continues

Michael Felsher of Red Shirt Pictures sits down with the composer of the film, Robert Folk.
The interview lasts for the first 49 minutes of the track and covers Folk's beginnings in the
industry, how he got the job on The Slayer and how his score for the film has lead to bigger
and better things. This interview is followed by the "isolated score selections" which means
the rest of the film. The score sounds great without the dialogue and sound effects getting in
way.

This is the same track that was featured earlier in the special features under The Tybree
Post Experience. If you watched that then you have watched this. 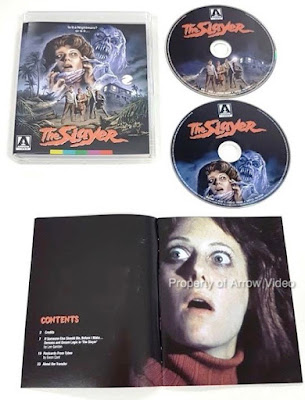 I was sent a screener for review and thus I can not review the packaging. There are pics on Arrow's Facebook page, but I have uploaded a few of them here to give you a taste of what Arrow has in store for us on August 22nd. 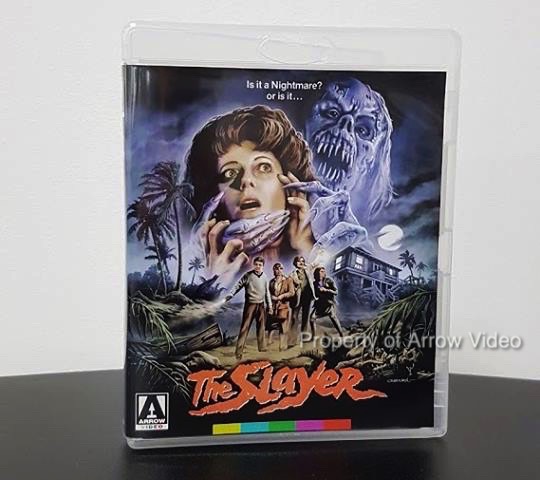 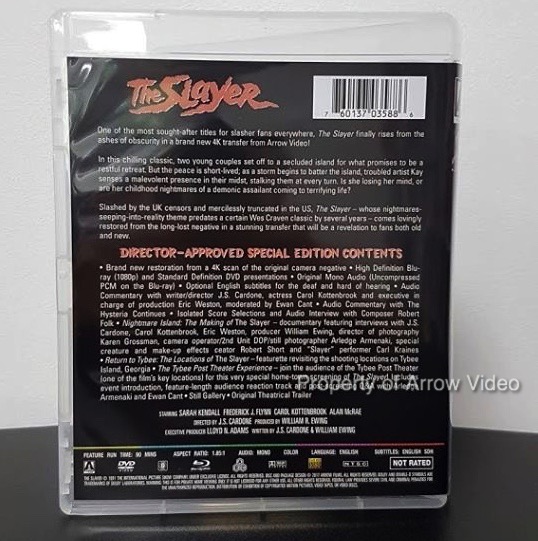 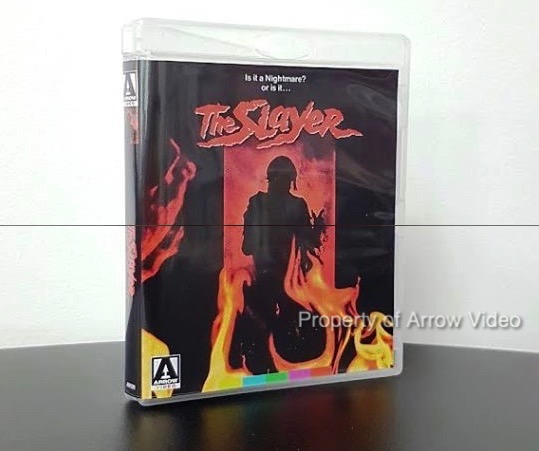 As you can tell, the cover art is reversible with commissioned artwork on one side and the film's original theatrical poster on the other side. There is also a booklet with writings on the film as well as tech info about the transfer. This release is a combo release with the film and special features residing on both the blu-ray and dvd.

Both the blu-ray and dvd are REGION FREE. 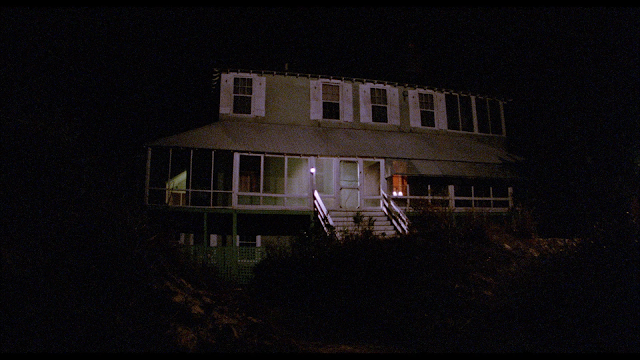 When it comes to small films like The Mutilator, Blood Rage, or, in this case, The Slayer, I never expect much when it comes to the video or audio. We all know that prints can get lost or damaged over time and horror fans need to set their expectations lower than usual. That is why I am surprised that The Slayer looks as good as it does. The film doesn't have a sordid history like The Mutilator or Blood Rage do (even if this film did end up on the Video Nasties list in the U.K.), so there wouldn't be as much hunting for different prints. The Slayer does look phenomenal. There is a nice layer of grain that reminds us that we are watching a film and not some digitally made movie. The colors are accurate and some even pop off the screen. A lot of the film takes place at night, but I didn't detect any black crush. The film just looks great. 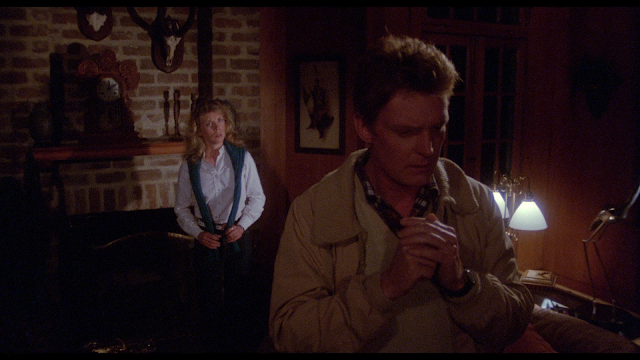 The LPCM Mono track presented here is really good. I think that the film would have benefitted from a stereo or surround mix, but that is not how the film was made. Given that the film is mono, the track is surprisingly effective. Dialogue is crisp and clean and the score puts us right there with the characters. The film is very creepy and the track captures all of it. A great track for a great film. 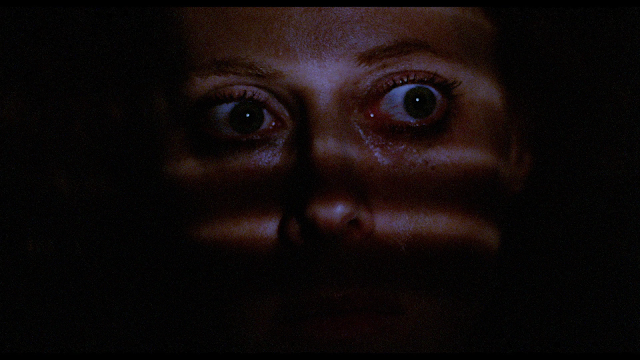 Two young couples set off to a secluded island for what promises to be a restful retreat. But the peace is short-lived: as a storm batters the island, troubled artist Kay begins to sense that a malevolent presence is here with them, stalking them at every turn. Is she losing her mind, or are her childhood nightmares of a demonic assailant coming to terrifying life?

I had a lot of fun with this film. When Arrow announced the film, the forums lit up with talk about how this film was a precursor to A Nightmare on Elm Street, released two years after The Slayer, and, while I can see where they are coming from with the whole dream aspect, these films couldn't be more different.

The Slayer takes place in an isolated place, an island, where help can not be attained, both due to the isolated nature of the house and the storm that is hitting the island pretty hard. A Nightmare on Elm Street takes place in suburbia where help can be obtained with minutes. Both films do deal with dreams, although Nancy, the lead character in A Nightmare on Elm Street doesn't see the her friends being slaughtered by Freddy. However, the titular character in The Slayer doesn't kill the dreamer in the dream, but let's the dreamer watch as he (?) kills her friends who decided to come to this isolated house.

The Slayer does something unique in that it doesn't show us the killer until later on, so there is a mystery to it. While slasher films have done this in the past, The Slayer upps the ante by not telling us what the killer is. We know from the first scene that the killer is not going to be a human, but a monster, and the film leaves the reveal of the monster/killer until the very end of the film. I was surprised by the reveal because I had no idea what this thing was going to look like.

Like many good horror films of the 80's and beyond, The Slayer has some really great gore effects. Because of the limited cast in the film (there are only 6 speaking roles in the entire film), the effects are not that numerous, but when they do show up, they are wonderful. A very real looking decapitated head makes a surprise appearance as does the first ever upper body "stab through" effect, with a person being stabbed through the back and out the front of the chest with a pitchfork. All of the effects in the film are really well done and even some of them are kind of disgusting.

The filmmakers also do a great job in setting up and maintaining a sense of dread. It isn't the type of dread that became prevalent in 2000's horror films, but the kind that is fun. I had a similar feeling of dread when I watched Black Christmas (the original, not the colorful, but ultimately empty remake.) for the first time, so you know that film is going after a classic in terms of feeling. The filmmakers give us long scenes of the a character looking for someone or something before being killed off in some gruesome fashion. This feeling is gone from most horror films today, but we do get some horror films like It Follows or The Witch, that gives us the same feeling that this film gives us.

The Slayer is a found gem. I had some pretty high hopes for this film based on what people were saying about it after Arrow announced the blu-ray, and I have to say that the film delivered on these hopes. The only thing that I didn't like about the film was main character's husband. He was kind of a dick and was glad when he got offed. Other than that, I found myself really liking this film. 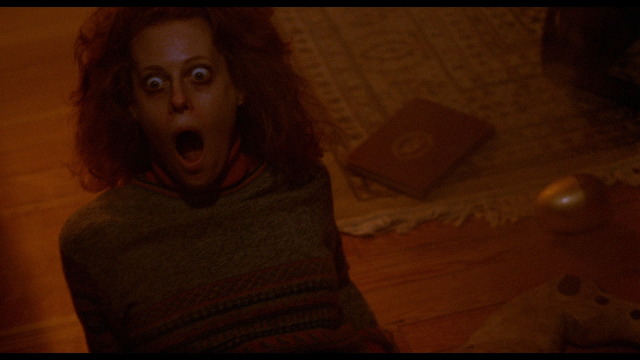 The Slayer is a hell of a film. The film starts out as a normal psychological thriller, but then turns into slasher film, all the while being a monster film of sorts. Almost everything works in the film and I found it to be creepy and gory.

The blu-ray from Arrow Video is amazing. The A/V qualities are incredibly impressive and the special features are entertaining and informative. The commentary with The Hysteria Continues is the highlight of a package bursting at the seams. This is a definite buy.


CHECK OUT PAGE 2 FOR MORE SCREENSHOTS. SPOILERS AHEAD!!! 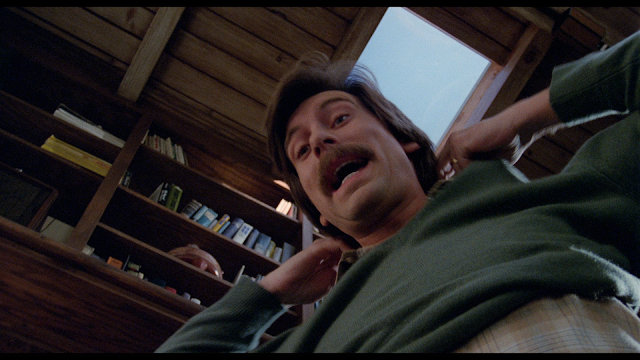 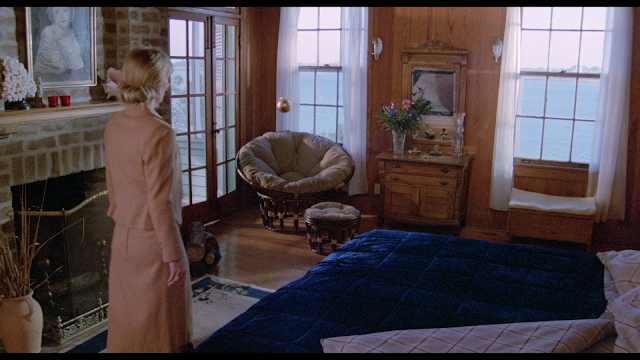 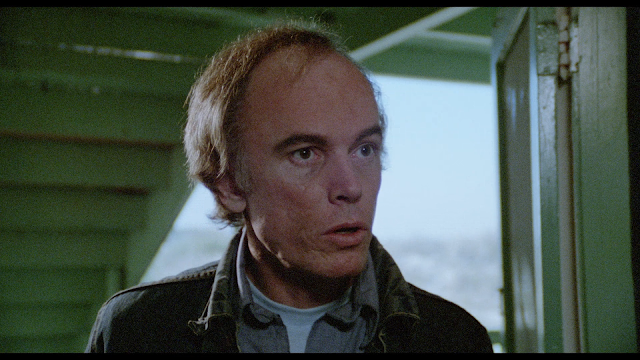 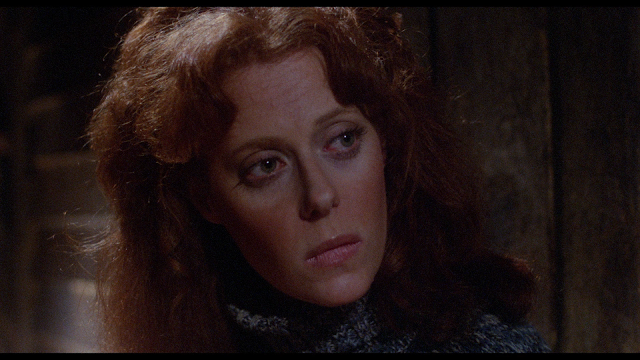 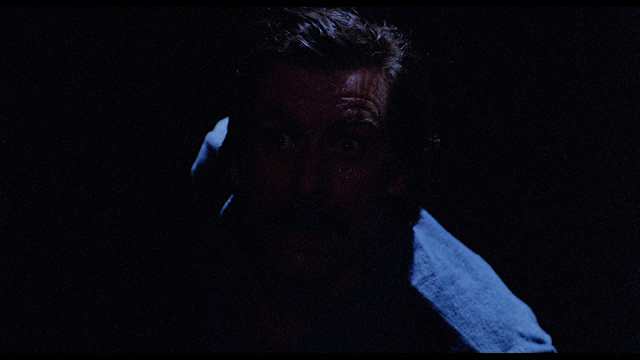 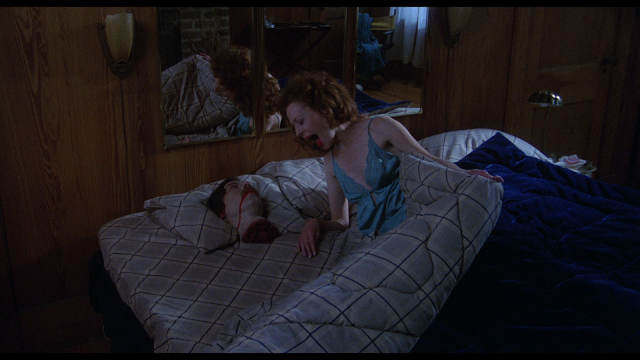 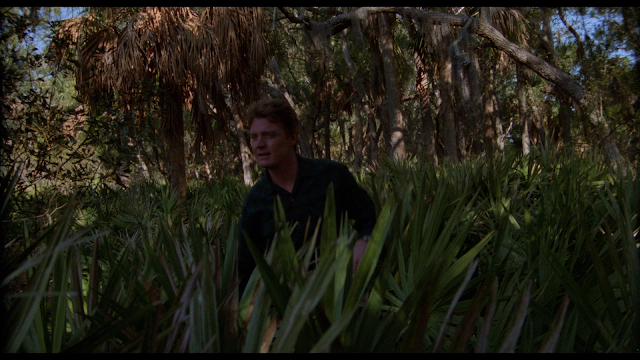 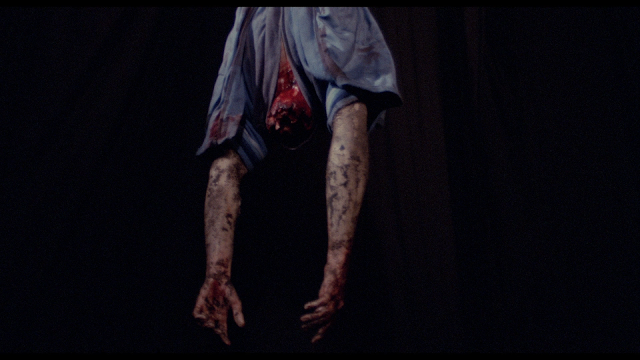 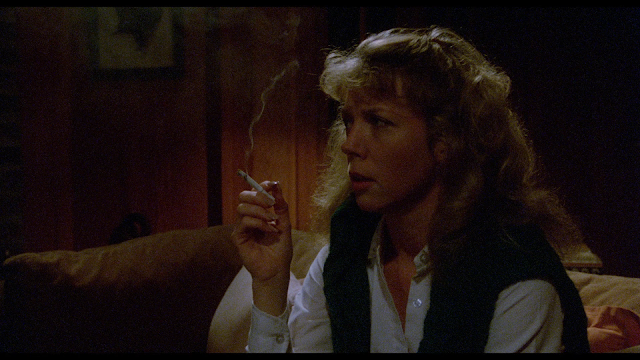 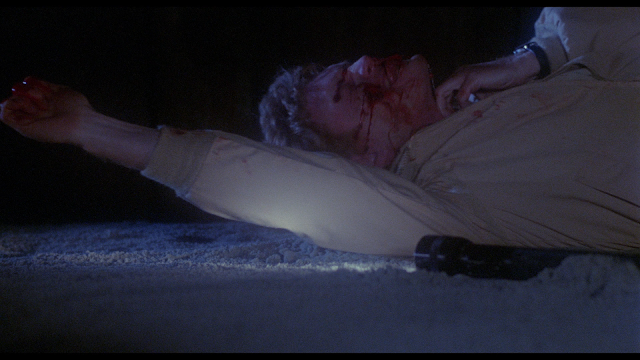 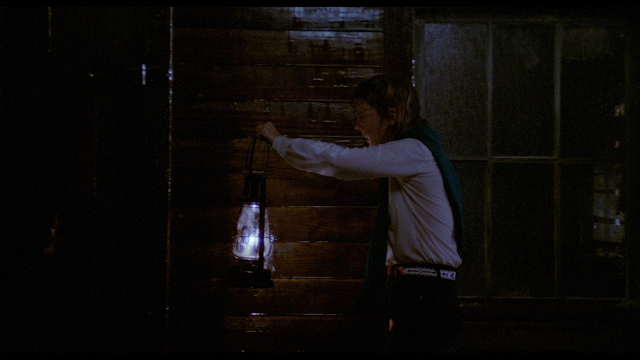 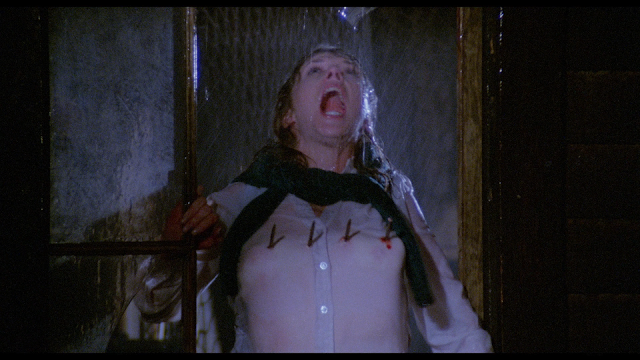 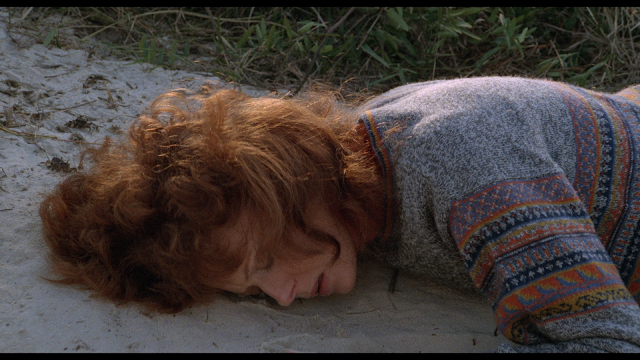 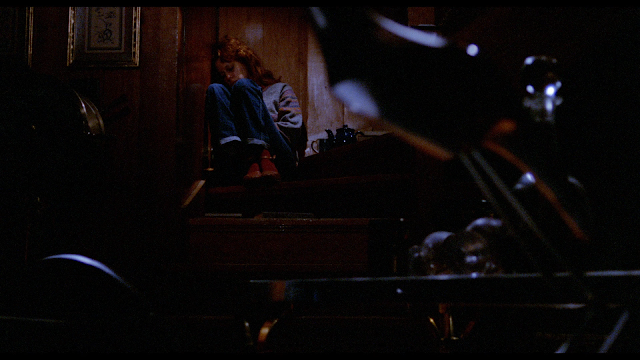 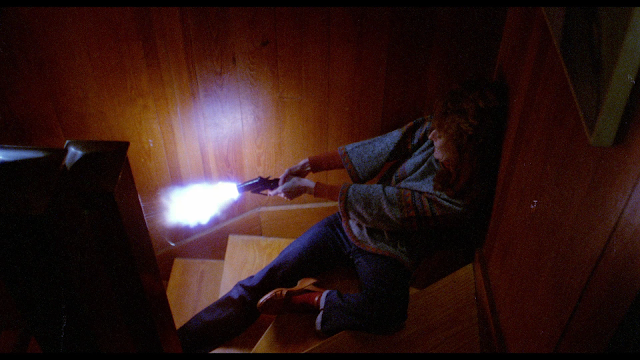 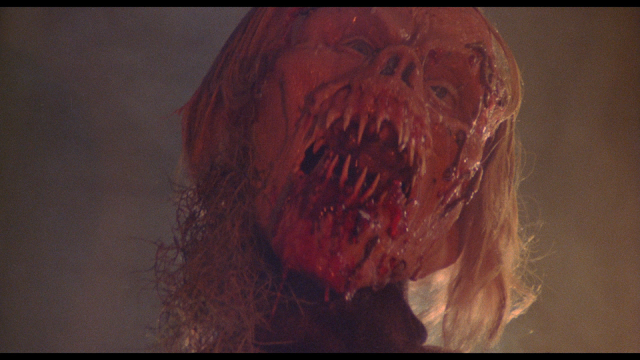