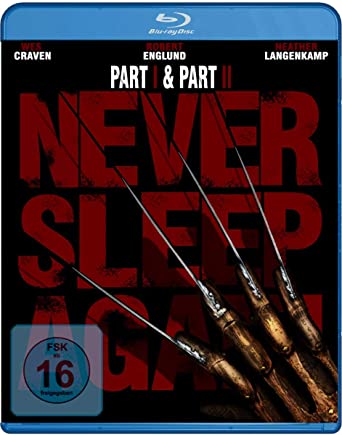 German company Alive has bundled together the A Nightmare on Elm Street documentary, Never Sleep Again, and the Heather Langenkamp doc, I Am Nancy, for one low price. Is it worth importing? Click on through to find out. Ten years ago, NEVER SLEEP AGAIN, a 4-hour documentary that covers the A NIGHTMARE ON ELM STREET series, was released on DVD. Throughout these four hours, we hear stories about the making of all seven mainline NIGHTMARE films, the FREEDY’S NIGHTMARES tv series, and the long-awaited FREDDY VS JASON. We also get interviews with most of the casts for the different films, with the exception of Johnny Depp, Patricia Arquette, and Lawrence Fishburne, and all the directors of the films. This is a real deep dive into the world of A NIGHTMARE ON ELM STREET that covers just about everything you could ever want to know about the NIGHTMARE films.

Of course, the first NIGHTMARE film gets the biggest coverage, but the other films get their time to shine.

Did you know that A NIGHTMARE ON ELM STREET 2: FREDDY’S REVENGE was known as the “GAY NIGHTMARE” film? Yeah, you probably did know that. However, did you ever notice that Jesse really isn’t the hero of the film, but rather the damsel in distress? I didn’t notice that either until it was pointed out. How about the fact that there is an unrated version of A NIGHTMARE ON ELM STREET 5: DREAM CHILD that was only available on VHS and Laserdisc? This version reinstates gore footage that was cut from some of the death scenes.

I love the fact that Wes Craven is on hand to give his take on the different films in the series and never once does he come off as bitter. There are a ton of directors who would have sat down for the interview and came off as dicks, but Craven seems to like some of the films in the series. In fact, all the directors clearly at least like the films that they made, even Rachael Talalay who made the worst film in the whole series.

The nice thing about NEVER SLEEP AGAIN is the fact that it never overstays its welcome. It gives all the films their due and then peaces out just shy of four hours. On the blu-ray, there is an entire section of extended interviews that runs over an hour. These interviews are really good and show that even the cut stuff would have been worth being in the documentary proper.

NEVER SLEEP AGAIN is a wonderful documentary that gives fans of the NIGHTMARE series what they have been asking for: insight into the series from the people who made the films. I would have liked some stuff about the remake, but this film was released right around the time the remake hit theaters, so talking about the film would have been weird to say the least. Still, this is a must own for fans of the NIGHTMARE series or horror films in general. 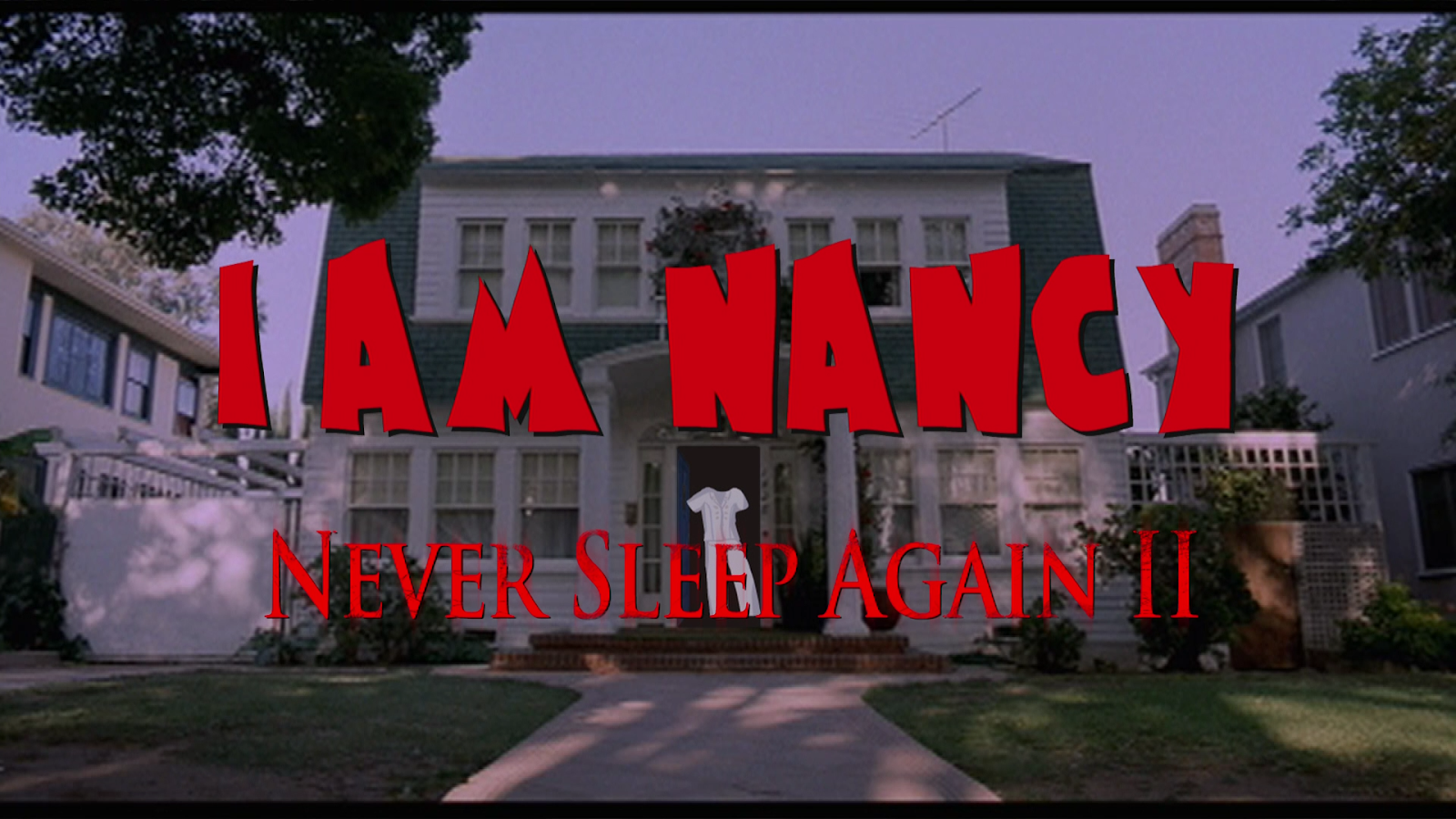 Now, I AM NANCY (or NEVER SLEEP AGAIN II as this release calls it) is not a good film. The film starts off with a very uncomfortable scene with Heather Langenkamp and a guy she knows, as the guy is getting a tattoo of Freddy on his leg. She asks him if he is going to put Nancy into the tattoo and there is this uncomfortable silence that seems to go on forever. The feeling in this scene is indicative of what the whole doc is.

What I thought was going to be a doc about Langenkamp’s life before and after A NIGHTMARE ON ELM STREET actually is about her going to a convention and meeting her fans. The film plays a lot like THE NIGHT SHE CAME HOME, the doc about Jamie Lee Curtis going to one horror convention and making a big deal about it. I thought that doc was pretentious and self-congratulatory, whereas I AM NANCY is a bit sad. It is clear that Langenkamp wants to be loved by everyone who has ever seen a NIGHTMARE film, but she also knows that she never will because she lives in the shadow of Freddy Krueger.

Now, this sounds all well and good, but the doc is not very well made. It feels very standard and offers us nothing about the horror fandom that we haven’t seen or heard before. I think that if the film were about her and her life, we would have gotten to know her more. She really isn’t a known actress outside of the horror crowd, so this doc fails in converting people into fans of hers because we barely know her.

There are scenes where various women talk to her about what Nancy and ELM STREET mean to them. I found this part of the doc touching as there are a number of people who identify with Nancy which makes them feel stronger in real life. This is the only part of the doc that does this and it feels fresh and alive, which is something that you can’t say about the rest of the doc.

The worst thing about the doc is that it is forgettable. NEVER SLEEP AGAIN has an attractiveness to it. There are people there other than Langenkamp and Robert Englund talking about the films. Here, we get those two and it is mostly Langenkamp. I have a feeling that the filmmakers thought that they were going to get more out of Langenkamp and the convention, but it just never happened. The film is worth a watch if you are a NIGHTMARE fan. All others can watch NEVER SLEEP AGAIN, well, again. The blu-ray that I am reviewing is from GERMANY and is locked to REGION B. This set includes both NEVER SLEEP AGAIN and I AM NANCY on their own blu-ray. The picture quality on NEVER SLEEP AGAIN is pretty good. The image appears a bit dark at times, but I think that is how the doc was filmed. There are some banding issues here and there, but they never really get in the way of enjoyment. Skin tones and colors look nice and the clips from the different films look pretty decent too.

I AM NANCY doesn’t fare so well. I have read in other reviews that this presentation is in standard definition, but I don’t think all of it is. Some of the footage looks good, some of it looks terrible. I think that some of it (the testimonials from fans) was shot in standard def, but the main film itself was shot on low-end consumer-grade stuff. This results in the picture looking soft and well, standard def. The disc has the benefit of not having hours of special features on it, but this space is never used for the film. It’s not a bad looking picture per se, but it doesn’t look as good as NEVER SLEEP AGAIN.

Both films come with English DTS-HD Master Audio 2.0 tracks, along with German dubs too but we are not talking about those. Both films sound great with dialogue sounding crisp.

The behind the scenes section contains footage under different headers. This footage runs anywhere from four seconds (yes, four seconds) all the way up to one hour and eighteen minutes. This footage contains some really cool stuff. All of the footage is the “fly on the wall” kind.

We also get a short interview with James Rolfe (the Angry Video Game Nerd), an episode of HORROR’S HALLOWED GROUNDS with Sean Clark, and some more behind the scenes footage. All in all, we are looking at about seven and a half hours of special features. That is a ton of information on a single disc as you have to factor in the four-hour doc with its two lossless audio tracks.

Now, not all of this footage looks the greatest. Most of the behind the scenes footage has severe banding issues that are noticeable any time the camera or anyone movies on camera. The interview footage looks fine as does all of the BTS footage. I love the fact that this footage is on here, but I wish that we could have gotten the deleted scenes for the different films, especially for the first and fifth films. Still, the fact that there is as much footage as we have here is amazing.

So, should you buy this release? Well, if you don’t already have either of the films AND are REGION FREE then yes. I bought it because it had the most value for my dollar without sacrificing picture and audio quality for the main features. If you are not REGION FREE then the choice has already been made for you. This is a pretty good release that nets you two films for under $20.