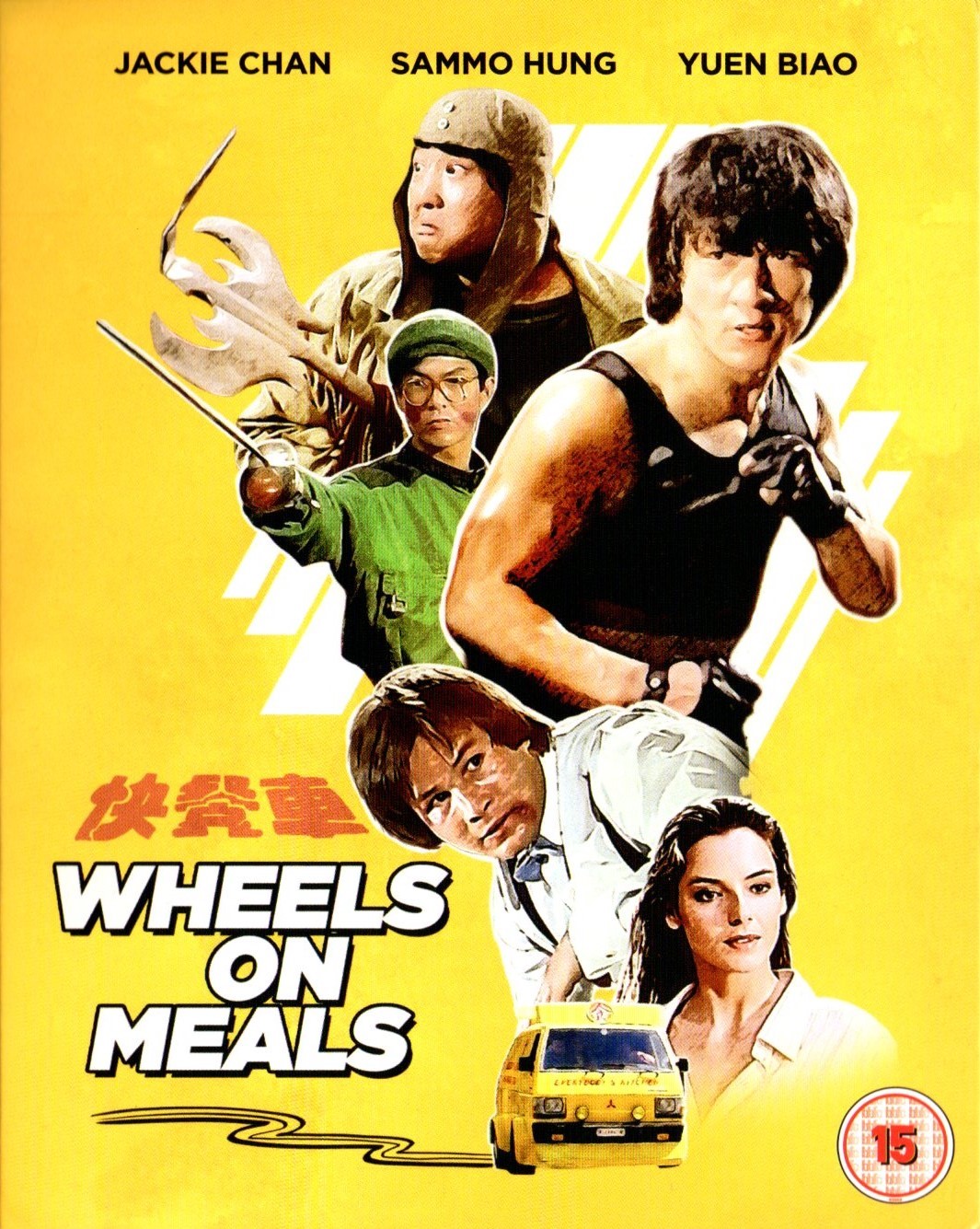 Cousins Thomas and David, owners of a mobile restaurant, team up with their friend Moby, a bumbling private detective, to save the beautiful Sylvia, a pickpocket. Action and humor abound in the streets of Barcelona, culminating with a battle in the castle hideout of the evil gang.


Wheels on Meals is a true classic of the martial arts genre. This is a film that is filled with some great fight scenes, including one of the best of the 80’s, and some truly great chemistry between the three leads. Sammo Hung works triple time here with some great directing, providing some amazing fight choreography, all the while being really funny throughout the film. Jackie Chan is his usual, charming self while moving his body in ways that seem impossible and with a speed that would make most people jealous. Yuen Biao, who is not nearly as well known as he should be, performs many stunts throughout the film, including one where he jumps from a second story window on to the street below that I am still, 35 years after the film was released, amazed by. You throw all of this together, along with a baddie (not the main bad guy but he should have been) in Benny “The Jet Urquidez, who is a truly REAL foe to Chan, and you have one of the best films of 1984 and one of my favorite martial arts films of all time. 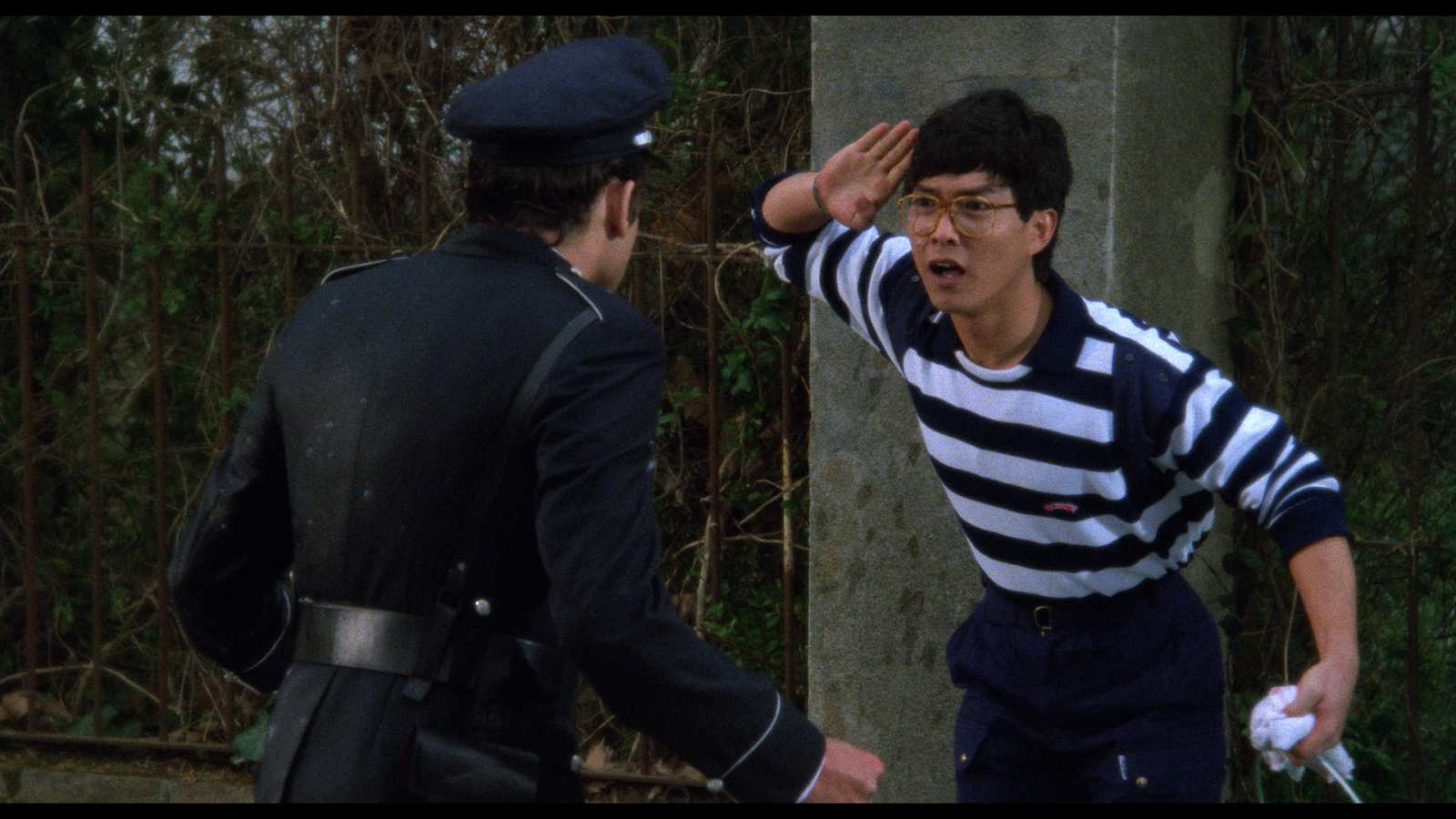 Featuring a brand new 2K restoration, and presented in the film’s original aspect ratio of 1.85:1, Wheels on Meals looks AMAZING. Film grain is intact and leads to an incredibly detailed picture. While watching the film for this review, I never noticed how colorful the film is. Everyone wears something that is bright and cheerful at some point throughout the film and that really shines here. Skin tones look very accurate and this whole transfer just shines. This is one of the best transfers of 2019.

The sound here is special. Throughout the years, Wheels on Meals has had a few different dubs done as well as two different scores. Here we are presented with what I would call as the best of everything. We have the film’s original language presented in its original mono, along with 5.1 versions of the original language as well as a newer one that Fortune Star, the owners of the film, did in 2006. I would stay away from this mix, however, as it is just trash.

We are also given the original English dub that was done around the time of the film’s release, as well as a newer dub that Fortune Star also did, both of these tracks are presented in mono and 5.1.

The biggest surprise, though, is the inclusion of the score that was included with the international version of the film. This is a funkier track that gives the film a much different feel to it. Eureka has included a track that contains the original Cantonese audio and combines it with the alternate score, which is some that Eureka did just for this release. I watched bits of the film with every audio option and have come away with the feeling that the two bests tracks here are the original Cantonese mono as well as the original English dub, also in mono. The Cantonese for purists and the English for those who saw the film first in English as it brings on a wave of nostalgia. Stay away from the 2006 and 5.1 mixes as they are a waste of time. 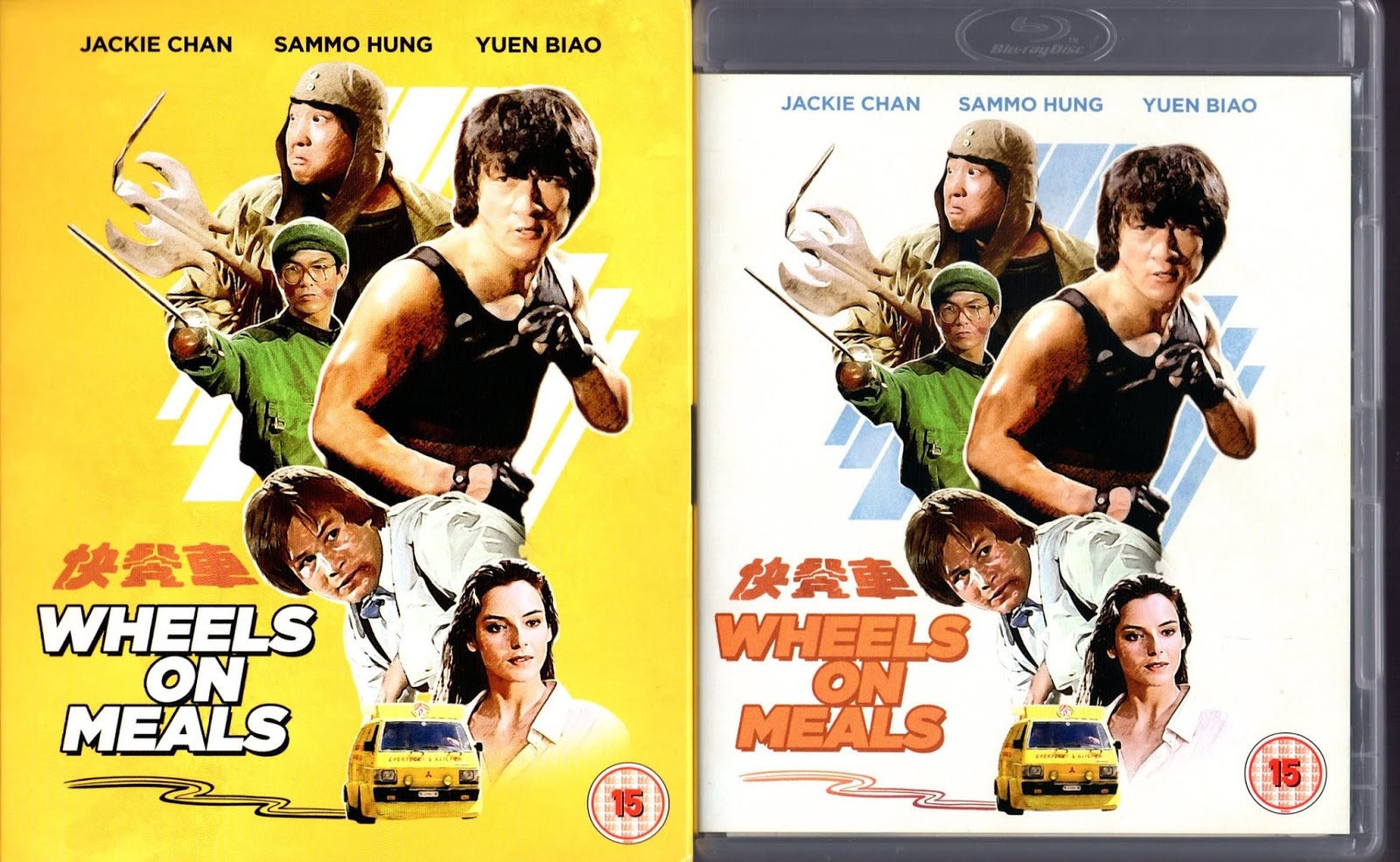 The first thing you will notice about this release is that it comes with a bright yellow slipcover. We don’t get too many of those nowadays, so it a welcome change of pace. 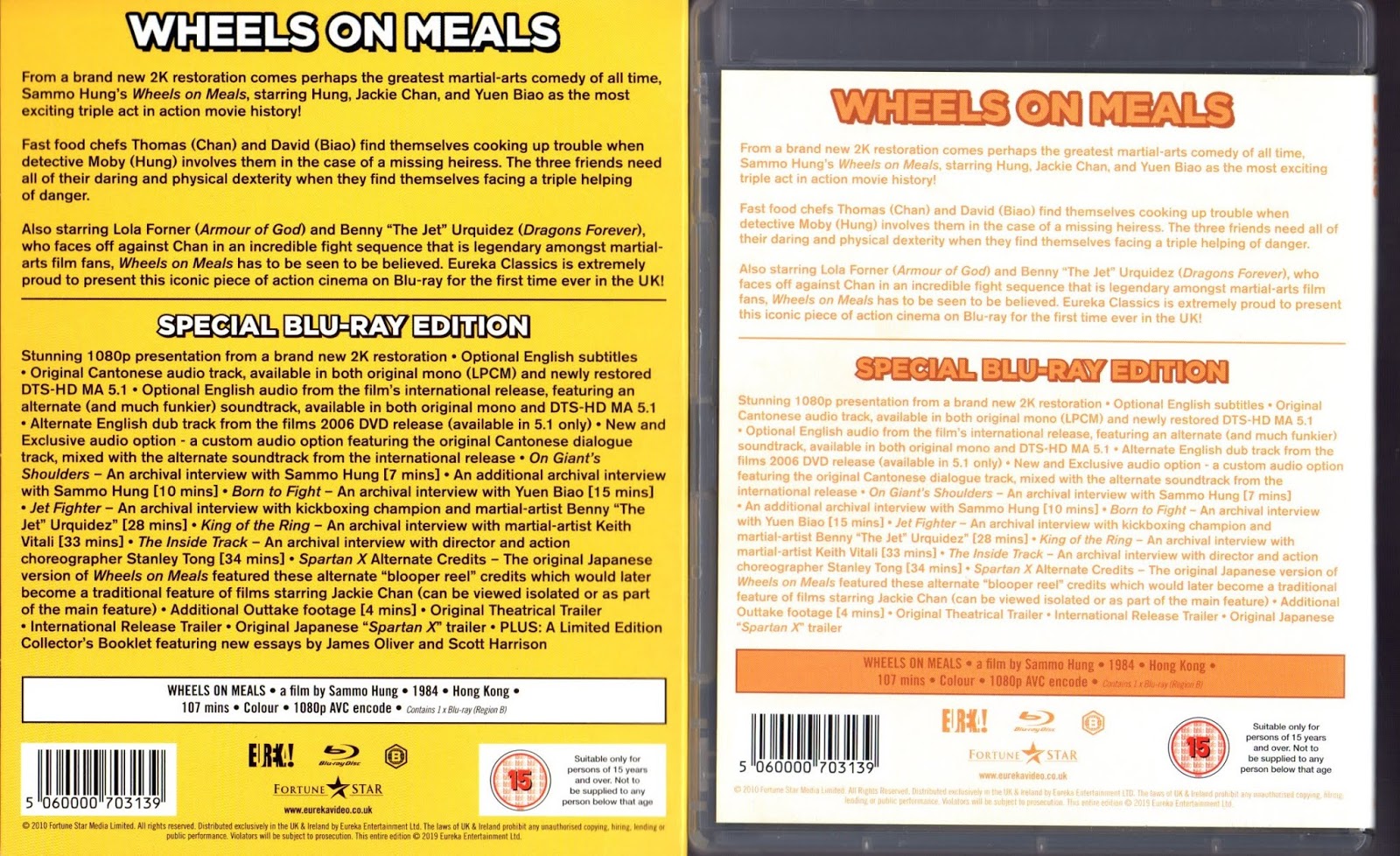 The slipcover and the blu-ray case sleeve share the exact same covers and backs, just in different colors. 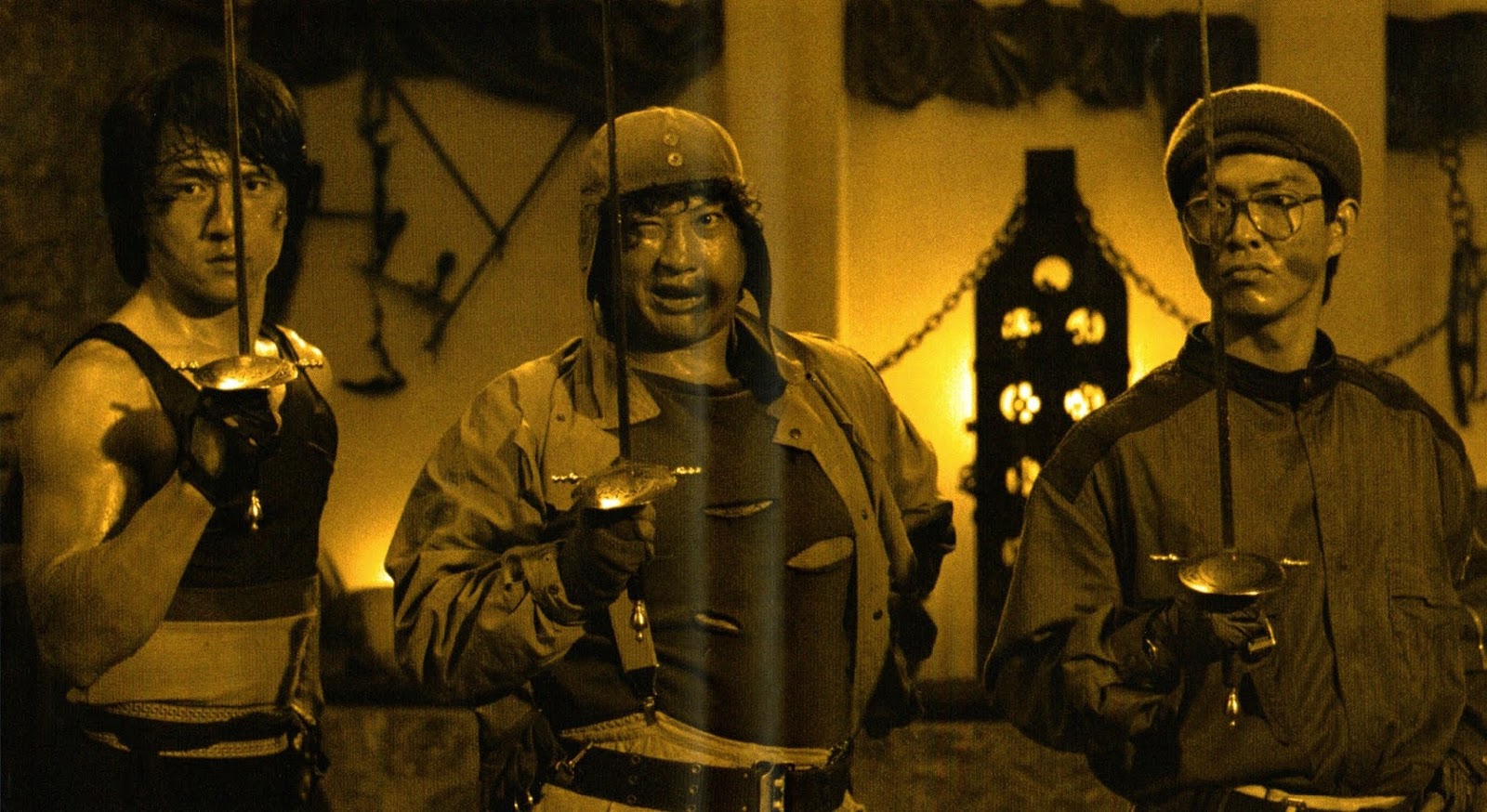 Inside the case, we are treated to some inner art featuring a scene from the film.


We also get a 44-page booklet featuring essays from James Oliver and Scott Harrison. 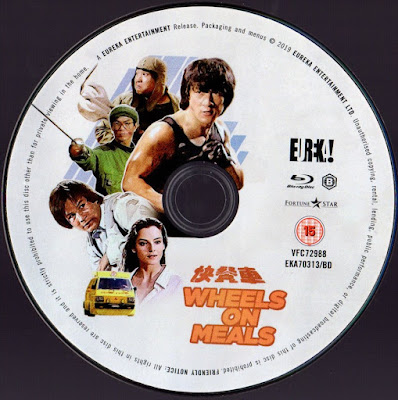 The disc features the same art as the front of the box and is REGION B (locked). 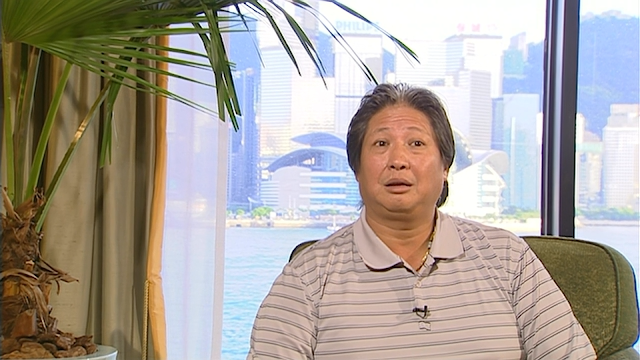 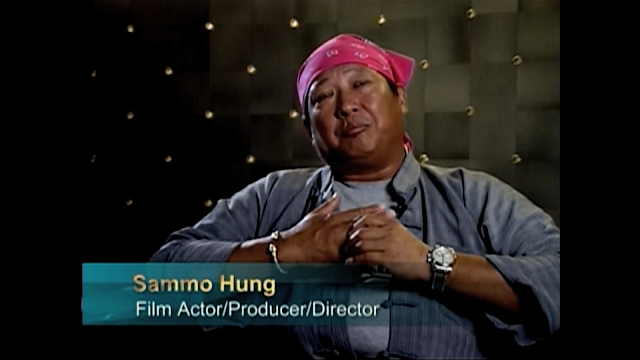 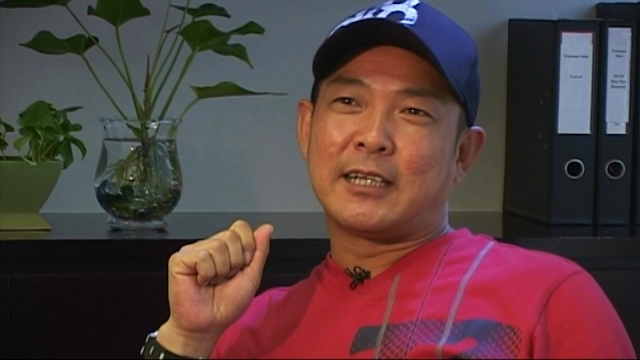 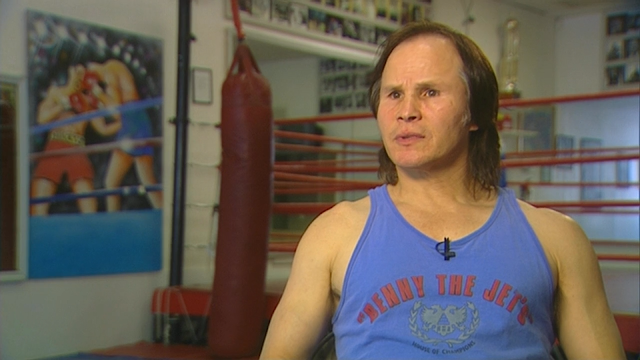 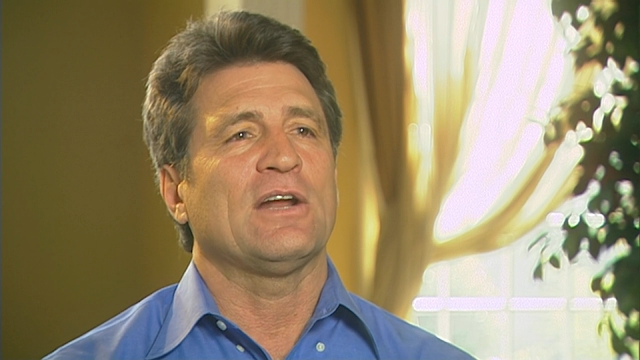 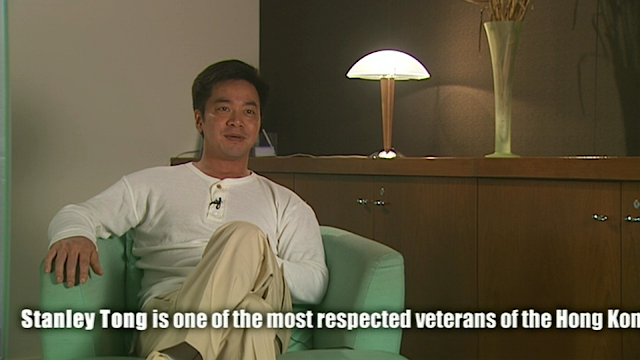 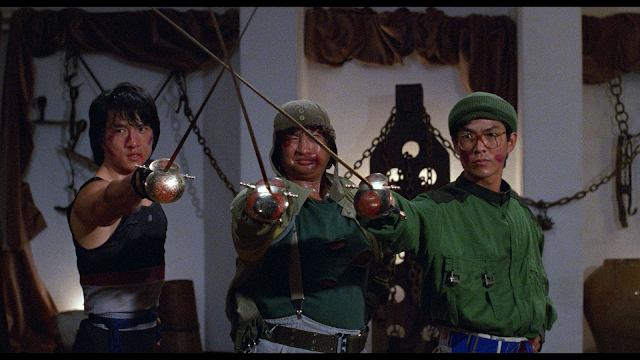 Wheels on Meals is a really fun film that never takes itself too seriously all the while providing us with what we have come to expect from a Jackie Chan/Sammo Hung/Yuen Biao film: a lot of laughs and some amazing fight scenes. This blu-ray is a must-own for fans of the film and those who really want to see a wonderfully fun martial arts film.