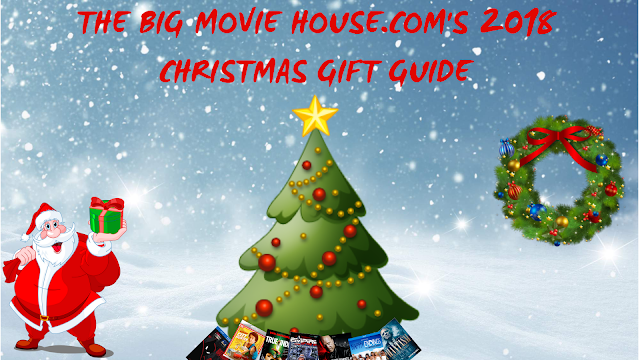 It is that time of year again where we all go crazy trying to find the perfect gift for our family and friends. This year, we at The Big Movie House thought that we would show you some of the best (and our favorites) that blu-ray, DVD, and books have to offer, not just from 2018, but some things that are not from 2018 that you might still want to pick up. 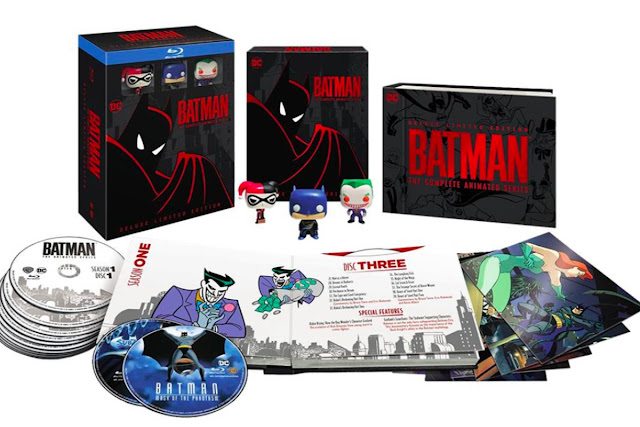 If you grew up in the 90s, then you probably remember Batman: The Animated Series. This was an animated series (duh) that aired on Fox starting in 1992. I still have memories of watching that first episode while eating dinner in front of the TV (the pilot episode aired during prime time on a Sunday night). This series was not what my 12-year-old self had expected. The series was dark and mature and not something that kids would grab a hold of. We did though and the series had a really nice run of 85 episodes then it was retitled The New Batman Adventures and the series finished after that. There were also two films, Batman: Mask of the Phantasm and Batman and Mr. Freeze: Subzero. All of these episodes and films are included in this set, which is just so beautiful. Every episode has been remastered for HD and they look great. The sound is nice too, especially Shirley Walker’s score, which sounds like a big budget film score for every episode. There is also a bonus disc that has a few featurettes that look back on the series and its impact on the youth of the day and the way that cartoons were looked at. This is a must-own for fans of the series and those who just want to see something they haven’t before. 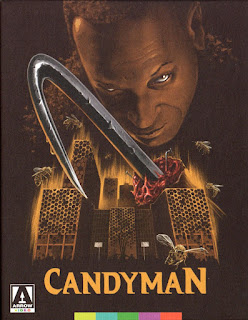 Candyman is such a great film. Here was a slasher film that was dealing with race and not the typical conventions that a slasher film has. The film is scary, seductive, and all around just a great horror film. To me, it is one of the best horror films of the 90s. The blu-ray that Arrow Video released is just so awesome. They went back and did a 4K scan of the original camera negative (the rest of the work was done at the 2K level) and the results are simply stunning. The film has not looked this good since its theatrical release back in 1992. The special features are insightful, entertaining, and worth the time. The packaging is up to Arrow’s usual high standards. This is one of the best blu-rays of 2018 and a great present for your household horror fan. 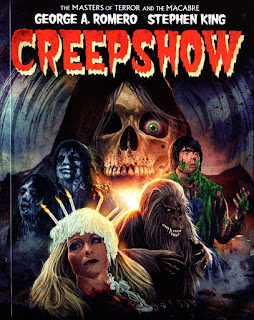 Scream Factory hyped up their Creepshow release so much that there were fears that it wouldn’t be able to live up to the hype. Here was a film that has been treated very poorly in the country it is from and it was Scream Factory’s game to lose. They didn’t and then even upped the ante by including so many interviews and featurettes that it put other releases to shame. And the picture...oh the picture quality. It is so good that you wonder why it took so long for someone to make it look this good. Creepshow belongs in every horror fans collection ad this is the version to get hands down.

The Films of John Carpenter (Memoirs of an Invisible Man, Someone’s Watching Me, In the Mouth of Madness, Starman) (Scream Factory)


(Escape from New York, The Fog, They Live, and Prince of Darkness) (Studiocanal)


2018 was truly the years of John Carpenter as many of his films got either a blu-ray debut or they were getting newly remastered for the first time in a long time. The four films that Scream Factory released are some of the best blu-rays out there. Sure, Carpenter didn’t sit down for any type of involvement for Memoirs or Someone (the latter has a legacy interview from the Warner Bros. DVD), but the films were front and center and they all look gorgeous with brand transfers.

The Studiocanal releases are just stunning. Each film was remastered in 4K and the results are the best we have ever seen for those films. Each film also has a nice documentary from Ballyhoo Films along with all of the legacy features from past releases (mainly the Scream Factory releases). The 4K blu-rays also feature each film’s score done by the man himself. For the Studiocanal releases you will have to be region free, but it is so worth it to have these films at their best. 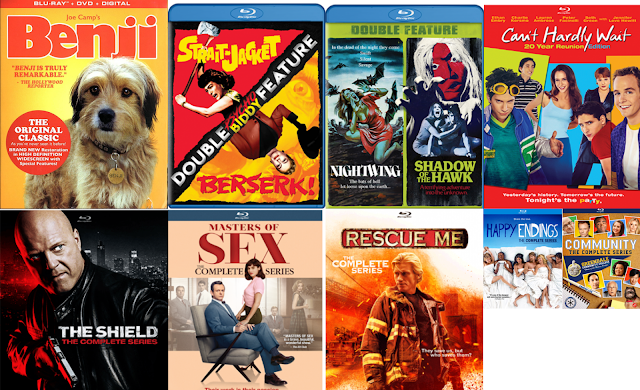 Mill Creek Entertainment had a banner year in 2018 with so many quality releases that it would take me all day to talk about them properly. Benji got a brand new transfer for his 44th birthday. Happy Endings, Rescue Me, Community, and The Shield got long-awaited complete series collections on blu-ray (Masters of Sex was previously available through Sony) and we got blu-ray debuts for a lot more. Each of these releases is worth the little money that Mill Creek actually asks for (the double features can be found for less than $10 and many of the Complete Series TV series can be found for under $100.) that it really isn’t that much to give a film a try.


In the last few years, Fortune Star started to do 2K and 4K remasters of many of the films in their library. This meant that many of these films would see new life after years of being upscales of old DVDs. Eureka Entertainment got the rights to many of these remasters and started to release them on blu-ray. Every one of these releases is breathtaking. The films now look like real films instead of very poor digital representations. The sound is great as well. Eureka also included special features (interviews, commentaries, etc) on each of these releases and the Police Story films featuring multiple different versions from different countries. If you are a martial arts fan or just like action films then you owe it to yourself to get these releases.

I don’t really review too many DVDs because they aren’t at the forefront of the home media business anymore (at least for me and a lot of other collectors). That doesn’t mean that I don’t still own them. I just don’t have as many as I used to. Still, there are some great releases out there that should be looked at for the Christmas holiday.


The American Genre Film Archive and Bleeding Cool released two of the best DVDs in 2018 with Ninja Zombie and The Soultangler. Both of these films are relics of a bygone era of straight to video releases. Both films have a quality to them that makes them more than just micro-budget films. They have more heart and soul than many of the films we get today. Both releases are recommended just for their fun aspects.

Boardinghouse and The Violence Movie Collection (Slasher//Video and MVD Entertainment)


I heard of Boardinghouse through the Hysteria Continues podcast and I knew that I had to see this. I couldn’t find it for rent anywhere so I bought the DVD and boy was I happy. The film itself is a blast to watch and the DVD contains two versions of the film as well as a bunch of special features.


There are countless books that I can recommend for this Christmas like Empire of the B’s: The Mad Movie World of Charles Band and it’s follow-up, It Came From the Aisle!: Inside Charles Band’s Full Moon Entertainment Studio. Both books are great and provide an impressive level of access to Band and his films. 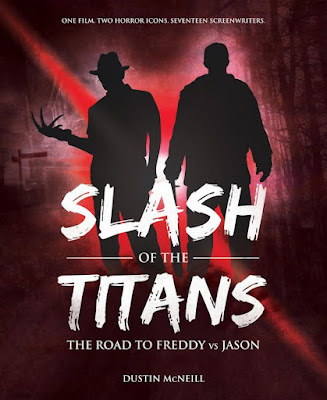 Other books would be Slash of the Titans: The Road to Freddy vs Jason, which looks at the long journey to the horror match-up and all that different scripts that lead there. 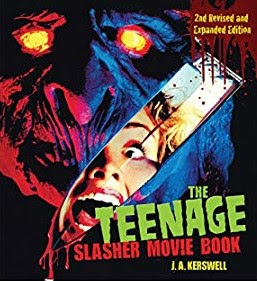 The Teenage Slasher Movie Book (aka Teenage Wasteland) a wonderful look at slasher films from the host of The Hysteria Continues.


Phantasm Exhumed: The Unauthorized Companion which takes an unprecedented look at the making of the first four Phantasm films, and it’s follow-up Further Exhumed: The Strange Case of Phantasm: Ravager. The Complete History of Return of the Living Dead, an in-depth look at the series that introduced “Brains!” to the zombie genre. 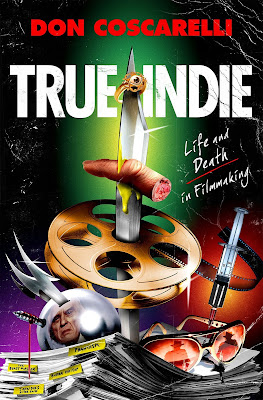 And, True Indie: Life and Death in Filmmaking by Don Coscarelli, who has been making films for over 40 years and is the director of Phantasm 1-4, Beastmaster, Bubba Ho-Tep, and John Dies At the End. This is my favorite book of 2018 as it looks at the very human side of making movies, something that kind of gets lost in the shuffle when it comes to the making of a film. This is a very personal book that will make you laugh and cry.

So there it is. My list of stuff to look out for when buying presents for a film lover that you know. Even if they don’t like the same genre of film that I like or particular films themselves, I am confident that one of these items will put a smile on their face on Christmas morning.