SHORTS!! (Quick Blu-ray Reviews) Vol. 1: Ghosts of Mars, Meatballs, All the Money in the World, and Top Gun 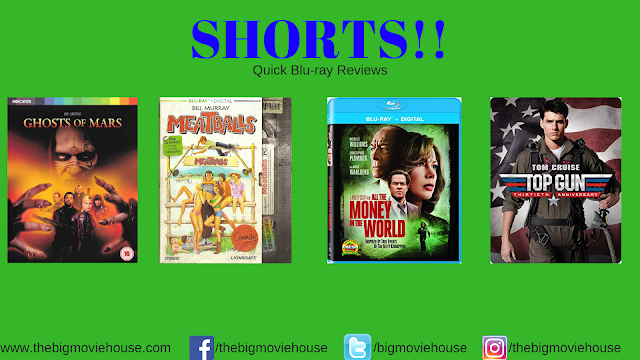 Starting today, I am going to be reviewing some blu-rays through the SHORTS!! moniker. This will get more content to my readers as well as gathering more material for this site. I am still going to be doing the big reviews, but I can't review everything like that (I wish I could). This is the first installment of this that will happen a few times a month. 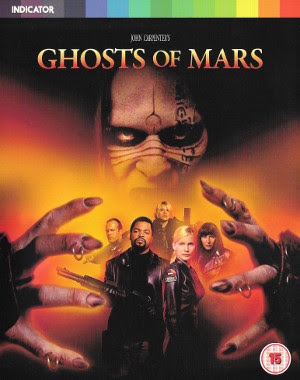 The second to last feature film that John Carpenter would make thus far (I doubt that he will ever make another film again, but I would love to be wrong), Ghosts of Mars came out at a time when Hollywood was obsessed with Mars. From 1996 to 2001, we had no less than seven films that either took place on Mars or were about Martians. The big three were Mission to Mars, Red Planet, and Ghosts of Mars. The film was co-written, directed, and scored by Carpenter and it is a retread of Carpenter’s own Assualt on Precinct 13. This time around hour heroes are held up in a colony on Mars and the assaulters are people who been possessed by the titular ghosts that can take over someone’s body and turn them into a really big fan of S&M and self-mutilation. While Ghosts of Mars is not nearly as bad a people will tell you it is (any Carpenter is better than no Carpenter), the film is not without its faults. The story structure is fairly broken with the whole film being told as a flashback. This robs the film of any suspense as we know who survives and who dies. The other problem with this structure is that there are flashbacks within flashbacks and flashbacks to things that the person telling the story would never have been able to know. The film is fun though and is never boring. I hadn’t seen the film in years and I thought that I was going to hate it, but I had fun even if I was rolling my eyes a lot. Also, I found it funny that Jason Statham acts like a horndog throughout the entire film and his storyline reminded of the storyline for Jay in Dogma.

The blu-ray, from Powerhouse, is pretty good. The picture and sound are both better than expected given that there was no restoration or new scan done. While the film could look better, I thought that we got a nice picture all things considered. The special features are almost all carryovers from the 2001 special edition DVD from Sony and the 2009 blu-ray, also from Sony. The exceptions come in the form of 1994 Q&A with Carpenter, who tells some really good stories to a stiff and humorless interviewer and a still gallery. The packaging is also very nice with the two discs (one blu-ray, one DVD), a booklet with an essay about the film and an interview with Carpenter, and the reversible cover art all package inside of a Criterion-style blu-ray case. 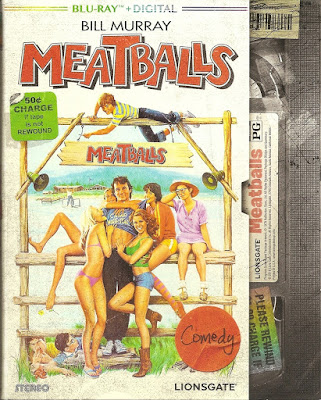 The first leading role for Bill Murray, Meatballs finds Murray as a camp counselor at the ragtag summer camp. The film is filled with the wacky antics that one would expect from both Murray and the summer camp subgenre, but it also has a lot of heart and that gets it a bit of an edge over other summer camp films. The problem that I had with the film was that there weren’t nearly enough hijinks and when they did show up, the timing of the comedy seemed a bit off. Sometimes the punchline would show up sooner than expected or it would take its sweet time showing up. That said, the film is still very funny and Murray is heading towards the top of his game.

The blu-ray, from Lionsgate, is an older blu-ray, but it still isn’t half bad. The picture could use some work, but it stays true to the low budget nature of the film itself. The sound is also good, but nothing that great. The lone special feature here is a commentary track from director Ivan Reitman and co-writer and co-producer Dan Goldberg. The track is a fun and informative listen that will get you to see the film in a slightly different light. I am reviewing this blu-ray because of its part of the re-releases that studios like Warner Brothers, Lionsgate, and Mill Creek have been releasing with brand new slipcovers that are meant to invoke a feeling of nostalgia as they are meant to look like the VHS covers of old. I like this approach to these re-releases and I encourage you to check out your local Walmart or check Amazon, for these this release and others.


All the Money in the World (Sony) 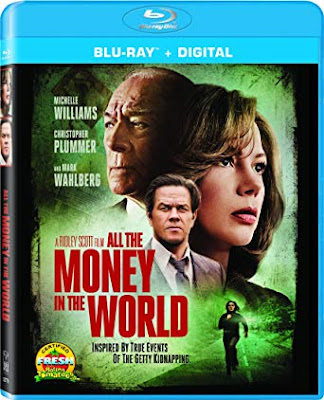 Ridley Scott is 81 years old and is still making films as if he were thirty years younger. His newest film, All the Money in the World, tells the true story of the kidnapping of the grandson of the richest man in the world, J.P. Getty. Getty was a notoriously frugal person who hated spending money except on anything that was human. When his daughter-in-law (played with tons of gusto by Michelle Williams) comes to him for help in getting her son back, Getty sends his security man (played blandly as always by Mark Wahlberg) to negotiate to return of his grandson for as little money as possible. The acting (from everyone except Marky Mark), the direction, and the writing are all on point, but this film takes its time getting to the point. There are plenty of times when scenes could have been cut out completely and it wouldn’t have harmed the film one bit. That being said, the film is still pretty good. Both Williams and Christopher Plummer (who plays J.P. Getty) are in top form and I wish that they had been the two focal points of the film. The addition of Wahlberg doesn’t help the film one bit as Wahlberg seems to be lost in everything that is going on. His character doesn’t seem to inhabit the 70’s but seems like a person from our time who has traveled back in time for this role. I never bought Wahlberg in the role and would have liked to have seen almost anyone else in the role. The actor who plays the kidnapped Getty is also very good in the film. There is a particularly nasty scene where we see the younger Getty wake up during a process that we wouldn’t wish on our worst enemies. I liked the film, but I wish that Scott would have found a different actor than Wahlberg. Some say that an actor can kill a film and Wahlberg does his best, but the film still lives on.

The blu-ray, from Sony, is really nice. Both the picture and sound are top notch as all recent films should be on blu-ray. I found no problems with either. The special features package contains some deleted scenes (none of which are the Kevin Spacey scenes. I would have loved to have seen these scenes just to compare the two performances.), and three featurettes. The best of the featurettes takes a look at the decision to remove Spacey from the film and replace him with Plummer. Scott takes about having to do this in nine days so that the film could meet its release date (which was already locked) and for any awards consideration (which nabbed Plummer an Oscar nomination, amongst other nominations). If you like this film or are a fan of Ridley Scott, then I would recommend this blu-ray. For others, I would consider a rental before buying. 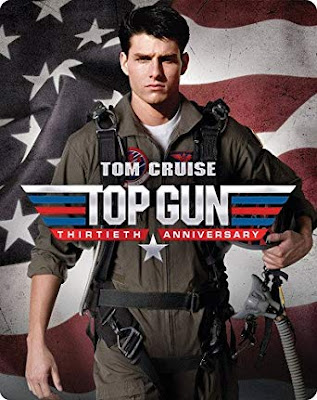 Top Gun is one of the worst films I have ever seen. I know that many find the film funny with all of its homosexual undertones (whether they are supposed to be there are or not is another question) and those who do find it funny do have a fun time, but I am not one of them. The film was released in 1986 at the height of the “bigger is better” thinking of the 80’s. This means that nothing is too big. The planes, the music, and Val Kilmer’s teeth are all there to show off just how big they are. This thinking can work, just look at many of the more beloved action films of the 80’s. Those films had a purpose though. I can’t think of what made people go to see Top Gun. I guess it would be Tom Cruise, but that would only be the first weekend or two. It can’t be the flying scenes because those are boring and incomprehensible. I guess people of the 80’s just like to see things go really fast and blow up big. The thing that gets me the most is the fact that Top Gun is never included on people’s worst of all time lists. The film is just two hours of nothing and by the end, you realize that nothing of consequence has happened. No one really has grown or changed and the characters are at the same place as they were when they started. Tom Cruise was still the same pilot he was at the beginning, Val Kilmer still the same asshole, and the commander is still a tough ass. I really don’t want to hear that Cruise grows as a character because he doesn’t. His position shifts in the film, but the character is exactly the same as before. To call Top Gun a horrible film is doing a disservice to all of the films that rightly get to be called horrible. No. Top Gun sits down at the bottom with the films that I despise. The Room, Birdemic, any film with James Franco or Mark Wahlberg. Yes, Top Gun is that bad. It is a well-made piece of crap that everyone involved should be embarrassed to be associated with.

The blu-ray, from Paramount, is good. The picture quality could be better, but this is an older blu-ray so that can be expected. I am sure that we will get a better blu-ray when the sequel comes out in 2019. The sound is fantastic though. All of the surrounds are used throughout the entire film and it really gets you caught up in the film. The special features are where it is at for this blu-ray. There is a making of that goes into everything about Top Gun and is so much better than the film itself. We also get a bunch of vintage interviews and featurettes and 7 tv spots. (where is the theatrical trailer? We get tv spots, but no trailer?) Everything comes packaged inside of a nice steelbook with terrible cover art.