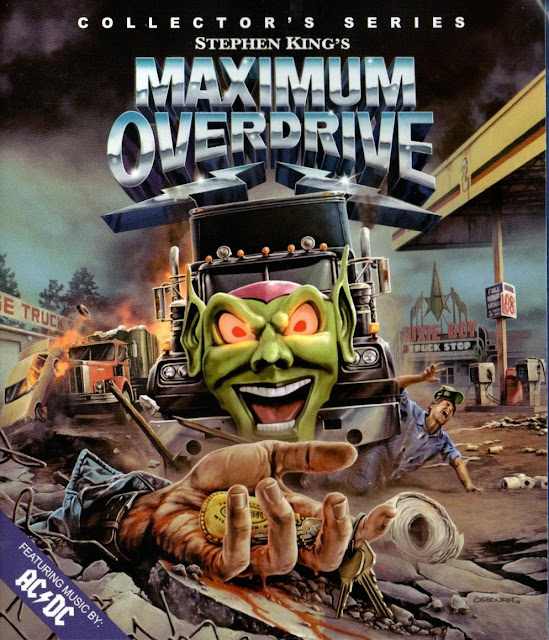 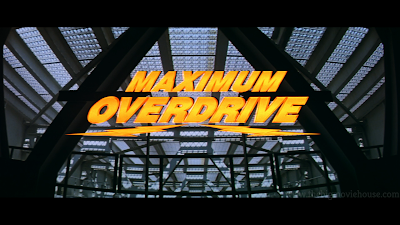 
When the tail of rogue comet Rhea-M passes through Earth's atmosphere, humanity's worst nightmares come to life as machines gradually develop minds of their own, turning on their creators in bloody rebellion. At the Dixie Boy truck stop just outside Wilmington, North Carolina, both workers and patrons alike are coming to grips with the horror as a series of increasingly bizarre accidents occur, some injurious, some near-fatal, and some fatal. The terror finally comes to a head when the parked trucks - led by one for a toy company which sports a demonically-smiling goblin face - each start up on their own, circling the truck stop and preventing anyone from getting in or out. Trapped by the trucks and an emotionless manager (Pat Hingle), a young ex-con (Emilio Estevez) takes it upon himself to lead the rescue of anyone in the immediate vicinity who's life is in danger, and to ultimately escape the truck stop and head to safety. Unfortunately, things become more complicated when a machine-gun-mounted mobile platform orders each of the humans to pump gasoline for the trucks. Pitted against an army of machines demonized by an unknown phenomenon, the people trapped in the Dixie Boy truck stop must use stealth and a concealed arsenal to escape. In the meantime, they realize that there is more to the tail of Rhea-M than they initially thought.


Let’s get this out of the way: Maximum Overdrive is not a good film. While the film doesn’t come anywhere near being one of the worst films ever made, it doesn’t do very much right. The acting is ok, the direction is lazy, and the script (penned by King himself) is just bland. If these things are what's wrong with the film, then what is right about it? Well, the film is fun to watch because we really never know what is going to happen next. The reason I say this is because, during the initial attack from the machines, many kids are killed onscreen, including one who is run over by a steamroller. That’s right. King sets the film up with the murder of a bunch of kids. Once that happens, we are never sure who is going to live and who is going to die. This is a clever way of keeping us on our feet throughout the entire film. The rest of the film is pretty standard and the kills aren’t that memorable, but the film chugs along anyways. King promised that he was going to scare the hell out of us, but he doesn’t. Outside of the sentient trucks, there is nothing here that would remotely be considered a scare. This is more of an action/siege film. There is nothing wrong with that, but don’t confuse the audience when advertising the film. If there is one thing to take away from Maximum Overdrive it is that King can’t even do King very well. 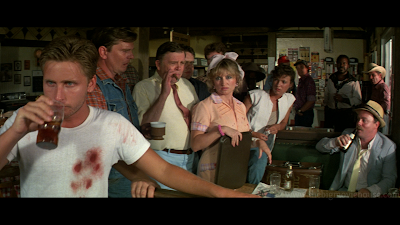 Maximum Overdrive makes its debut on blu-ray with this Vestron Video release and it is pretty decent. The problem with these Vestron Video releases is that the people behind doing the transfer don’t seem to care about the way the film looks. A quick glance will tell you that the film looks ok, but when you really sit down with it, you will find that it looks worse than you would think but not as bad as you fear. Detail is decent enough but if Vestorn had left the film grain alone, we would have better detail. Colors seem to be accurate, but the film was shot with a softness to it so the colors might be a bit faded. While I said that the film grain is almost non-existent, there appears to be no scrubbing of detail to the point where it damages the overall look of the film. This is a pretty digital transfer that never reminded of watching film. It gets the job done for most, but for the rest, the transfer could have been so much better.

The sound is not much better. We are given two to experience the film in: the film’s original 2.0 stereo mix or a 5.1 mix.  Both options are lossless and I chose the 2.0 mix because that is how the filmmakers wanted to film to be seen. Dialogue is good with a few lines here and there getting lost in the shuffle while the AC/DC soundtrack gets it even worse. The track just feels limp and could have used an overhaul.

Maximum Overdrive comes to courtesy of Lionsgate as part of their Vestron Video Collector’s Series.

The slipcover and case art are the same, with commissioned artwork that is really nice. It captures a mood the film never has but it is still worth owning. 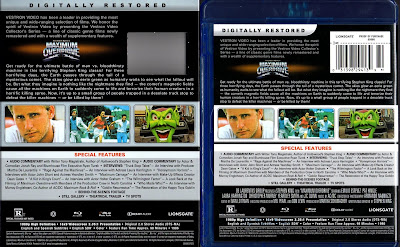 There is no reverse art like so many other studios have been doing lately. Lionsgate wants to charge an arm and a leg because they want in on that sweet boutique label money, but they don’t even bother to include the film’s original poster art. It would cost much more to do so, but this is Lionsgate we are talking about here. They don’t care about this stuff anymore. Honestly, I was surprised that they continue this series. 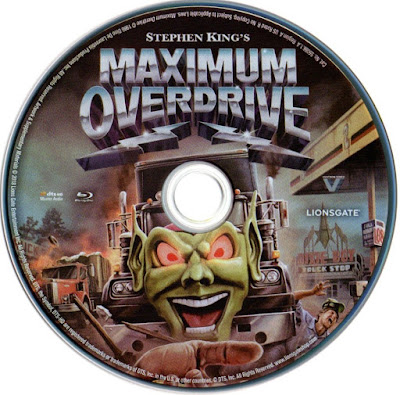 The disc art is the same as the covers so we know that Lionsgate got their money’s worth. 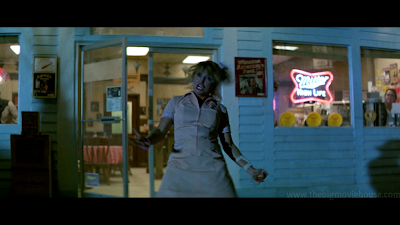 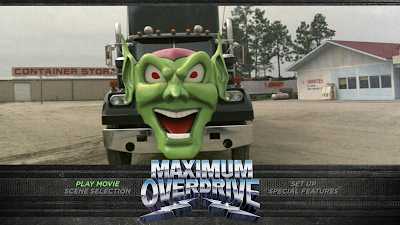 The Wilmington Effect (29m 32s, HD) Interviews with various Wilmington artist who worked on the film and then went on to become part of the North Carolina film scene.

Who Made Who? (6m 32s, HD) AC/DC meets Maximum Overdrive. How the band and the film became one for a while.

Goblin Resurrectus (9m 49s, HD) Interview with Tim Shockey, who owns the Goblin head seen in the film and his efforts to restore it. 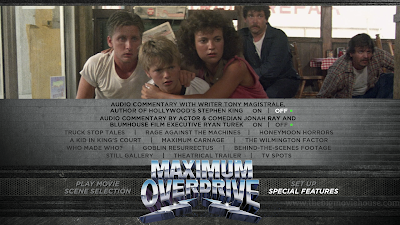 The interviews pretty informative and well paced and edited. The two commentary tracks are the big sell here. The first track, with Tony Magistrale, is good, but the one with Jonah Ray and Ryan Turek is the one to listen to. Both men know everything there is to know about the film and have a good report with each other. They crack on the film and that is fine by me, but I can see how some would be turned off by that. I do wish that King could have provided some type of interview or even an intro to the blu-ray. Also, Emilio Estevez is missing here as well. The last thing that should have been on this disc is a deleted scenes package. Hell, it could have been a montage of deleted footage. It just seems like a huge missed opportunity. I know that the producers couldn’t find the director’s cut, but these scenes are never really mentioned in any of the special features. 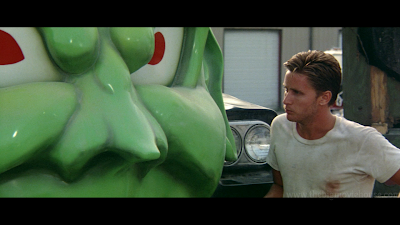 Maximum Overdrive is a silly film that should have been bigger but you can see why it wasn’t. The film isn’t very good but is enjoyable nonetheless. After watching the film, I wondered why King had never directed another film. His answer came in the form of a quote from an interview “Have you seen Maximum Overdrive?” Now I understand why. 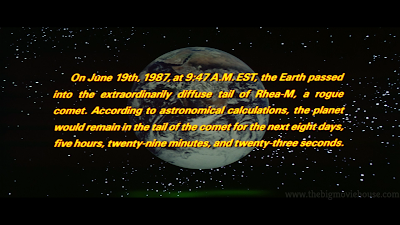 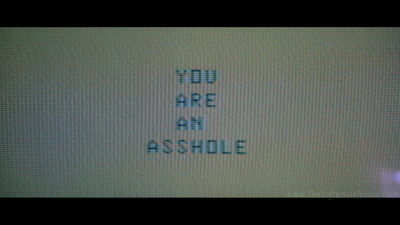 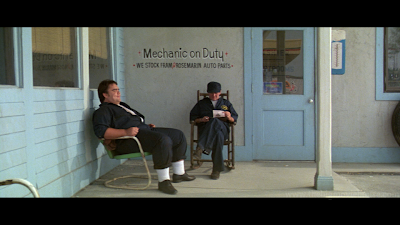 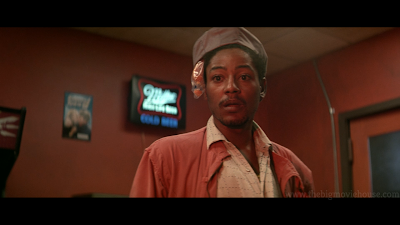 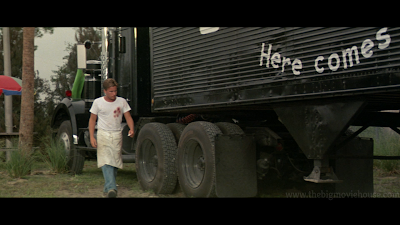 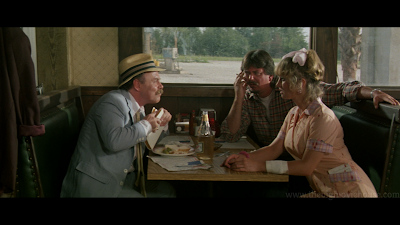 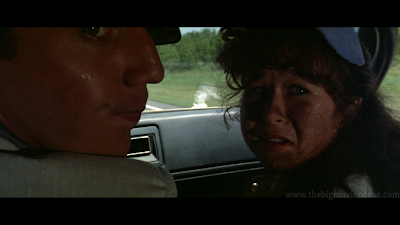 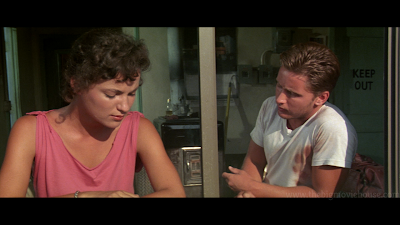 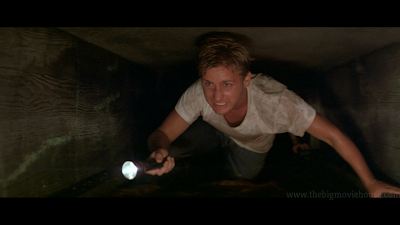 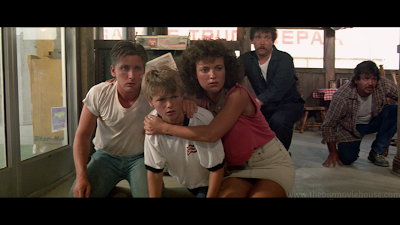 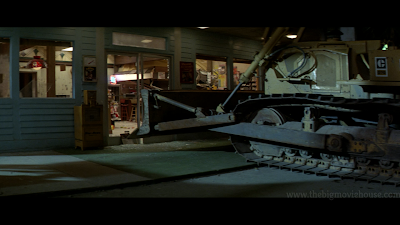 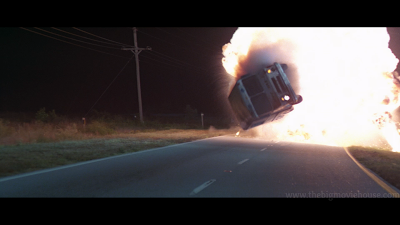 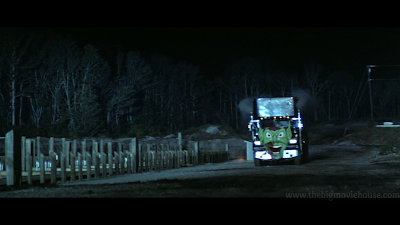