In this first entry of The Video Store Days, I take a trip down memory lane to talk about what the first R-rated horror film I ever saw was and how that film became my first.


I am a child of the 80’s but was raised in the 90’s. I know that probably doesn’t make too much sense, but let me break it down for you: I was born five days before the first FRIDAY THE 13TH was released but didn’t come into my own until the 90’s. For the first ten years of my life, I watched what my parents watched. This meant that I watched a lot of Disney movies, afternoon cartoons like HE-MAN AND THE MASTERS OF THE UNIVERSE and TRANSFORMERS, and whatever was playing on tv during primetime. There was nothing wrong with any of this stuff as I was raised right. I respected my elders, worked hard at school and at home, and treated everyone the way that I wanted to be treated. I was a good kid who had a sanitized world around him.

The 90’s is where I got to know the world around me in ways that I didn’t as a child. Once I hit junior high, things changed. The kids were talking about all types of movies that they have been able to see despite being underage. Horror movies were the talk of the town and I knew that I needed to start watching them. I had seen the staples of family horror entertainment like Gremlins, Ghostbusters, and The Monster Squad, but I had seen bits and pieces of horror movies that my parents watched. I knew who the iconic slashers were and was around during the rise of Freddy and Jason in the pubic eye. I remember when both icons were all over the place in the 80’s and early 90’s. Hell, Jason appeared on The Arsenio Hall Show and I remember watching that with my mother.

My quest for horror movies was during The Video Store Days, the time in which everyone went to a special store to rent their movies. Nowadays, they are mostly gone, but during the 80’s and the 90’s they were everywhere. At the height of The Video Store Days, I belonged to more than fifteen video stores. Some were a decent drive away, but it was all worth it in the end. My search for horror movies brought me to my local video store, R&R video, which had a really nice horror section. 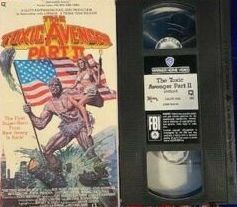 I didn’t really know what to grab. I knew Freddy, Jason, and the other slasher icons, but I wanted to watch something that others hadn’t seen. I wanted to be the only one who watched this as I wanted to stand out from the crowd. I locked eyes on THE TOXIC AVENGER PART II. The VHS box had beautiful artwork featuring our beloved hero holding the American flag in one hand and a buxom bikini-clad babe, holding a machine gun, atop his other shoulder. It was also adorned with the Warner Bros. logo as the VHS was released by said company. To me, this meant that this film was special as it was released by one of the biggest studios in the world (oh how naive I was). I told my mother that I had found a movie, and after some light arguing, she let me rent the film. 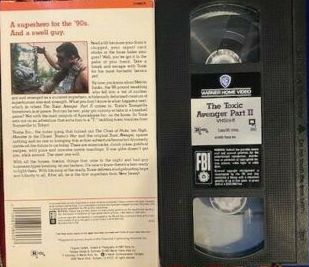 When we got back to the house, I popped the film into the VCR and was horrified and delighted by
what I saw. This was unlike any other film I had ever seen. It was a horror film in a very loose sense as it played out more like a comedy. This delighted me as I thought the film was hilarious. I loved the imagination the film had and the gore wasn’t disgusting, but funny. I loved the film and knew that I needed to keep a lookout for anything else that Troma did.

When I returned to school the following Monday, I told everyone about this film. I did a show and tell where I brought in the VHS box to show to the class (my mother knew the owner and asked him if I could borrow the box for the day.) My teacher was not very happy about my find but didn’t fight me on showing it. He was just happy that I found something that made me happy. (I suffered from depression from a very young age, but that was during a time when depression was a really bad word that got you ostracized by almost everyone in your life.) I talked THE TOXIC AVENGER PART II up so much that my mother was getting calls from angry parents who were hoodwinked by the kids into renting the film only to find out later that the film was really violent, gory, and contained nudity. The violence wasn’t what the parents were mad about, but the nudity. Man, parents HATE nudity. My mother really didn’t care that others were getting in trouble because she knew that I found a new passion: Film.

Next time I will talk about Full Moon and my discovery of this wonderful company.
80s editorial Nostalgia R&R Video Toxic Avenger Troma Video Store Days