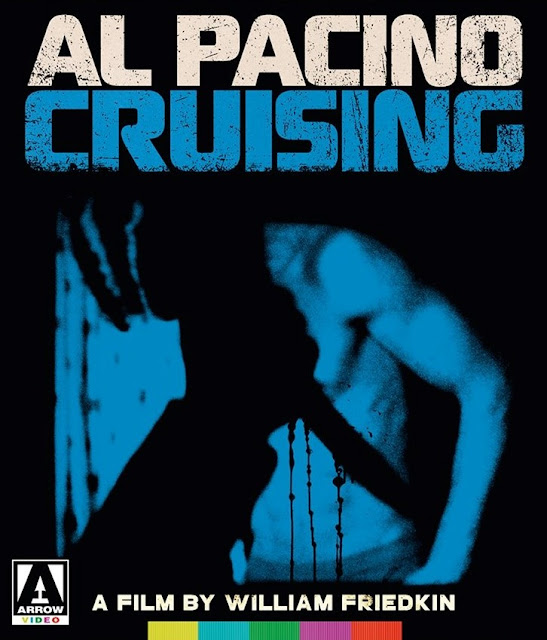 Stuart Richards: How big are ya? 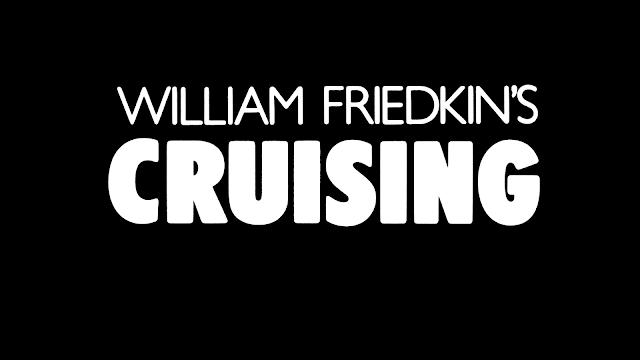 Severed male body parts have been found around New York City. These discoveries happen concurrently with a few gay men, they are involved in the subculture of leather S&M, being murdered, their arms and legs bound behind their naked bodies, and multiple three-inch deep knife wounds in their backs. The police believe the two sets of incidents are related. Lead investigator Captain Edelson offers the job of going undercover into the leather S&M gay subculture to find the murderer to police constable Steve Burns, who matches the physical type of the victims. Despite being straight, he accepts the job as he aspires to be a detective, but he is told he can't tell anyone, even his girlfriend Nancy, of his undercover work. Steve goes through a steep learning curve about this gay subculture as he tracks suspects. As he goes through this undercover work, he has to decide how far he will go to achieve success. But he also is highly affected not only by what he sees in this subculture but by the police's reaction to events that are happening around him. This may affect his ability not only to carry out the job but in his personal relationship to Nancy.


Cruising has always been an elusive film to find. I missed out on the 2007 dvd as I was kind of broke at the time and I refused to pay scalper’s prices after the dvd went out of print. So I was really happy when this blu-ray, from Arrow Video, showed up in my mailbox.  I was finally going to be able to see the last film I needed to see from William Friedkin.

The film as a whole isn’t too bad. It is a detective story where the detective spends a lot of time not detecting anything. This gives us a chance to get to know the world that Friedkin was plunging this character into. Friedkin does an admiral job of directing all of this world building, but I felt that the film was lacking in a lot of areas. 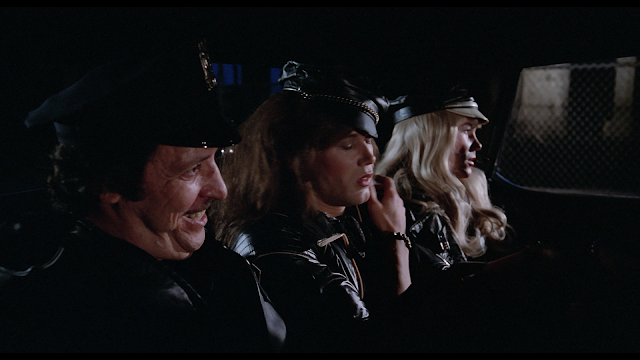 The film moves at a snail’s pace, giving us time to spend in this world by sacrificing most of the characters in the process. The Karen Allen character is nothing more than a fuck buddy and thought she was completely wasted. The Paul Sorvino character is to have supposed to have seen the worst in the world, this is the reason for the almost monotone performance, but I just felt that Sorvino signed on to a film that he ultimately didn’t want to be in so he gave the laziest performance of the film. His character seemed to be rather bored by life and thus didn’t care about anything.

Then we get to Al Pacino. Pacino has given some amazing performances over the years. The Godfather series, Dog Day Afternoon, Heat. These are all great performances. He has also given some really shitty performances over the years too. Jack and Jill, Gigli, and now Cruising. As I was watching the film, I wondered if Pacino was high while making the film. I couldn’t find any proof that he was, but he seems to be. He kind of just floats in and out of scenes and has an almost Alzheimer's way about himself here. The way he walks back and forth and then does the exact same thing like he is lost. It’s really weird and it kind of took me out of the film. I understand that his character is supposed to be losing his mind as he gets deeper and deeper into the leather bar lifestyle, but there are so many better ways to show this other than acting like a deer in headlights.

When the film was released, and even while it was being shot, it drew a lot of controversy from the gay community. I kind of get it. Being gay back then meant that you had to keep you lifestyle a secret or else you could lose a lot of things that mean the world to you. This also meant that there wasn’t a lot of representation in film and tv. This film, however, I don’t really get why it was controversial. Sure, the stuff that happens in the leather bars (which was very real) doesn’t represent the gay community as a whole. This is just a small part of the community, but back when the film came out, I could see people thinking that this is what all gay people did when they weren’t working. I just think that it is an interesting back drop for a murder mystery. Of course, this is coming from a straight man who first saw the film in 2019, but this is my opinion nonetheless. 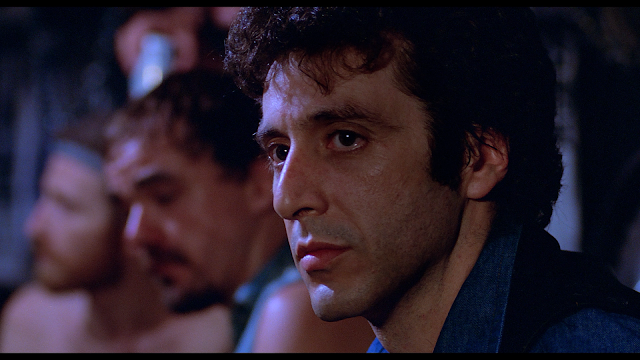 One other thing before I close up this review and what is the main crux I have with the film. I found the film to be utterly pointless when it came to the end. Friedkin toys with the audience a bit too much for my tastes. He makes the killer different in every scene the killer is in so that the audience can’t tell who it is supposed to be, but we can tell who it is supposed to be because the few red herrings presented here are not really anything like the killer. He also gives the killer a very distinctive voice that is then given to another character later in the film. Then Friedkin has the audacity to cop out at the end and say that the killer is still out there even though he gave the number suspect the killer’s voice. There is so much trickery going on that I felt that I was being toyed with, and not in a good way. I don’t mind the smaller tricks that filmmakers play to hide the identity of a film’s killer, but the lengths that Friedkin goes, and then doesn’t stick to any of them, is bullshit. That’s right, I am calling Friedkin out on his bullshit. A twist and turn in a film is fine, but when you just flat out lie to the audience and then lie about the lie to no end is just deceitful. I can understand him saying that the killer is still out there, but all of the trickery before it means nothing when you cop to that ending.

Also, Pacino killed that guy at the end? Are you kidding me? Sure, Pacino has one outburst of anger at the guy’s boyfriend, but Pacino liked the guy he supposedly killed. What was the point of having Pacino kill the guy other than having a shocker of an ending? It would have made more sense if Pacino killed the guy’s boyfriend. You know, the one that Pacino was mad at. Also, this is the only time that Pacino gets mad so it is a real stretch to say that Pacino all of a sudden had a killer’s anger. And, how did Sorvino not know where Pacino was living as the undercover? He is shocked to hear that Pacino lived next door to the dead guy. I don’t know. The film is all over the place in these regards and I can’t recommend the film outside of a curiosity. It’s not a good film, but it is an interesting one. 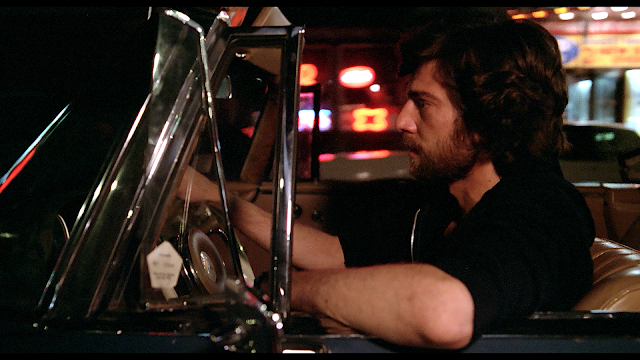 Featuring a brand new 4K restoration and presented in the film’s original aspect ratio of 1.85:1, Cruising looks really good. Detail is very high with close-ups looking amazing. Blacks are nice and inky and colors pop at times, but only when they are supposed to. There is some film grain here and it can get a bit heavy on during dark scenes, but I love film grain so this was no problem for me. Gone is the blue filter that was found on the 2007 dvd release.

There are two tracks found here: a stereo mix and a 5.1 mix. I watched the film with the 2.0 mix as this was what the film would have sounded like in its original run and it sounds good. Dialogue is clear and the film’s score sounds great.

I was sent a review copy of the film and can not comment on the packaging. I can tell you that there is a matted slipcover, booklet, and reversible cover. 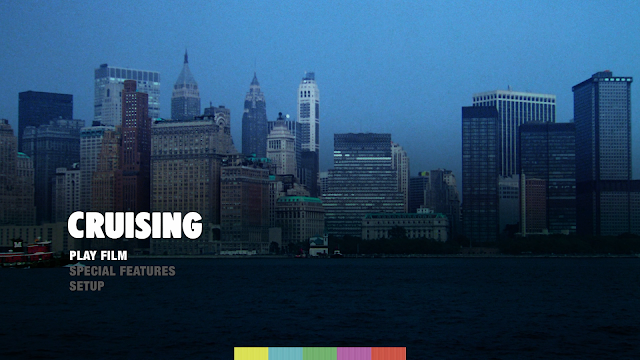 
History of Cruising (21m 5s, SD) Produced for the film’s 2007 dvd from Warner Brothers, this featurette looks at the genesis of the project, from Friedkin turning the chance to direct the film multiple times to the casting and writing of the film. There are a lot of people here who worked on the film, but sadly no Pacino, Karen Allen, or Paul Sorvino.


Exorcising Cruising (22m 31s, SD) Also produced for the film’s 2007 dvd release, this featurette looks at the film’s troubled production which included daily protests, protestors trying the ruin filming by being loud (this is why most of the film is dubbed) and shining lights and whatnot on a scene. Some members of the gay community were mad at the film for being about the seedy side of the community while there are not very many films, at the time, that painted the community in a positive light. Editing, sound design, and the film’s ending are also covered. 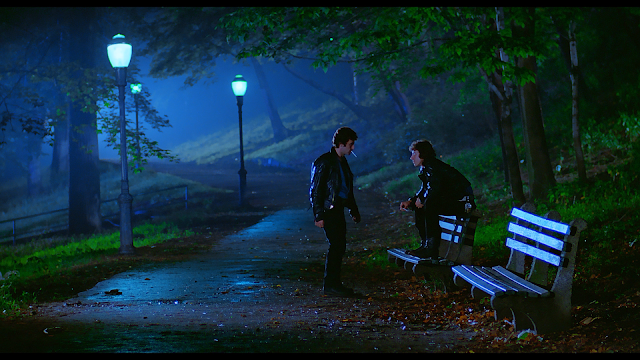 Cruising is a curiosity piece and nothing more. The film continually fucks with you until the end when it reveals that everything you think you know is a lie, but is it? Fuck that. Outside of the controversy there really isn't much here other than a poorly told story with some awful acting choices. The blu-ray that Arrow has put together is really good though. The picture and the sound are great and the special features cover just about everything you need to know about the film.