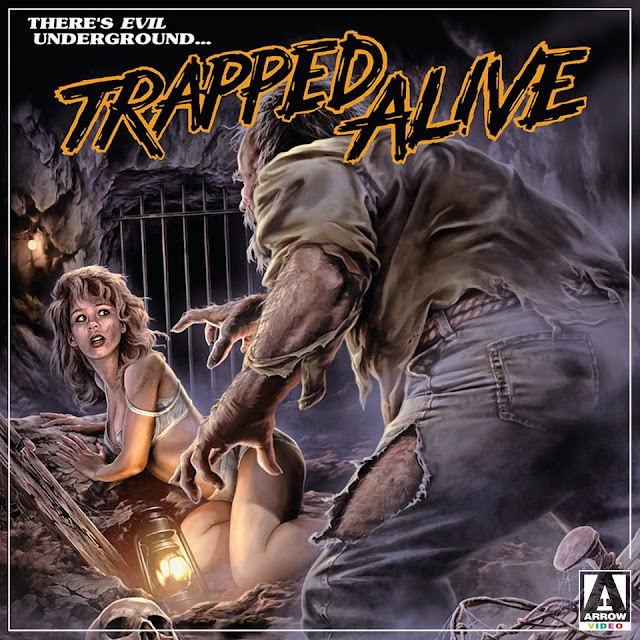 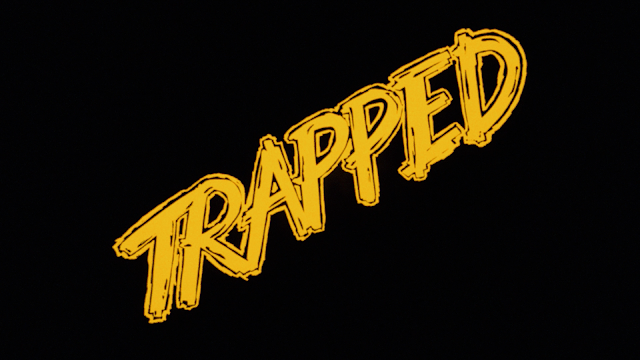 A sheriff's deputy, some escaped prisoners, and two young girls find themselves trapped in a mine shaft where a cannibalistic mutant is hunting them for food.


Trapped Alive is a film that wants to be more than it is. The film starts out well enough, with an appearance from Cameron Mitchell (who does his best acting to a picture) as well as some decent character building. The convicts and the girls are not the greatest characters in the world, but for a kind of slasher film, they do alright. It is when the characters get trapped in the mine that film just falls apart.

First, the characters don’t do too much to try to get out of the mine. They do a little bit, but they seem to accept their fate of being stuck down there instead of really trying to get out. The prisoner characters, at least the leader (of sorts), has other things on their minds with them being trapped in the mine with two pretty girls. Of course one of them is almost raped (kind of. The lead prisoner makes her dance for him, which leads to him wanting her to strip, which will lead to the rape. You get the picture.) I just don’t understand why almost every film I see where the bad guy really wants to establish that he is a REALLY bad guy, it always has to be rape. Isn’t killing someone enough? 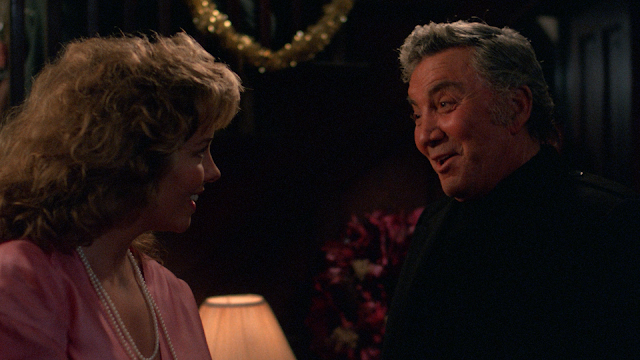 So these characters are stuck in this mine and then a hook shows up from the ceiling (?) and one of the prisoners is hooked and then lifted in the heavens of the mine VERY SLOWLY. I don’t think that I have ever seen something move in a film that slowly ever. The slow motion that Michael Bay and Zack Snyder like to use in every one of their films moves faster than this slow ass hook. And what do the other characters do? Well, they stand there and watch this prisoner ascend the mine. The prisoner is screaming for dear life and everyone else just stands there and watches. These ladies and gentlemen are the characters that this film wants us to root for.

Anyway, a cop ends up in the mine and then the cannibalistic mutant, who I don’t think is really a mutant, snatches people one by one. You know how slasher films go by now. 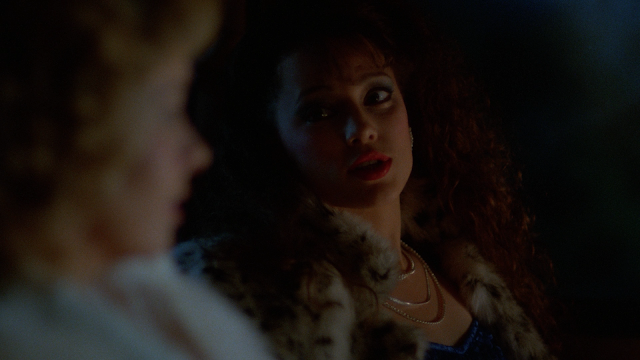 All of this would be all well and good if the film was any good. Sure, the cinematography is pretty good, and the gore effects, when we do get them, are decent enough, but the writing and acting are really bad. Not so good its bad levels, this film never gets to that level, but the “why am I still watching this?” level. The film is set mainly in one location, which is something that a lot of films do, but they at least try to make things interesting. I understand that money is always an issue when it comes to films like this, but the filmmakers don’t really do anything to make things interesting. I mean, this is a film where the characters we are supposed to like couldn’t be bothered in trying to save someone from a slow-moving claw.

The film’s director, Leszek Burzynski, is better known for writing Blood Harvest, which is a horror film known for its nutso performance from Tiny Tim. I am interested in that film as it has a pretty dedicated cult following. Based on this film, however, I don’t really have much faith in Blood Harvest.

Trapped Alive, or as the title card reads “Trapped”, is a pretty bad film that had some actual potential of actually being good. A lot more care could have been put into the goings on in the mine and the characters could have acted, and reacted, to what was happening a lot better. This is a film that I would tell horror fans to watch only if you have nothing better to do. There are so many other, better slasher films out there that could be watched other than Trapped Alive. 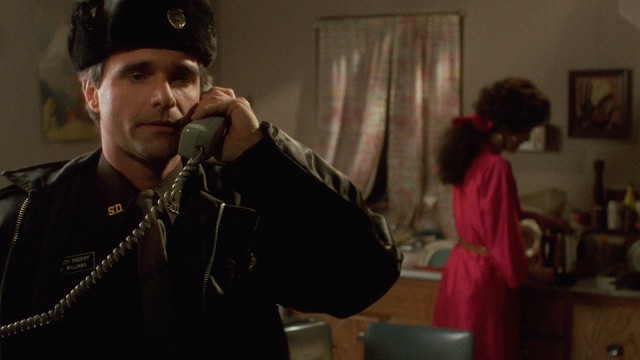 Taken from a brand new 2K restoration from the original camera negative, Trapped Alive looks really good. The main thing to note is that the film can be pretty dark at times, which is something that can be disastrous for a dvd or blu-ray transfer as it can give away any compression artifacts found in the authoring more than a scene set in the daytime can, but I am happy to note that I did not see any compression artifacts or hiccups. Colors, skin tones, detail...Everything here just looks so good that I really wanted the film to be better, but I was still able to appreciate the work that went into this release.

The sound comes in the form of an LPCM 2.0 track. Again, everything sounds great here with the dialogue coming through loud and clear.

English subtitles are for those who want or need them.

I was sent a review copy of this film for review (obviously) and can not review the packaging as I only got the disc. However, I can say that this release features reversible artwork, one side with the original theatrical poster, and the other with some really nice commissioned art from artist Justin Osbourn, who has worked with Arrow Video on a ton of releases including The Slayer, and the House films. 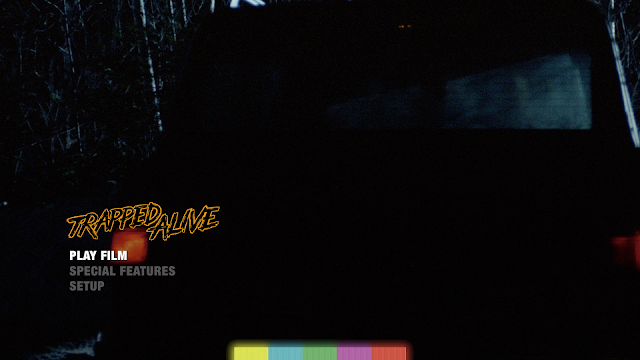 
There’s EVIL Underground… (30m 52s, HD) This is a making-of documentary featuring interviews with director Leszek Burzynski, cinematographer Nancy Schreiber, production manager Alexandra Reed, and actors Alex Kubik and Sullivan Hester. The story of the making of the film is pretty straight forward, but what is really interesting is the story behind the production company who financed the film, Windsor Lake Studios. They bought up 600 acres of land in northern Wisconsin, which could be used in any fashion for any film, and wanted people to come up and use the land to their content. Since the production company owned everything, they wouldn’t have to spend any money renting or securing anything. This brought a lot of comfort to the filmmakers so they could make the best film possible. Of course, this idea would have worked better if it weren’t in northern Wisconsin where winter kicks anyone's ass. There is also the story of hiring, and firing Michael Berryman (The Hills Have Eyes) because he gave notes during a table read and was proving the be a hard person to work with.


Upper Michigan Tonight TV Documentary (22m 32s, SD, 1.33:1) Here we have a 1988 tv documentary about Windsor Lake Studios, Wisconsin where Trapped Alive was filmed. We get a lot of behind the scenes footage that is sprinkled in with interviews with the cast and crew.


Leszek Burzynski: The Early Years (9m 41s, HD) The Trapped Alive director discusses his early forays into filmmaking, starting with working at the BBC all the way to his first feature (as a writer and producer), Blood Harvest. 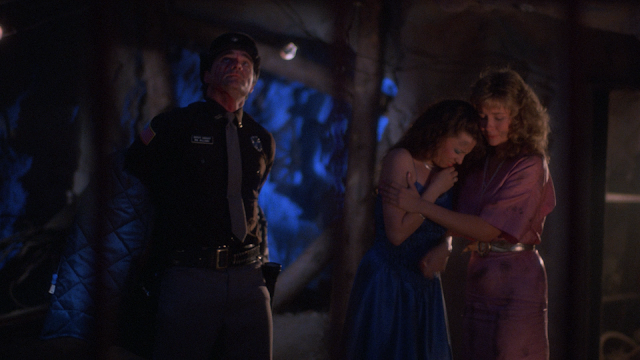 Trapped Alive is a very good film, but it does have its fans so it can’t be all that bad (I guess). The film does get a really great blu-ray though. A really interesting making of, a nice vintage tv doc, and a wonderful commentary from the guys over at The Hysteria Continues. If the film were better I could recommend this blu-ray as an interest piece, and I guess that many will pick it up because of that, but I would only recommend it to those who are fans of the film or are collectors of all things slasher related.