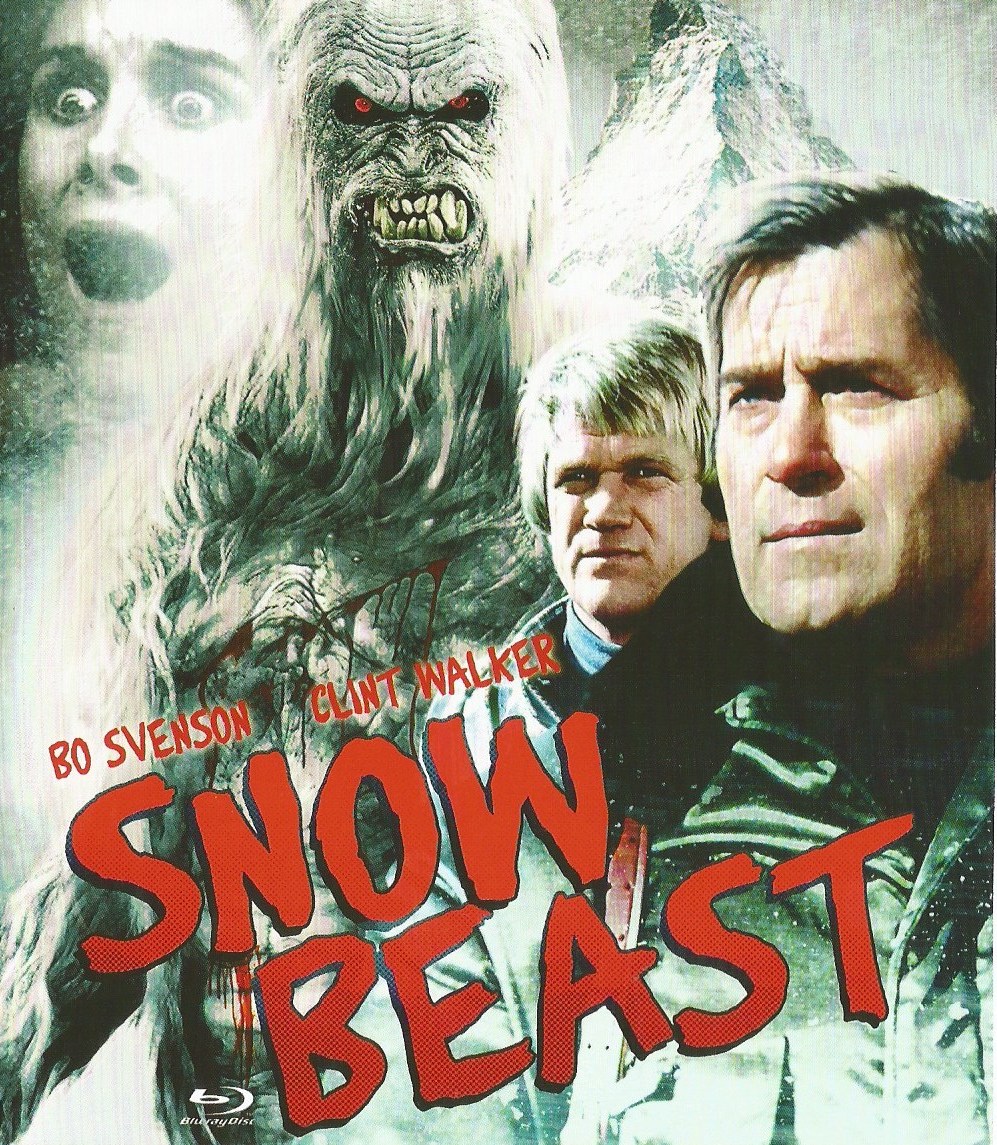 The 70's and the 80's were the golden time for made-for-tv movies with many of them being horror or thrillers. Snowbeast is one of the few made-for-tv films that have actually made their way to blu-ray and we take a look at this blu-ray release to see if it is worth your hard earned money. 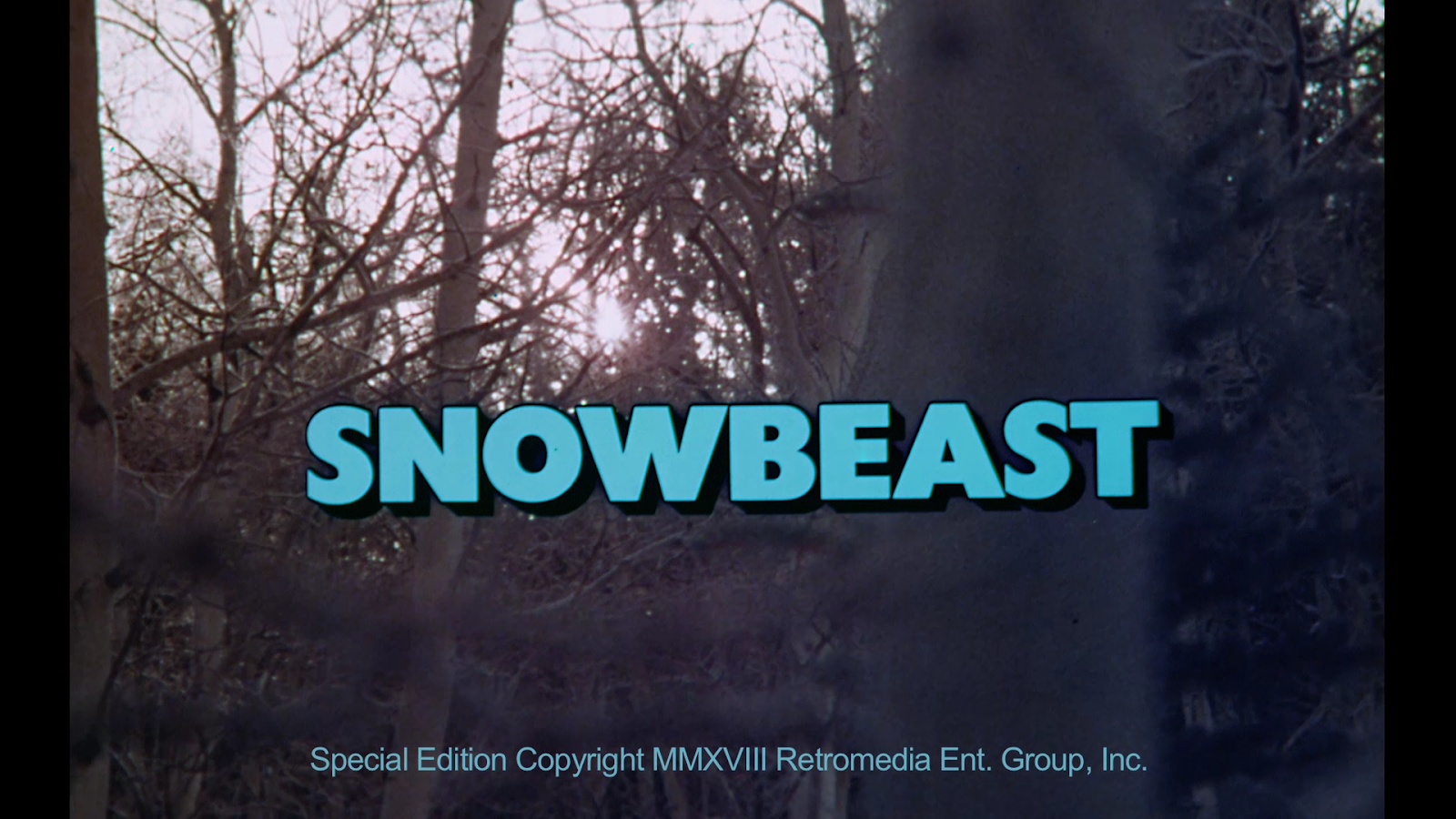 In this made for TV film, an enormous and angry bigfoot creature begins to terrorize a Colorado Ski Resort during a winter carnival, by eating several skiers. At first, everyone insists it is just a bear, until ski patrolman Tony Rill sees a white shadowy beastly shape disappearing into the woods. Although Tony's grandmother Mrs. Carrie Rill, who owns the Ski Resort and the town sheriff, Sheriff Paraday disagree, it soon becomes clear when the creature finally attacks the town.


SNOWBEAST is a film that aired on CBS in April of 1977 and is a pretty damn good film. The film this film is aping off of is, of course, JAWS. What “When Animals Attack” film wasn’t trying to be the next JAWS by copying it? This time we are up in the mountains where a ski lodge is putting on a tournament with different events involving skiing and snow. The lodge needs this tournament as it’s what brings in the tourist money. When a few skiers are attacked by our titular monster, an Olympic skier, his wife, and an old flame of the wife is all that there is to take down this monster and reopen the lodge in order to make money.

I know that sounds snarky as shit, but that is how the film plays out. This snark is not indicative of how good or bad the film. How many films have we seen that are knock-offs of STAR WARS or ALIEN that were actually good films? Quite a few, actually. That is how I feel about SNOWBEAST. Sure, the film is predictable as hell, but the film is nonetheless entertaining. We don’t really get too many good looks at our monster, which is a shame because I thought that it looks pretty decent. We do see a lot from it’s point of view, though, and that helps sell the monster to TV audiences all over the country. Maybe CBS thought that the monster looked too frightening or maybe they thought it looked like shit. Who knows?

What I do know is that the film is a lot of fun. It only runs 72 minutes, which flies by watching it today. I did watch the “International Version” that is also on this disc, and while it fleshes out some character beats and plot points, but doesn’t have the same flow as the CBS Late Movie version. That said, the film plays right to the TV audience with grace and headstrong attitude that monster films today wish they had. The film is well directed by Herb Wallerstein, a veteran TV director who didn’t make any other films than this one, and he does very well with the material. The film looks great and really captures that cold feeling that many films that take place in the snow always seem to forget to add.

SNOWBEAST is a wonderful monster film that I would have loved to have seen on TV when it first aired. I am not old enough to have had that happen, but it would have been right up my alley. I feel that we have become too jaded as a people to really appreciate something like the “TV Movie of the Week”. There was just something special about these types of films and I think that SNOWBEAST is one of the better of these that I have seen. I would rank it up there with DARK NIGHT OF THE SCARECROW. The CBS Late Movie version of the film is the main feature and gets the better treatment overall. The transfer was taken from an archival 35mm print of the film and looks like not much restoration was done to it. The transfer is fairly clean with scratches and whatnot showing up from time to time. There is some coloring issues where shots and scenes will have a different color temperature to them. This doesn’t really take away from the film as we have to expect things like this now and again. Grain is present and the black levels are decent.

We only get a lossy Dolby Digital 2.0 track for both versions of the film and they sound fine. 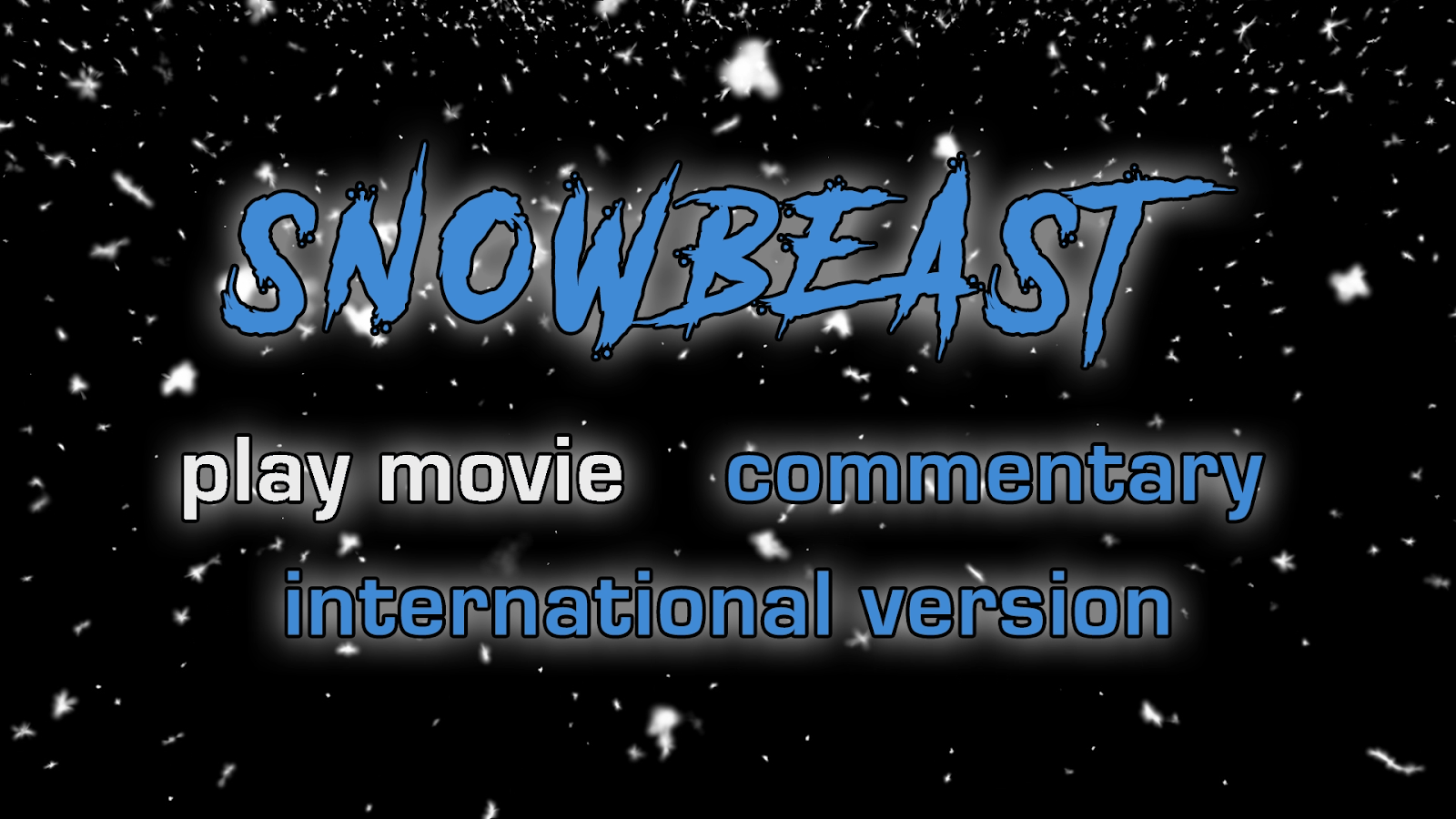 
International Version (1h 28m, HD, 1:33:1) According to the commentary, this is the original broadcast version of SNOWBEAST as well as the one that played in theaters in Europe. This version answers a few questions that one gets after watching the CBS Late Movie version and fleshes things out a bit as well. I found that this version overstays its welcome a bit and would choose the CBS Late Night version over this version. This, however, does not mean that this is a bad version of the film, just not my preferred version. This version may be in 720p only which isn’t the greatest thing in the world. I don’t know why unless Retromedia wanted to fit both versions onto a BD-25 instead of going for the BD-50 which would have cost more. It’s a shame that they did this, but the picture doesn’t look too bad. (Screenshots for the International Version are in THE SCREENSHOTS section down at the bottom of this page.

Commentary. Filmmakers Fred Olen Ray (who also owns Retromedia) and David DeCoteau sit down for a very lively and informative commentary track. These guys are big fans of the SNOWBEAST and have a wealth of information about this and other made-for-tv films of the era. Very earlier on Ray gives us why he chose the aspect ratios for the different versions of the film (I think that he should have given the theatrical aspect ratio to the longer version as that is the one that played in theaters, and the tv ratio to the late night version.). The two talk about their favorite 70s made-for-tv films, which gave me a big list of films to seek out and explain why made-for-tv films often had two different runtimes. The guys even go into “four walling” theaters and how it used to help filmmakers make a profit. Needless to say, but I loved this track and honestly wished that it had been over the longer version of the film just to get more from these two.

Liner Notes by Amanda Reyes. On the reverse side of the blu-ray cover art is a small essay about Snowbeast. 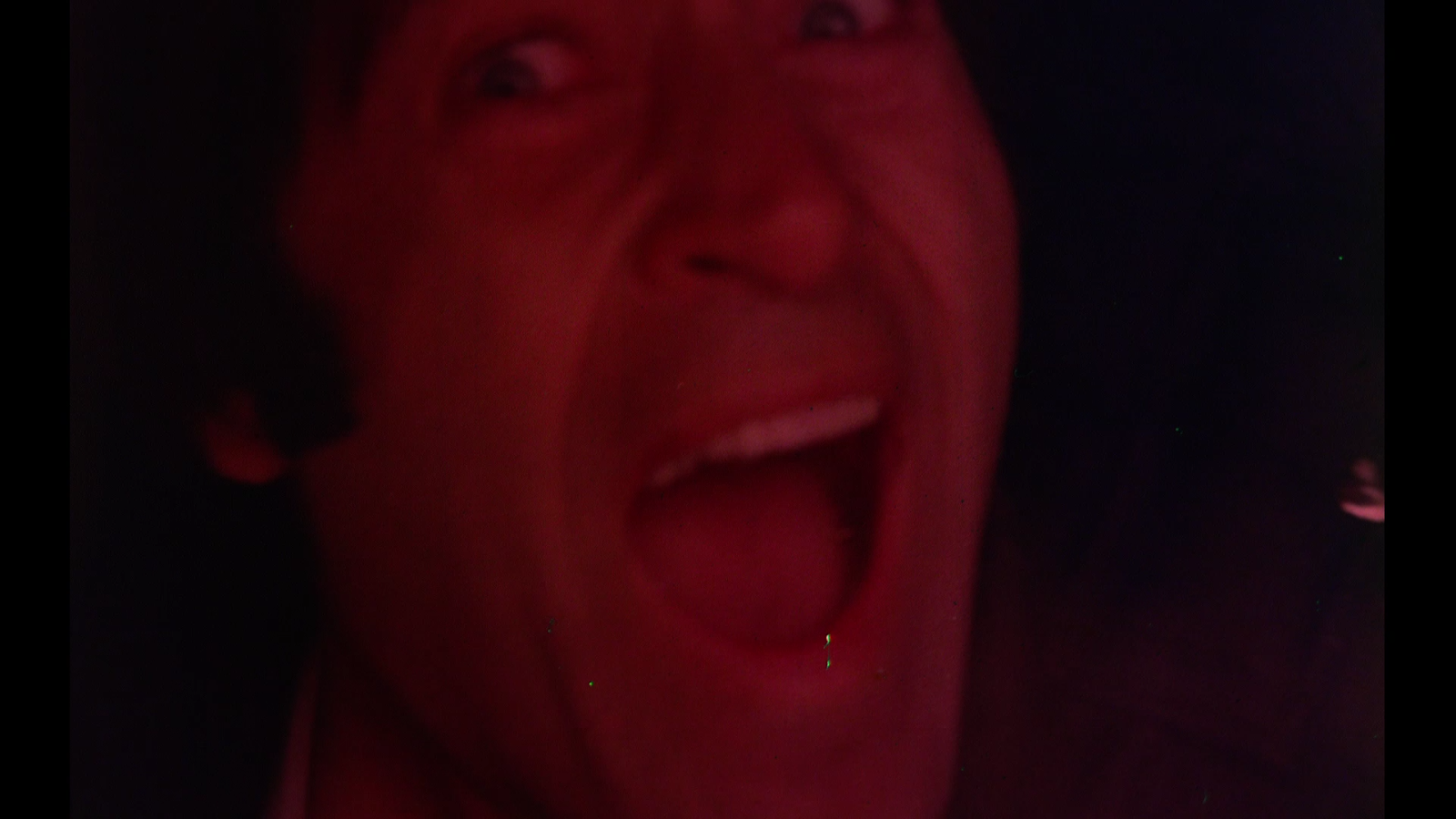 SNOWBEAST is a lot of fun. Sure, we don’t see the monster that often, but we have some great characters and the setting is fun as well. The Retromedia blu-ray is pretty good if flawed. The picture quality is hit and miss with the CBS Late Movie version having the better picture quality while the International version may or may not be in 720p. The commentary track is well worth the price for this release and can not recommend it enough. I wish that more companies would release the vast amounts of made-for-tv films that are out there. There are a ton of them and we need more of them.