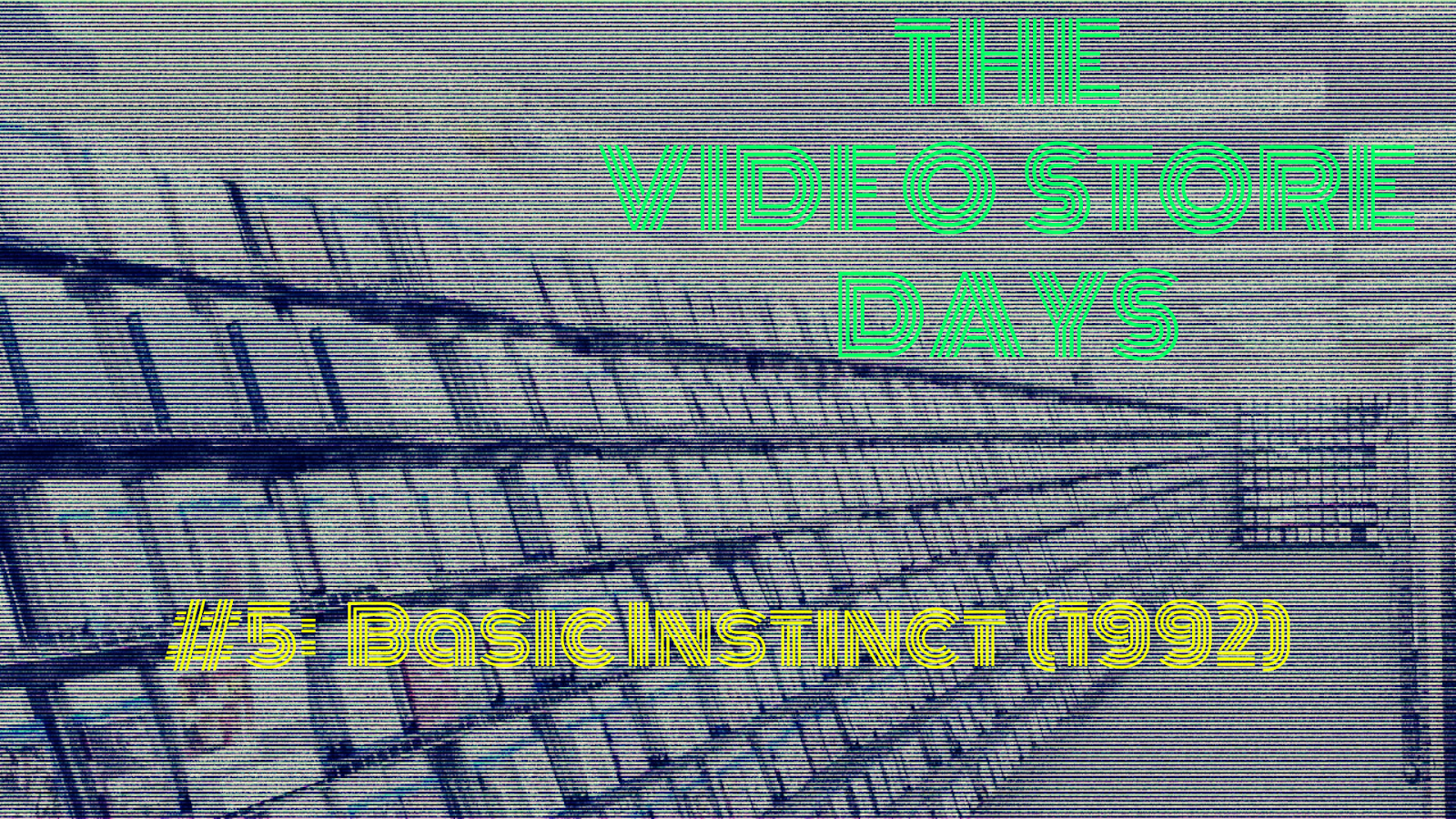 
The 90’s started innocent enough. We got some action films, some dramas, some horror films. It was like any other decade. Then came 1992.

1992 saw the release of BASIC INSTINCT. Directed by Paul Verhoven and starring Michael Douglas and Sharon Stone, BASIC INSTINCT hit all the right notes to become a hit. Douglas was usually known for pumping out hit after hit, but 1992 started off bad for the actor with his film SHINING THROUGH receiving scathing reviews along with poor box office. However, the public would soon forget about SHINING THROUGH as BASIC INSTINCT taking the world by storm.

The film was shot with an R-rating in mind, but director Verhoven has always been a director who pushed the boundaries of the rating. His two previous films, ROBOCOP and TOTAL RECALL, had rough times with the Motion Picture Association of America (MPAA), the organization that Hollywood itself put together to give films their ratings (G, PG, PG-13, R, and NC-17) so that the government wouldn’t come in a do it themselves. There are far too many times governments in other countries have censored films for various reasons. Hell, the UK wouldn’t allow scenes with nunchakus in any film as they were afraid that children would try to replicate the scenes at home.

1987’s ROBOCOP had about a minute of violent footage removed from it before it could retain an R-rating. One minute doesn’t sound like a lot but try watching the R-rated version of the film after seeing the unrated version and tell me that one minute isn’t a lot. TOTAL RECALL was also heavily cut, but we don’t know exactly how much footage was cut. Both of these films are still very violent and bloody in their R-rated versions, so the footage that was cut had to have been way worse.

BASIC INSTINCT was fairly violent, but it also added sexual content to its bag of tricks, which is something that the MPAA comes down harder on than violence. BASIC INSTINCT opens up with the film’s central murder. The R-rated version has the guy being stabbed a few times while being ridden by his killer as she climaxes. The unrated version has the ice pick (the killer’s weapon of choice) going through his eye and face as well as blood gushing everywhere. The MPAA had the scene cut down. There is also a rape that is fairly graphic as well as a scene where Douglas goes down on Stone.

The thing with these scenes is that no one knew what was cut out of the film. The film had gone through a few rounds with the MPAA before getting the coveted R-rating, but the specifics were not known at the time. All the public knew was that the film was very hot and heavy with its sex scenes and that Stone played a bisexual woman with had a penchant for crossing and uncrossing her legs in front of men. This last thing became of a meme before memes were things. This scene was everywhere. Late night hosts were cracking jokes about it, various movie magazines were covering it from all different angles, and films were parodying it. If you brought up Sharon Stone or BASIC INSTINCT, then the leg-crossing scene finds its way into that conversation. I was 12 when BASIC INSTINCT came out and my friends and I even knew about it. It was everywhere. 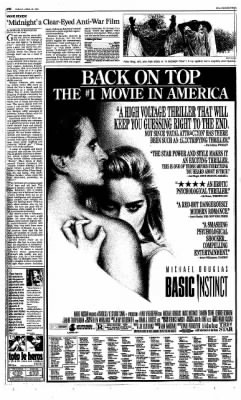 All of these things: controversy, Michael Douglas, Sharon Stone, rumors of how graphic the sex scenes were, battles with the MPAA. All of these things came together and overtook the conversations about film. BASIC INSTINCT opened at number one in its opening weekend and cycled through being #1 or #2 at the box office for it’s first eight weeks of release and stayed in the top ten for eleven weeks. That is the very definition of a film that people can’t stop talking about. The film ended its run in July of 1992 with a total of $117 million in ticket sales. 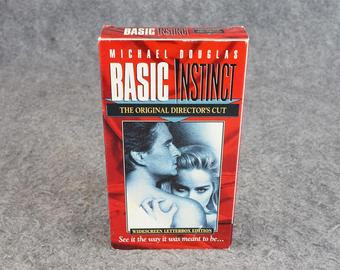 When it came time for the film to be released on home video, the film’s theatrical version was released on VHS and Laserdisc. Of course, it did well on both formats, but the public wanted the uncut version of the film. Their cries were heard and in 1993, the Director’s Cut was released on Laserdisc and VHS. Featuring more than five minutes of cut footage, BASIC INSTINCT was still being talked about a year later. The VHS release just had the added footage along with an introduction from director Paul Verhoven and interviews with the cast and crew. The laserdisc added a commentary track by Verhoven where he talked about the making of the film as well as fighting with the MPAA. The laserdisc had the better picture and audio quality as well. 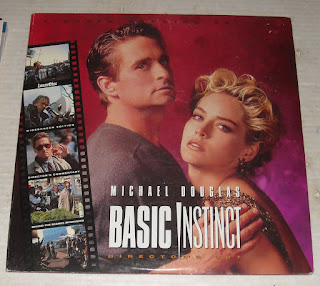 So, is BASIC INSTINCT any good? Not really. The central whodunit is not very mysterious as well know who the killer is from the beginning. The film tries to play it off, but doesn’t do a very good job. The film also wants us to side with Douglas’ character, but he is a scumbag who rapes his ex-girlfriend after they get a bit hot and heavy. Watching it today, I am reminded of the film CRUISING. Al Pacino plays a cop who is tasked with going undercover in the gay community (specifically the S&M portion of the community) to find a serial killer who is targeting gay men. Pacino’s character is a scumbag as well and we can’t side with him at the end of the day. Douglas’ character acts like he is trying to find the killer while getting to sleep with the main suspect which doesn’t really work out for him too well. 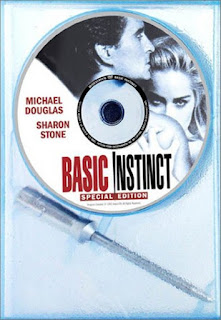 The film isn’t all bad. The film is well shot and directed. Director Verhoven knows how to get just the right reaction that he wants and will do anything to get that reaction. The leg-crossing scene is just one example, but he also takes his time with the sex scenes. These aren’t just scenes that contain sex, but scenes that have their own beginning, middle, and end. He treats the sex scenes as if they were dance numbers in a musical or fight scenes in an action movie. The sex scenes are pretty steamy too. They aren’t down and dirty like many sex scenes that have come before. These are scenes where beautiful people fuck other beautiful people and they can be quite sexy.

BASIC INSTINCT would be the film that launched Sharon Stone’s career. She had already been appearing in films all the way back to the early 80’s. She appeared in a few Cannon films, POLICE ACADEMY 4: CITIZENS ON PATROL, and ACTION JACKSON. Her biggest role (in terms of exposure, not screen time) was as Lori in TOTAL RECALL. Her star power after BASIC INSTINCT lead her to get many starring roles, but these roles (SLIVER, INTERSECTION, and THE SPECIALIST) were mostly just erotic thrillers in much that same vein as BASIC INSTINCT. She did star in CASINO which netted her an Oscar nomination (her only one) as well as THE QUICK AND THE DEAD for Sam Raimi.

Michael Douglas would keep on doing what he was doing before BASIC INSTINCT. He chose most films he did based on whether he thought that the role and the film were good enough for him. Following BASIC INSTINCT, Douglas would star in the criminally underseen FALLING DOWN, the severely underrated THE GAME, and TRAFFIC (2000).

There was a BASIC INSTINCT 2 released in 2006. That film is a stinker. I can see why people flocked to the first film even if I think that the film isn’t all that great. I know that this film was made because everyone involved wanted lots of money, but the film is at all interesting to watch. The actors don’t seem to want to be in the film or they are just bored with the script and the sex scenes aren’t steamy at all. I watched it one time when it first came and have not returned to it again.