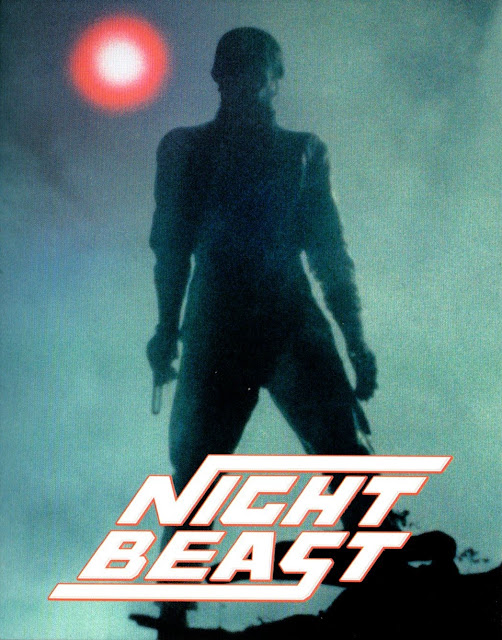 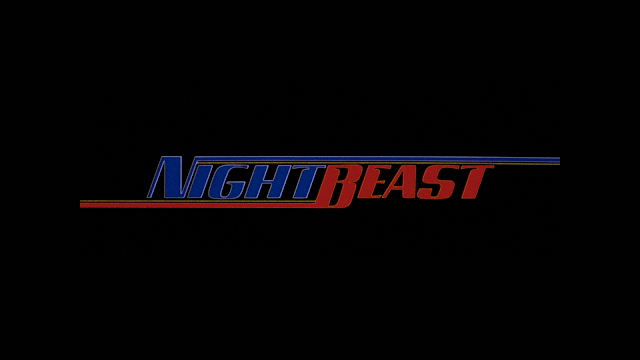 A creature from outer space crash lands in Perry Hall, Maryland. It starts killing anyone it finds, either by shooting them with a ray gun or by ripping their guts out. The local sheriff, along with a deputy and several others, tries to kill the monster during shootouts, but bullets do not hurt it. The group evacuates the rest of the town and continues to fight.


In 2016, a family member gifted me the Retromedia blu-ray release of Don Dohler’s directorial debut, The Alien Factor. The film was an incredibly low budget monster flick that was made with a lot of love and care for the genre. After I finished watching the film, I looked up Dohler and told myself that I needed to see, and collect, all of Dohler’s films. He only directed seven films, but most of them were out of print and going for huge sums on eBay and Amazon.

I then was able to secure a copy of Fiend, released by Massacre Video in 2018. As a hidden bonus on the disc was a kind of HD version of Dohler’s Blood Massacre, so that was two down.

In May of this year, Vinegar Syndrome released what is Dohler’s best film, Night Beast. The film is a kind of remake of Dohler’s first film The Alien Factor and is very good. The beast looks kind of ridiculous (ok, all the way ridiculous) as his face doesn’t move a bit. Kind of reminded me of Rawhead Rex. The beast crashes on Earth and starts shooting his laser at people. Soon enough the police call what seems to be everyone in the town that has a gun, and then go after the beast.

Now, this could have been a really cool short film showing what would happen if a murderous alien crash lands in a small town, but Dohler wants it to be more than that. He finishes the battle between the townspeople with guns and the alien within the first twenty minutes of the film and then turns the film into a monster on loose film mixed with some Jaws and a slasher film, you know, just in case. 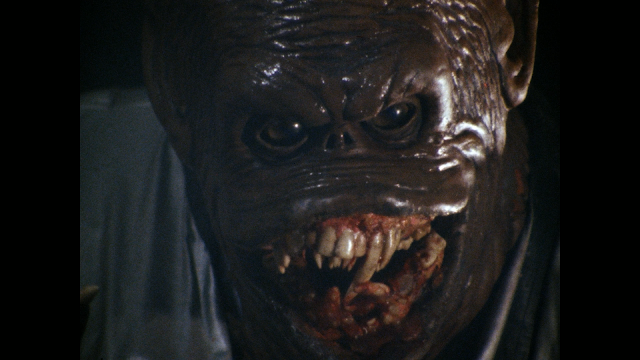 Dohler gives the film a tremendous forward momentum in the first half of the film, something his other films lack, but then kills it because he had to add a sex scene into the film because it was the 80’s and every horror film had to have a sex scene even if it doesn’t make any sense for it to be there. I think this scene actually hurts the film because it makes the film a bit to get going again. If Dohler hadn’t added the scene I think the film would have had been able to keep the pacing from the first half of the film.

This is also Dohler’s goriest film as well. His previous films didn’t really feature any gore so this was a big step up for him and he takes on the challenge quite well. The effects are handled well and his camera never shies away from showing us the goods. The film was made on a $14,000 budget, in an era when not everything was known about how effects like this were done, so I was really impressed that looked as good as they did. Guts are ripped out of a guy’s body, a woman gets clawed to death, and there are a few things done to heads as well.

The film also has a really good score. The score was a mix of library synth music and new music composed by a teenage J.J. Abrams. Abrams really knew what he was doing and his score sounds great when paired up with what Dohler shot. I wish that there was a CD release of the score.

Night Beast is a really fun monster flick. There is a lot of care and love put into this film and it pays off in spades. The monster looks great (for the budget of course) and the effects are gruesomely gory. This was Dohler’s third film so he knew what he was doing by this point and he really makes the film his own. I am awaiting the chance to obtain his other films so that I can watch them and appreciate what Dohler brought to the world of low budget filmmaking. 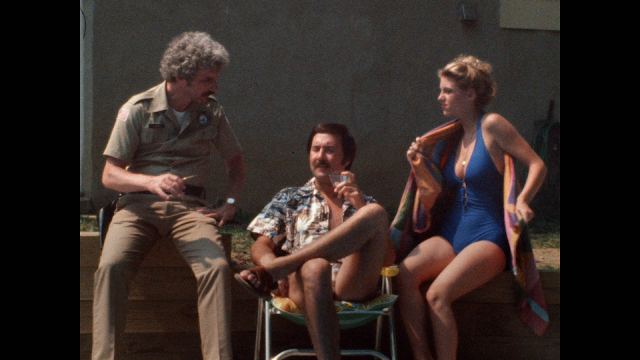 Featuring a “brand new 2 restoration from its 16mm camera original” and presented in the film’s original aspect ratio of 1.33:1, Night Beast looks great. Blacks are deep and inky, colors look natural, as do skin tones, and the laser beams really pop. Film grain is very present here and gives the film a film-like feel. Close-ups give us the best detail (as it should), but the medium shots are no slouches. The beast himself looks just as rubbery as you would expect, but that’s why we love these kinds of films.

The sound, from a DTS-HD MA 1.0 mix, really harkens back to a day when simplicity was welcomed. The focus for the track is mostly on dialogue, but the score, mostly composed by a young J.J. Abrams, does some shining as well.

This is my first Vinegar Syndrome release that came with a slipcover (I own a lot of their releases but none of them ever came with slipcovers) and I am here to tell you that I am truly impressed.


The slipcover features the Night Beast in silhouette on the front and a side shot of his face on the back. There is some shininess to the slip and the title, on the front and the two spines, is embossed. The slipcover is also fairly thick giving the release a bit more weight than other releases with slips. The slip feels very sturdy and I feel like it could stand up to things that a normal slip wouldn’t be able to. This is one of my favorite slipcovers ever and I look forward to buying more. 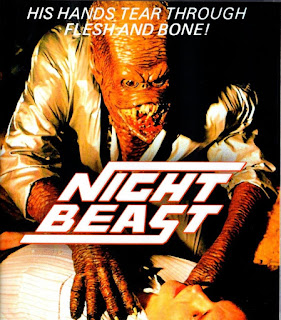 A clear two disc blu-ray case is underneath and there is an option for covers here. One side features a screenshot from the film of the Night Beast as he is about to attack someone who is lying down. 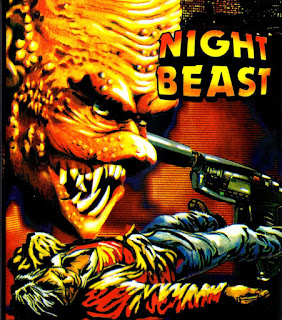 The other side features some handmade artwork of the Night Beast with a gun being pointed at his head. A body lies on the ground underneath him. 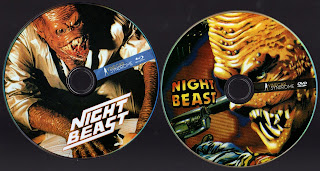 Both discs are REGION FREE.


Night Beast Returns (25m 9s, HD) Archival interviews with cast and crew. We begin with talk of the first version of Night Beast. This version was directed by Dave Geatty and shot for a few days before the cast and crew went to Dohler to tell him what is happening on the film. It turns out that Geatty was wasting money and people’s time on trying to get the perfect shots. Geatty resigned before Dohler could fire him. Dohler then wanted to recoup some of the cost and the cast and crew so he made the film Fiend. Talk then turns to J.J. Abrams, who was 15 at the time. He wanted to be a writer for Dohler’s magazine, CineMagic and had written many articles that he sent to Dohler. During a conversation, Abrams made a mention that he wrote music so Dohler hired him to do the score for Night Beast. Dohler was using a sound library’s synth music, so Abrams wrote music for scenes that Dohler didn’t have music from the library to use. Surprisingly, Abrams is interviewed and talks about how he came to know Dohler and about the music he wrote for the film.


An Electric Performance (15m 44s, HD) An interview with actor Jamie Zemarel. He talks about his start in acting while in junior high and his continued acting all through high school and college. Night Beast was his first starring role in a film, but not his first time on a film set. He was an extra in Grease. He talks about shooting the film and riding a motorcycle, although he was doubled by the motorcycle's owner for some of the “bigger” stunts.


Crashing the Set (14m 31s, HD) Interview with visual effects artist John Ellis. Ellis was contacted by the film's producer, Dave Ellis, about doing the effects for the ship crashing on earth and its flight through space. He talks about how they did the effects, from building the miniatures to the explosions seen during the crash. He tells a kind of the humorous story of how Dohler called him after the film was completed to tell him that another person had done more effects for the film than Ellis did and therefore should send back some of the money Ellis was paid.


Shooting the Night Beast (19m 4s, HD) Interview with director of photography Richard Geiwitz. He talks about his start in photography while in college and how he moved over to cinematography. He learned how to light and compose film shots while working on many short films in the early to mid 70’s. He talks about how he met Dohler through Dohler’s CineMagic magazine and became an actor on The Alien Factor before doing the photography and acting on Fiend and Night Beast.

Visual Effects Gallery (4m 16s, HD) a montage of behind the scenes photos of the effects in various stages on completion. The film’s score plays over these black and white photos. 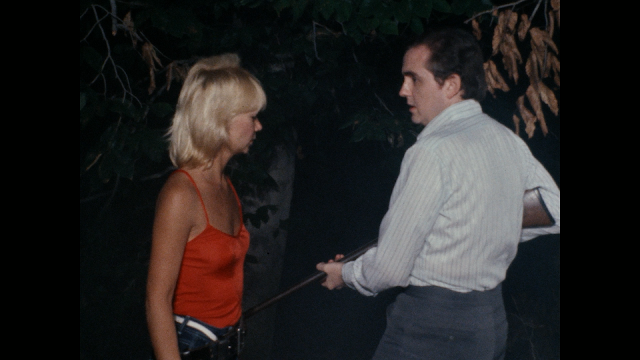 Night Beast is a real treat of a film. The film is a lot of fun with some really cool gore and a score that really makes the film feel bigger than it actually is. While the acting isn’t perfect, and the pacing could have been tightened a bit, there is no doubt that Night Beast is Dohler’s best film and a really fun monster flick. The blu-ray is fantastic. The picture and the sound are amazing and the special features package is really worth the time. This blu-ray belongs in any horror fan’s collection.