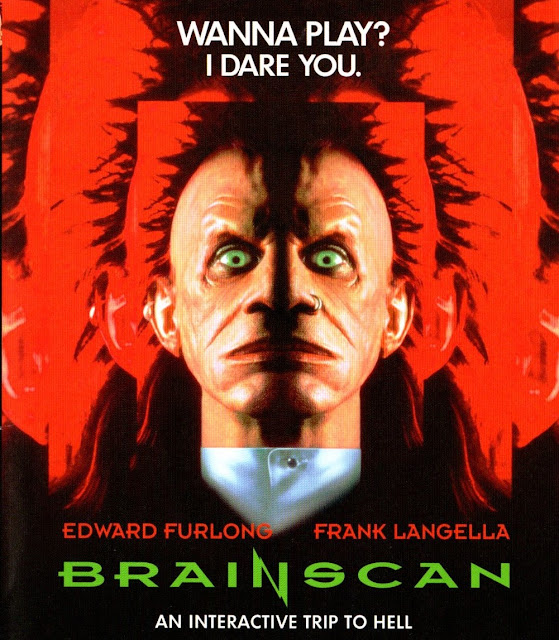 Rating: R (strong violence and language and some sexuality) 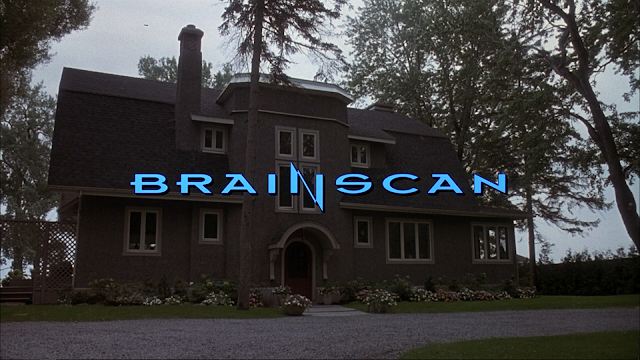 A lonely teenage horror-movie fan discovers a mysterious computer game that uses hypnosis to custom-tailor the game into the most terrifying experience imaginable. When he emerges from the hypnotic trance he is horrified to find evidence that the brutal murder depicted in the game actually happened -- and he's the killer.

I have a lot of nostalgia when it comes to Brainscan. I had been getting into horror pretty big time when Brainscan was released in theaters. Although I did not get to see the film in the theater (my father could only take so much horror so I had to be careful with my selections.) I did rent it the moment it hit the video store. I was entranced by the film. I loved the cyber angle and thought that the film was wildly inventive and had some great scenes.

Time has not been the best to good ole Brainscan. Not having seen the film for about twenty years, I picked up the new Scream Factory blu-ray and was ready to be taken away by the film. I was to a certain extent, but the film has many flaws. The acting from our lead (Edward Furlong, Pet Sematary 2) is not very good. He is a competent actor, but here he seems off. You find out in the special features that his life was in the shitter, so there is that, but he just isn’t on, regardless. There is a scene later in the film where he is evil for a minute or two and he really turns it on. He is good in that scene, but the rest of the film he isn’t. 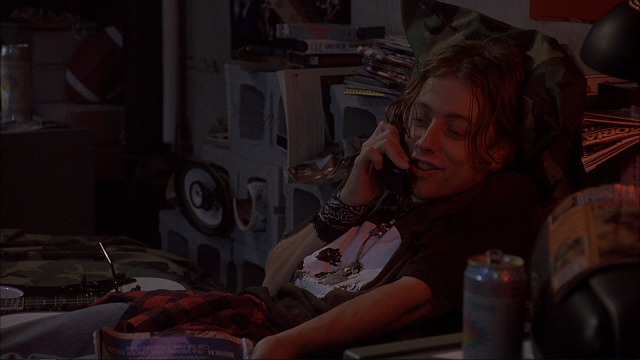 The film also doesn’t really know what to do with the police. There is a detective played by Frank Langella (Masters of the Universe) and he is quite good in the film, but he isn’t given anything to do. I mean he breaks into Furlong’s house, but that doesn’t seem to be that much of a problem for him as he just walks right into the house. I know that no one in the movies knows how to lock their doors, but this is ridiculous. Other than that, Langella just exists in the scenes, just to move the film along. I wish that they had done more with the actor. I mean, he IS Frank Langella. Use him.

The film has some pacing issues as well. Scenes seem to come and go without much thought as to how they are supposed to work. They work well enough, but the film can be dull at times.

All of that being said, I did like the film all over again. Director John Flynn does a really good job at building dread throughout the film. It rains for a majority of the film and that means doom and gloom and Flynn captures that very nicely. The grey, colorless look to the film actually works in its favor unlike a lot of films today that take out the color to make the film more “gritty”. 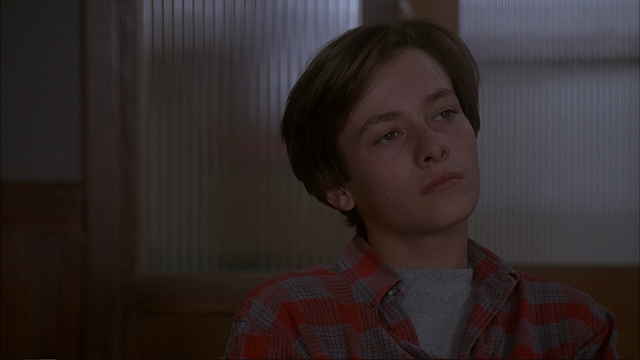 The character of Trickster (T. Ryder Smith) is the discovery of the film. His introduction is a classic (even if the CGI isn’t good at all) and he is the comic relief of the film. The way he talks, eats, dances, and listens to music is completely original and makes the film a lot better. The original idea for the character was for him to be unseen, only a voice on the phone. The filmmakers make the very smart decision to cast a great Shakespearian actor and let him do his thing. Smith makes the character his own and it is a shame that he never got to play him again.

In the end, Brainscan is a good film that I remember being better. It hasn’t aged all that well, but the stuff that was good about the film still is. I love the way the film looks and the character of Trickster is a masterstroke. The film is a 90’s film through and through. 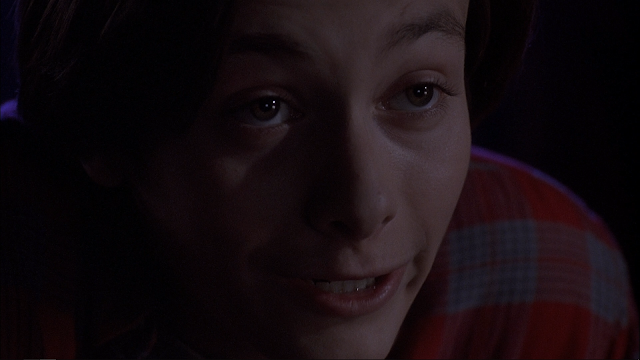 Presented in 1.78:1 (opening the film up a bit from its original aspect ratio of 1.85:1), Brainscan looks pretty good. This not a new scan, but that doesn’t really matter here as the master is still nice. Like I said in the film portion of this review, Brainscan is a dreary looking film. Grey is the primary color of the film and that is captured nicely here. The look of the film is depressing and that look is here in all of its glory. There is a bit of color here and there, and the sun does shine in a scene or two, but depressing is what we get for the majority of the film. There is also a bit of film grain and detail is moderately high.

The sound, in the form of DTS-HD Master Audio track, works for the film. Dialogue is crisp and clear and the music, both licensed songs and original score, come through loud and clear.

Brainscan comes to us courtesy of Scream Factory. 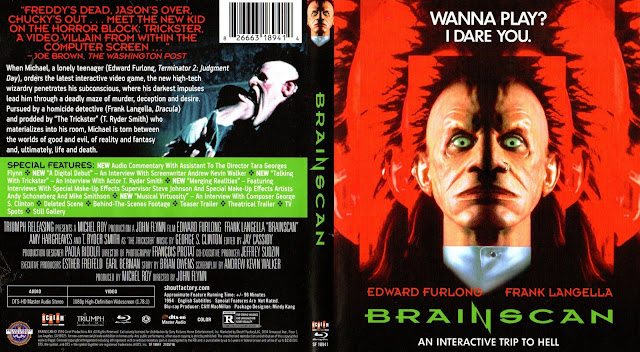 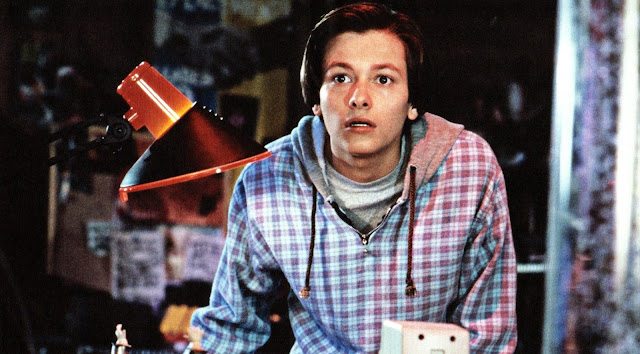 There is also some nice inner art. 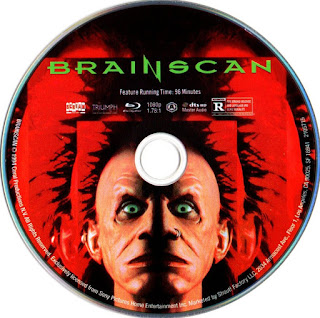 The disc art is the same as the front cover. 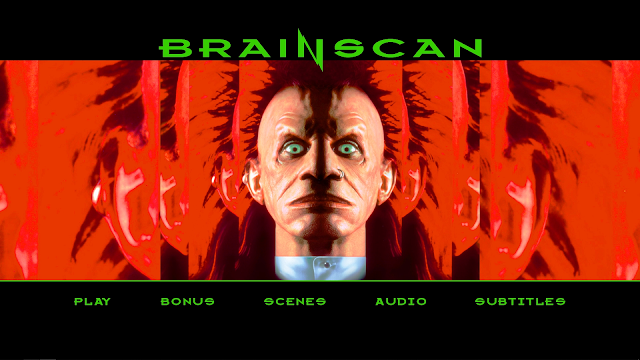 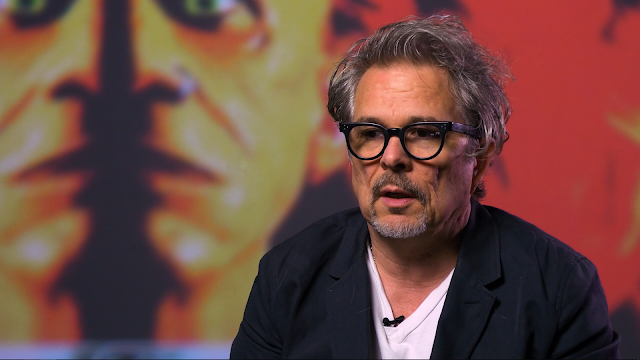 Virtual Debut (14m 25s, HD) This is a brand new interview with screenwriter Andrew Kevin Walker. Walker talks about how this was the first script he ever sold. His parents helped him out when he was struggling out of the gate. He also talks about how Trickster wasn’t a flesh and blood character and how he didn’t even know the film had been made until he saw the film’s trailer. 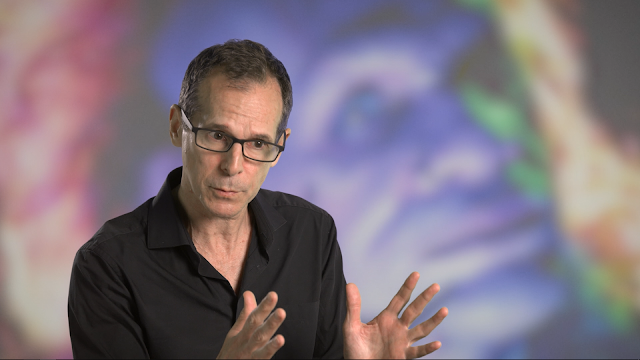 Talking with Trickster (13m 39s, HD) T. Ryder Smith sits down to talk about his debut feature film. He went in for a voice acting gig and got hired to be both the voice and body of Trickster after the filmmakers changed their minds in regards to the character. Ryder talks about how the character was originally supposed to be more of an S&M, leather-clad character, but the director wanted the character to be more rock and roll. Ryder also talks about having to act through all the make-up they put him in and his friendship with Furlong. 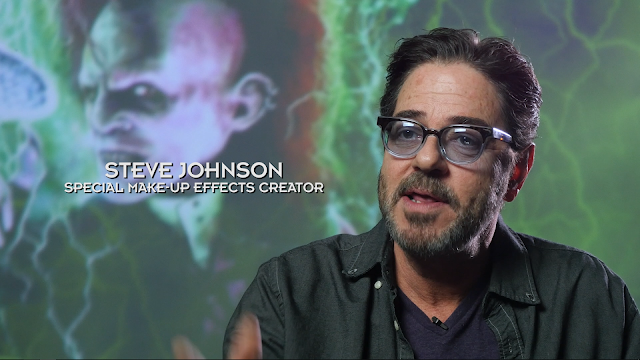 Merging Realities (19m 4s, HD) Effects artists Steve Johnson, Andy Schoneberg, and Mike Smithson are on hand to talk about the work they did on the film. They talk mostly about the Trickster character as the film isn’t make-up heavy outside of the character. Smithson was on hand to do the make-up for the scene where Trickster and Furlong merge. In the film, it is just Furlong with some make-up on. Originally, the make-up was a multi-faced monster. Johnson and Schoneberg also talk about the time they were arrested, detained, and deported from Canada because one of the producers on the film wanted to save $50 and not give the guys the work permits they needed. 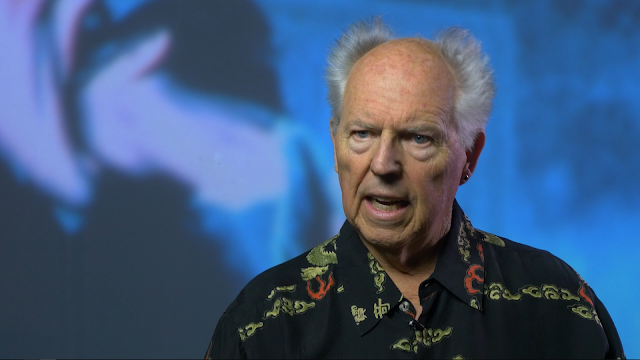 Musical Virtuosity (11m 24s, HD) The same year that Brainscan was released (1994) another film was also released named PCU. That film featured a singer by the name of George Clinton. He was the founder of P-Funk and dressed very wildly. I liked the music in the film and when I saw Brainscan, with music by George S. Clinton, I thought that they were one in the same. The internet was still in its infancy so I didn’t really have a way to know the difference. I thought this for years until I saw what the other Clinton looked like. They couldn’t be more different. That being said, this is a nice interview with the composer who talks about his craft and his take on the film. 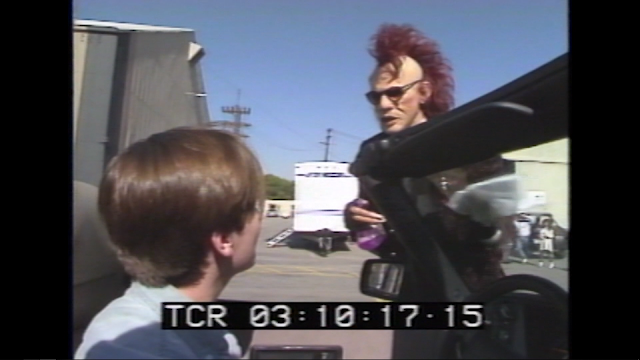 Trickin’ with Trickster (5m 9s, SD, 1.33:1) Some behind the scenes footage of Edward Furlong and T. Ryder Smith having fun during their downtime. 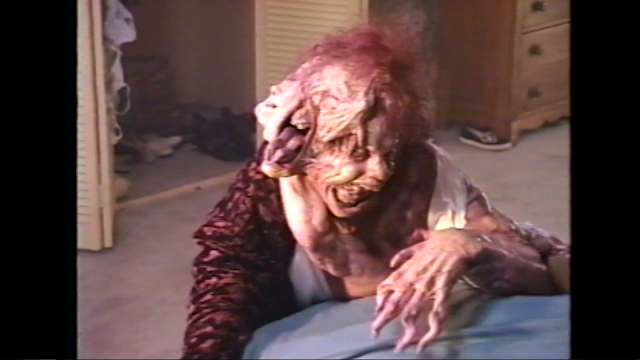 Deleted Scene (1m 38s, SD, 1.33:1) This is the scene of the alternate “merging” that is talked about elsewhere on the disc. This is the only way this footage survived.

Audio Commentary with Assistant to the Director Tara Georges Flynn (found in the set-up menu) This is a very scene specific track. It is more of an interview between Flynn and Michael Flesher of Red Shirt Pictures. 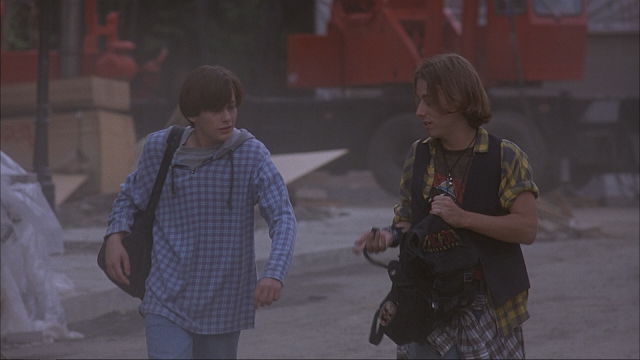 Brainscan is a film worth checking out even if its due to the time period the film was made in. The blu-ray is very nicely put together and serves the film quite nicely. It is just a nice feeling to finally have Brainscan on disc. 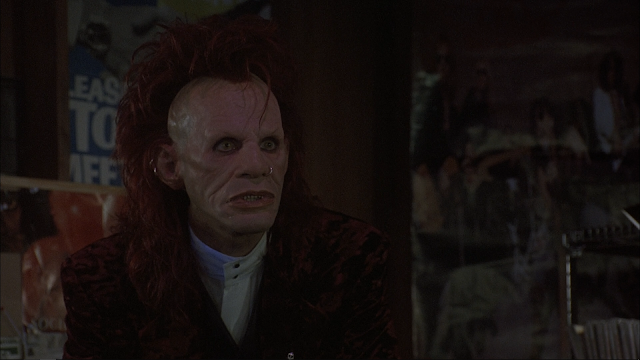 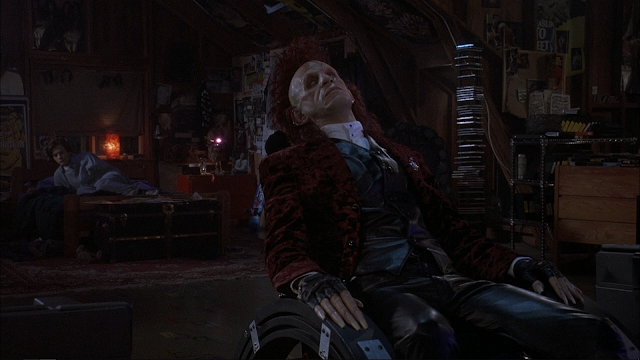 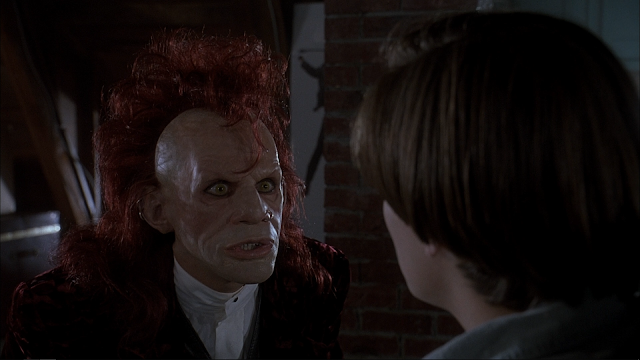 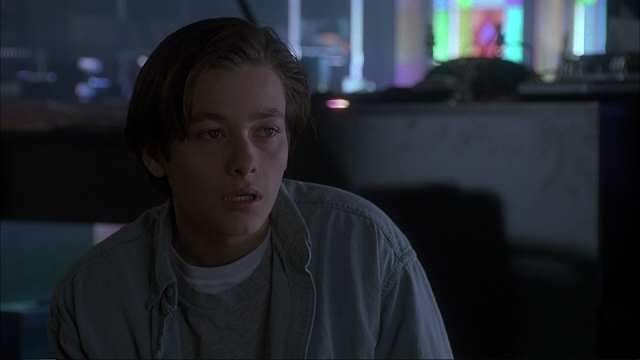 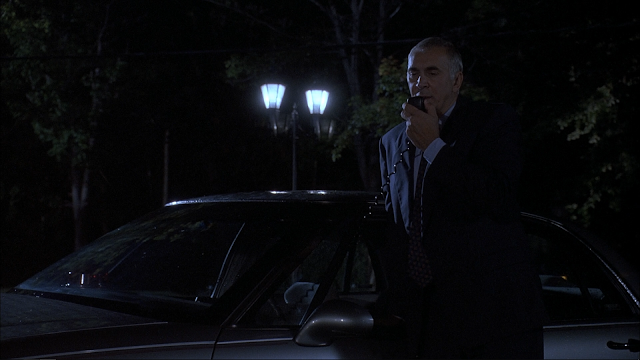 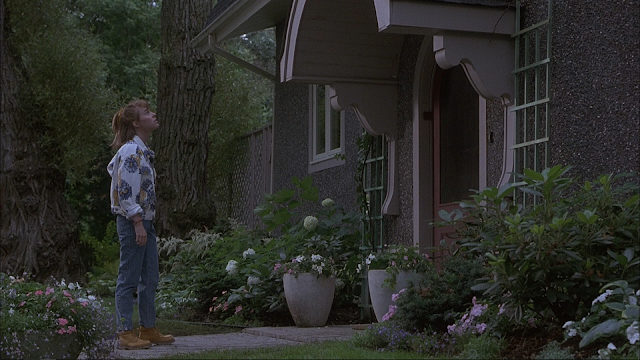 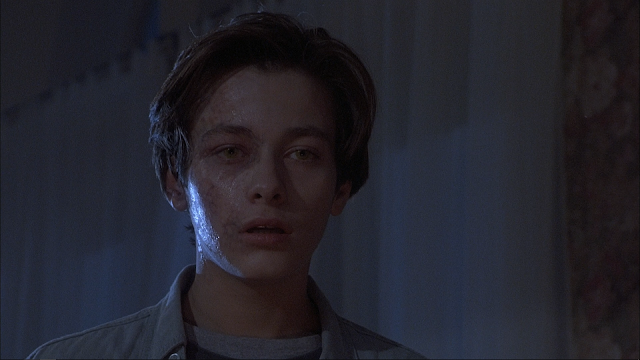 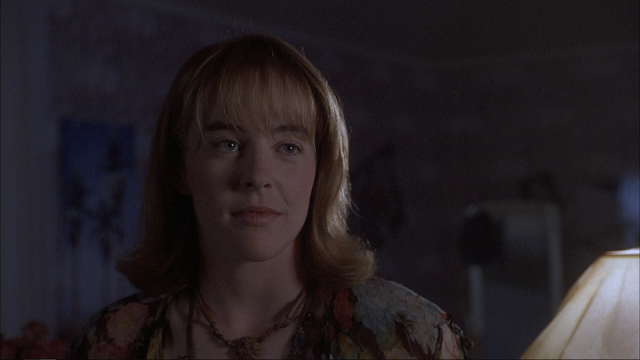