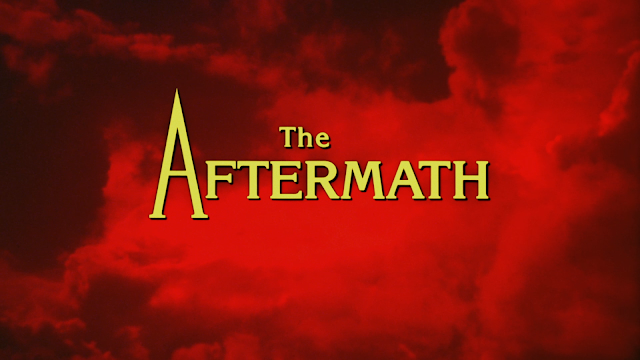 I had never heard of The Aftermath before I watched it. I went into the film totally blind, outside of knowing that it was a post-apocalyptic film. So, how does the film fare? 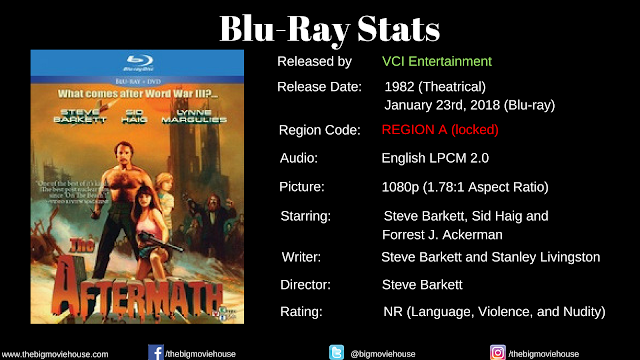 Here you will find the extras that were part of the Roan Group Laserdisc Classics line and the features are ripped straight from the laserdisc. Nothing is broken up. It is all just one long feature separated into four chapters. What we get is:


All of the interviews are under two minutes long with none of them being interviews per say, but more like the people just stating some facts or telling a quick story. Fred Olen Ray even gets cut off mid-sentence so you know that these interviews were much longer. They probably needed to fit on the one side of the laserdisc after the film so there was not too much room to work with.

You really don’t need to see the film after watching this trailer.

We get a two-minute text crawl (why a text crawl?) informing us of what this short film is all about. It turns out that it shares a lot of story elements with The Aftermath, with Steve Barkett playing the same character (I don’t know how). I liked this a lot better than the main film. The direction was a lot better (Barkett did not direct this) and the ending is pretty good.

Presented in LPCM 2.0, this is the entire score that was recorded for the film by composer John Morgan. We need more features like this as many film scores never had an official release.

After yet another text crawl, we are shown an extended scene from Steve Barkett’s only directorial feature, Empire of the Dark, and after watching this, I can tell you that I will not be seeking that film out. I like to give directors a second chance. Maybe they didn’t fare well on their first film because of script problems, studio interference, etc. Hell, if we went by first features alone, David Fincher would not be a household name. This, however, looks really bad and not in a good way.

The elder Barkett is talkative and full of stories and facts. The younger Barkett doesn’t really have a lot to say outside of “There’s my sister. She looks scared.” This track is, in fact, better than the film is commenting on. I would actually suggest watching the film with this track on because then you won’t have to hear the horrible acting. This track was recorded in 1997 for the Roan Group Laserdisc Classics laserdisc.

The Aftermath comes to us from VCI Entertainment as part of their VCI Retro Elite line. 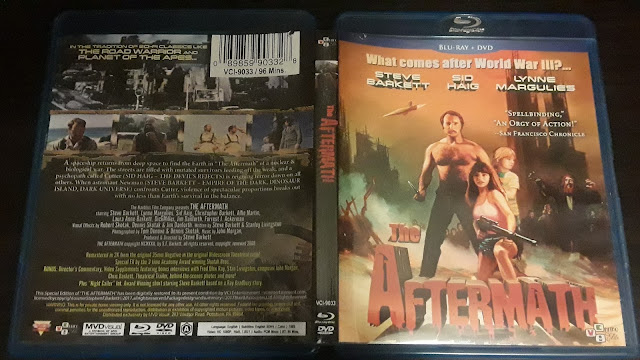 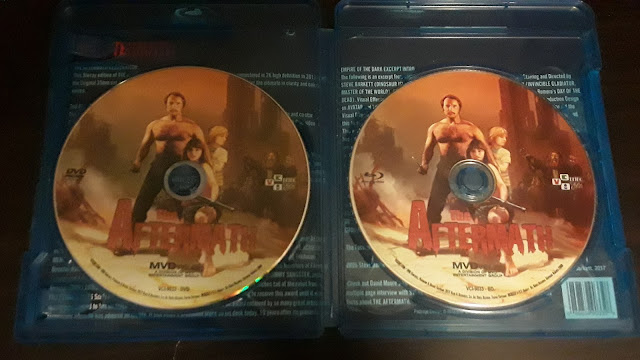 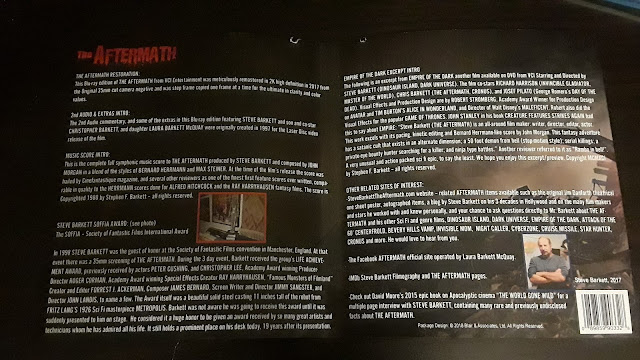 The blu-ray is REGION A (locked) and the DVD  is REGION 1. 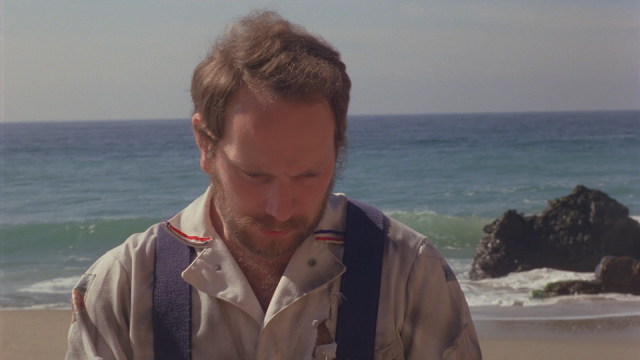 Framed at a 1.78:1, The Aftermath looks way better than it ought to. The picture holds a surprising amount of depth and gives us some good immersion. Colors are accurate and bright. Blacks are not the deepest, but they do hold up well. The image is crisp and clear, but towards the end, starts to get out of focus in some shots. I can’t tell if that is how the film was made or if it is a problem with the transfer. I am going to say that it was a problem with the film itself and not the transfer. There is also a thin layer of grain and I didn’t detect any digital manipulations. Needless to say, but I was pretty impressed with this transfer. 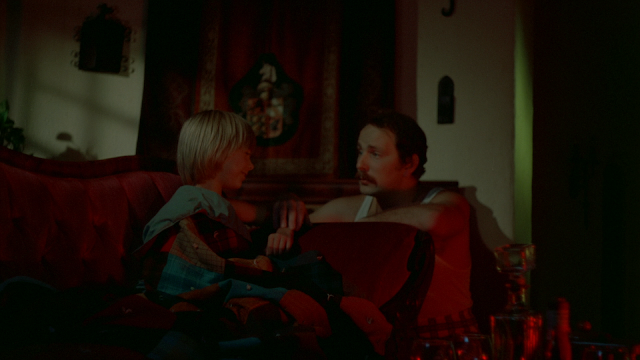 The LPCM 2.0 track provided here is pretty good. Most of the dialogue can be heard and understood, but that is mostly the production’s fault and not the track’s fault. The score, by John Morgan, comes through crystal clear and is really good too. 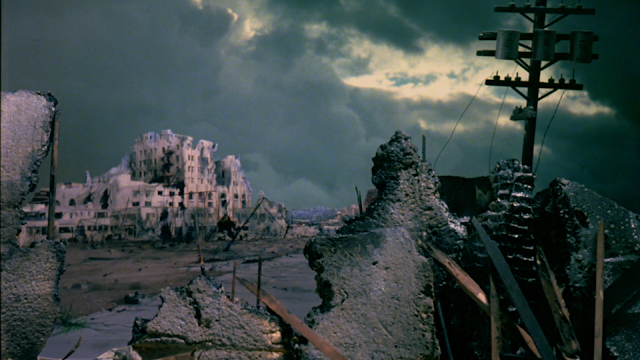 Two astronauts return to earth ("a few miles off the coast of Los Angeles") to find that it has been destroyed by nuclear war. L.A. has been taken over by Cutter and his gang of outlaw bikers (straight out of the 70s with bell bottoms and everything). Cutter rapes and pillages. Of course, there are also mutants. The astronauts hook-up with the only normal people left: two good-looking women, and two cute little children; a boy and a girl.


Anyone who has been a reader of this site knows that I love when films are made from the heart. Instead of the assembly line of Marvel and Star Wars films that we have been getting, I love a film that is made because the filmmakers involved have a love for the genre, craft, etc. This is not to say that the big studio films can’t have heart, but most of the time they don’t.

The Aftermath is a film that was made because the filmmakers have a love for the craft and the sci-fi genre. So it should be a good film, going by my standards. Yes, it should be a good film, but it isn’t. The Aftermath is one of those rare films where love and respect don’t mean a damn thing. The film wasn’t made for the money, but the heart and respect that the filmmakers have doesn’t really show up on camera. What we are left with is a film that has almost nothing going for it.

Well, there are a few positives to be found here. First, the effects are pretty good. They were done by the Skotak brothers, who would go on to win many Oscars and other awards for their work on Aliens, The Abyss, and Terminator 2: Judgement Day. The skylines of the ruined cities are beautiful and tell a much better story than the one told in the main plot. Also, the makeup work is pretty good as well, although, the budget limitations can be felt when viewed in HD.

The second thing that I liked about the film was the score. John Morgan, who has worked in mostly low budget films, does a great job of bringing an A-list score to a Z-grade film. His score feels very much like a Jerry Goldsmith score and is present for most of the film, which is a rarity in low budget films.

That is really all I liked about the film. I always try to get the good out of the way first because I like people to see the positives in a film first before hitting all of the negatives.

I understand that the film was made for a very low amount of money, but there are some things that should have been handled a bit better.

I was looking forward to The Aftermath. I had never heard of the film and it looked like it could be a fun time. It wasn’t. I had a hard time getting into the film and I know that I got distracted a few times, but that just goes to show how dull and lifeless the film is. I have been able to get through far worse films because they made whatever shit they were trying to sell me look interesting. The Aftermath does try to combine 50’s sci-fi with 70’s sleaze, but instead of getting a halfway decent film out of it, we get a film that doesn’t really know what it wants to be. Hell, the film introduces a laser gun towards the end of the film. Why would you take something that has the potential of being cool and make it an afterthought? I would say it was because the director was too focused on making himself look good, which he doesn’t. Skip The Aftermath and watch something that aspires to be more, like Mad Max or Def-Con 4.

The Aftermath is an awful film. It is poorly acted, poorly shot, and has huge pacing issues. This is not a "so bad it's good" film, just a bad film. I am sure that there are those out there who will find humor in the film. I did ocassionally, but the film has too much going against it to be funny. The film is just really bad. It isn't the worst film I have ever seen, it is just a few notches up. Skip this film.

The blu-ray, from VCI Entertianment, is pretty good. The picture quality is much better than I expected, given the film's low budget and the sound is nice as well. The special features are ok. The commentary track saves the day, though, as it is the single most thoroughly enjoyable thing on the disc. This is a worthwhile purchase for those who are fans of the film. 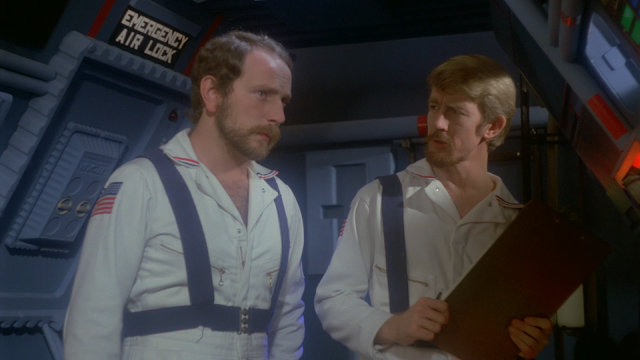 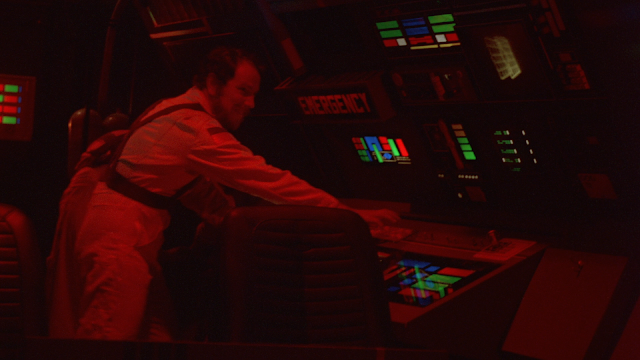 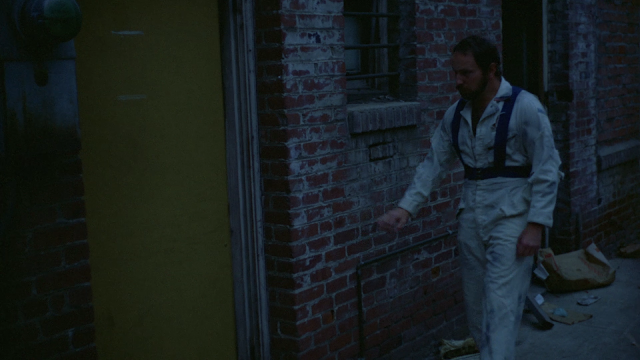 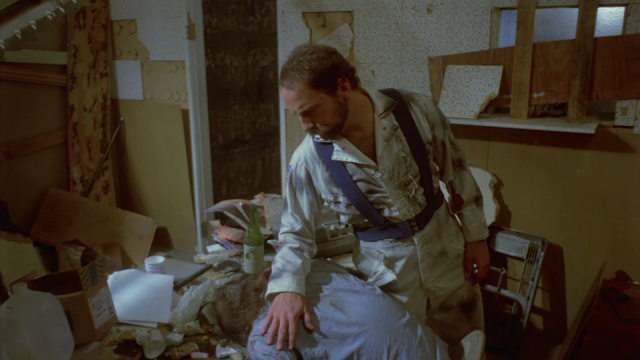 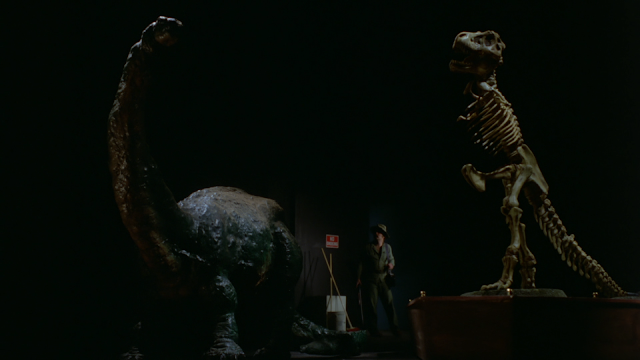 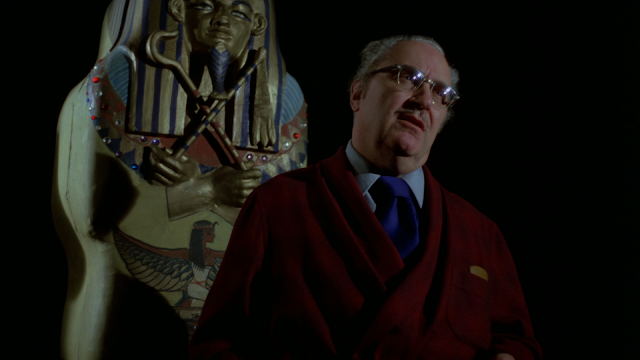 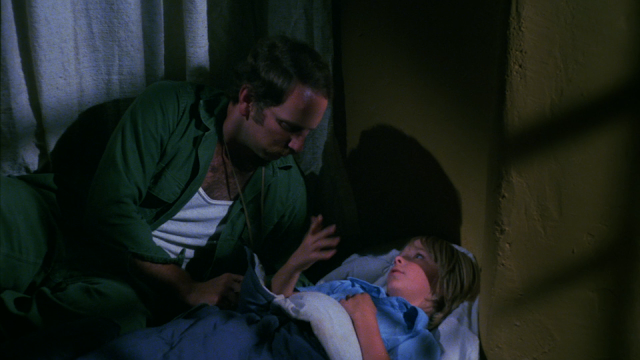 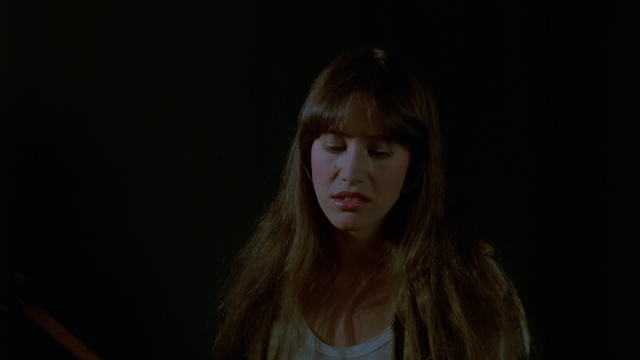 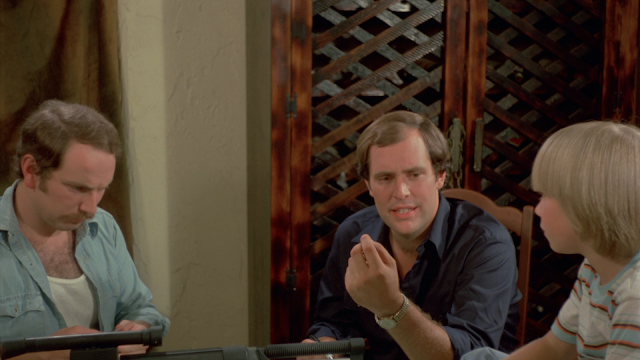 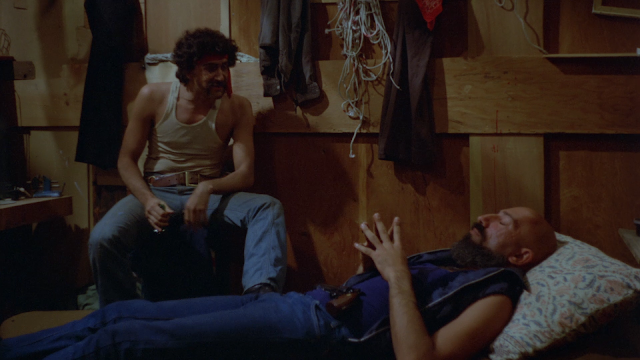 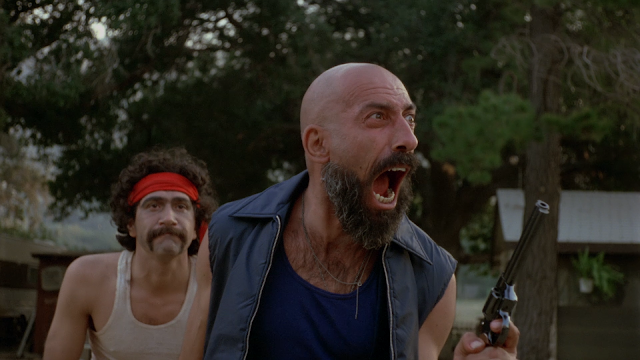 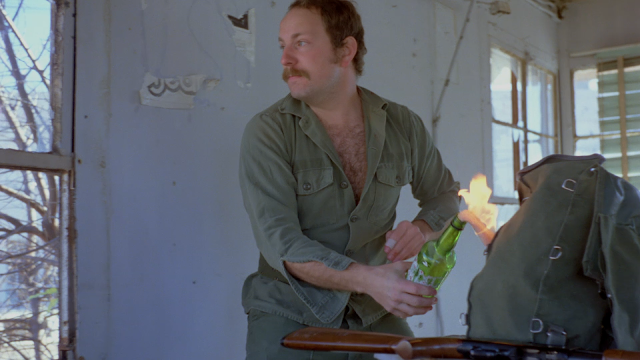 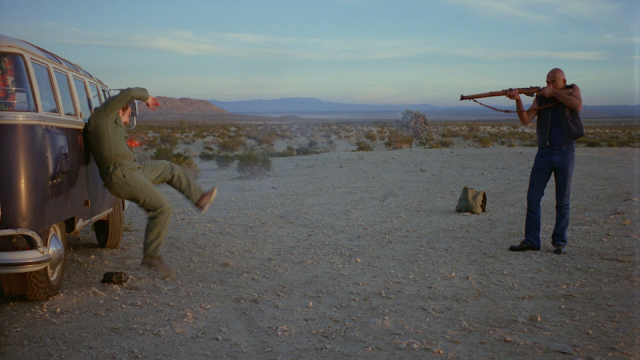