Where Does He Get All Those Wonderful Toys? Batman (1989) 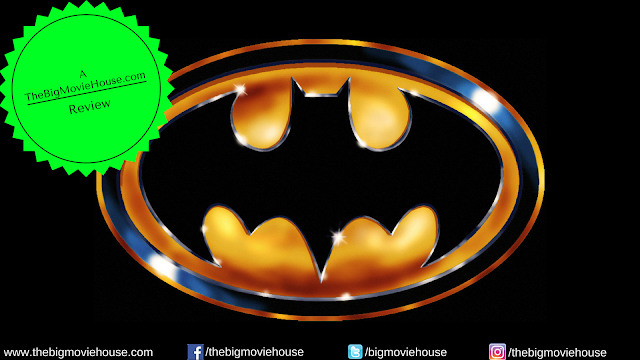 Does Tim Burton's film stand the test of time or does it feel like it is "of its time"?

I have just bought the Batman Anthology 1989-1997 on blu-ray, so I decided to give them all a spin. Now, before any of you jump on me for my comments about these movies, let me give you some background.

I was one of the first kids on my block to see the 1989 Batman when it came out. Of course, everyone was excited about this movie as it was the first true Batman movie to hit the big screen. (There was a movie based on that crappy series from the 60's, but notice that I used the word "true".) This was it. This was the movie that die-hard Batman fans had been waiting for, and at the time, it did not disappoint.

Batman was the biggest hit of 1989 and drove merchandise sales of Star Wars proportions. The movie was a huge hit when it hit VHS and is still remembered to this day as the movie that paved the way for "real" comic book adaptations.

So how does the movie fare today? Not so well. Hollywood has given us a lot of comic book movies, so the bar has been set pretty high. Now I am not judging the movie based on the Nolan Batman movies. Those movies are in a league all their own, much like the like four "original" Batman movies are their own league. I am judging these Batman movies on how they play today.

I know that you can not look at these movies without thinking of the Nolan ones, but try for a minute. It's hard, but I know you can do it.

See, that wasn't that hard. The original Batman is a movie of its time. Some movies are timeless, others fit in the period in which they were made. Batman falls into that category. The movie has a dark tone, but not too dark. Back then the studios were afraid of scaring away the kids, which are the bread and butter for a movie like this. So they made the tone what I like to call "dark light". Kids cannot relate to a superhero who is troubled.

Next, we have the Joker. Back in 1989, Jack Nicholson's Joker was just the right mix of menacing and funny. Today, however, the performance plays along the lines of the Sid Ceaser version from the 60's tv show. The Joker here is just not that menacing anymore.

When The Dark Knight was announced, the message boards and forums were littered with the questions about how Heath Ledger's Joker would stand up against Nicholson's. The answer to this question is: they are two different beasts. Whereas Nicholson's Joker paved the way for other comic book-to-movie villains, Ledger's Joker was a new type of villain. His Joker seemed to have no plan of action other than pitting the citizens of Gotham against each other. Nicholson's Joker had a clear-cut plan: to fuck up as much shit as he could and destroy Batman.

But, I am not here to compare the two. I am here to talk about Batman. Tim Burton chose Michael Keaton as Bruce Wayne and the choice is a pretty good one. Keaton brings a humanity to Batman. He also brings a quiet reserve. He has to struggle to stay human while being a "supernatural" force to the criminals of Gotham. Keaton does a good job here.

The problem that I have with the movie is that everything seems to be done with a lack of imagination when it comes to the storytelling. Sure the production values are top notch, but everything else is pretty straightforward. There is no sense of urgency. The Joker is messing with chemicals in order to kill the citizen of Gotham, yet Bruce Wayne/ Batman figures out what is going on with ease. He seems to know what the Joker is up to with very little help, even from Alfred.

Also, the action scenes do not age well. Hollywood has always been about slow and lumbering when it comes to the action scenes that they produce. Every fight scene here reeks of the actors counting the order in which the fists and kicks are supposed to go. There is nothing fluid about these fight scenes, it's just the actors, or more likely their stuntmen, going through the motions.

I guess you can chalk up my complaints to this movie being an 80's movie, where bigger was better. I kinda like Batman, but as the years have gone on I have liked the movie less and less. The movie was a big deal when it was released, but time has not been good to this caped crusader.