Do It, Then Die: Electric Boogaloo: The Wild Untold Story of Cannon Films Blu-ray Review + Screenshots 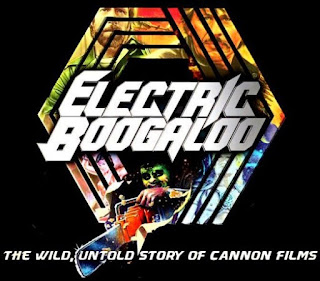 Electric Boogaloo: The Wild, Untold Story of Cannon Films is a wonderful documentary that dives deep into the production company that brought us some of the best, and worst films, of the 80's. The film moves at a breakneck speed that almost requires multiple viewings just to gain every bit of knowledge the film throws at you. There are plenty of wild and crazy stories that are even worse than you think they are.

NOTE: Electric Boogaloo comes on the same disc as Machete Maidens Unleashed, which I reviewed a few days ago. That review can be found here. 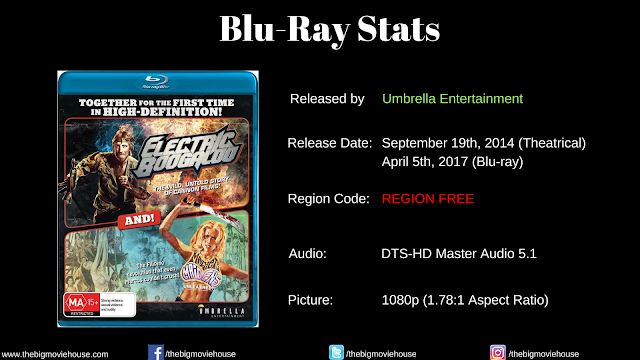 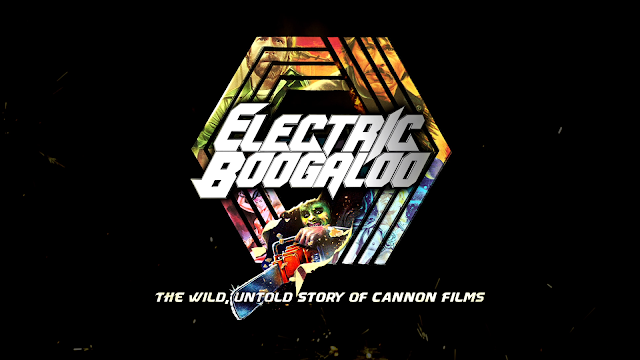 We get a nice selection of scenes here including some about films that I thought that they overlooked:

Dudikoff come off as a really nice guy and his love for working with Cannon Films is very evident. He says that if he could have made films with Cannon for the rest of his life, he would. Cannon was good to Dudikoff.

In the feature doc, Yablans is not ashamed to speak out against Cannon Films. He felt that the films they were sending him were shit and as soon as their deal was through, he cut ties with the company. He didn't like any of the films that they made and felt that they were thieves in their taking of money for films that never existed and lining their own pockets with said money.

Mark Hartley, director of the Electric Boogaloo, as well as Robin Sherwood, from Death Wish II, and Richard Kraft, Cannon's Music Supervisor are all interviewed on the red carpet leading into the premiere of Electric Boogaloo. Nothing new is talked about here.

Ratner produced Electric Boogaloo through his RatPac Pictures and he was very instrumental in getting MGM to license out the footage that was needed for the film. Hartley also talks about how the project came together and the reception of it so far.

More of the same stories that we have been hearing all throughout this disc.

Music plays as the posters movie by at a faster than usual speed.

Like with Machete Maidens, this trailer is the only other feature on Electric Boogaloo that is in HD.

Electric Boogaloo arrives on blu-ray accompanied by Mark Hartley's 2010 documentary, Machete Maidens, so this section will be the same in each review. 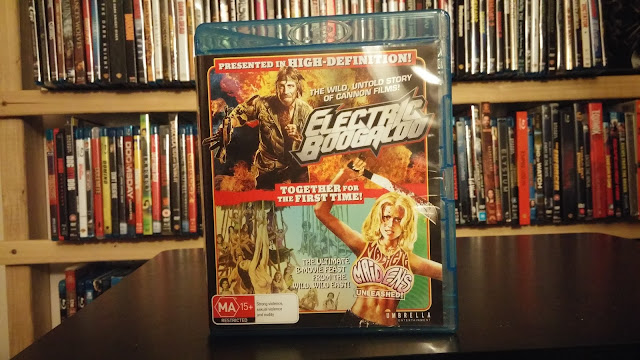 The front cover gives us some art from both films, split down the middle, announcing that the films are "Together For the First Time." 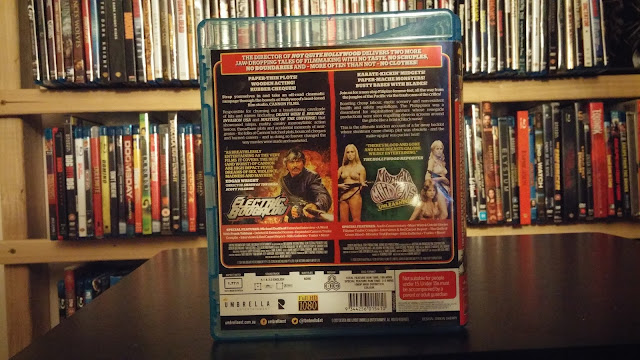 The back cover give us info about the films, special features, and tech specs. 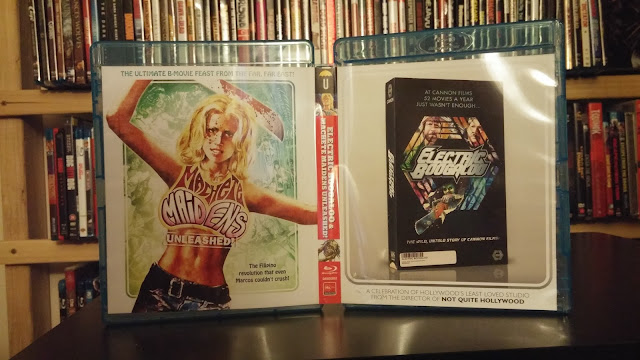 The reverse cover gives us the theatrical posters for both films, with each one taking up a side. 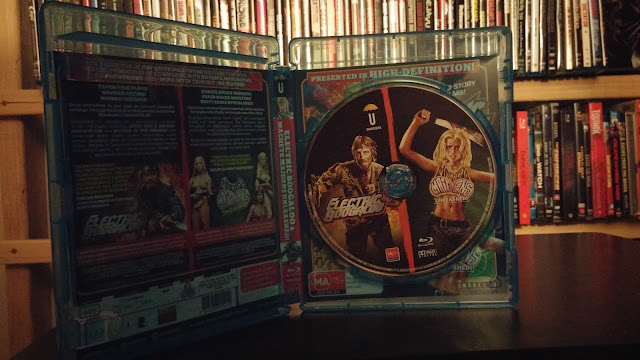 The disc art is very close to being the same as the front cover art, just with a focus on one thing for each film. Electric Boogaloo has Chuck Norris and Machete Maidens has the girl wielding a machete with the title of the film on her chest. 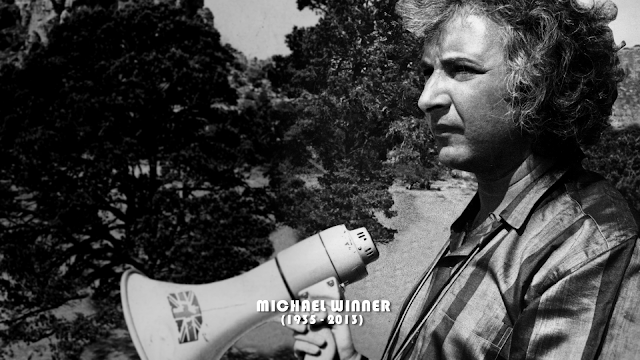 Electric Boogaloo is comprised of new interview footage mixed with older film footage. Unlike Machete Maidens, though, the film footage here looks really good and mixes very well with the interview footage. There is some footage that was captured 8mm film that looks a bit rough, but everything else looks great. 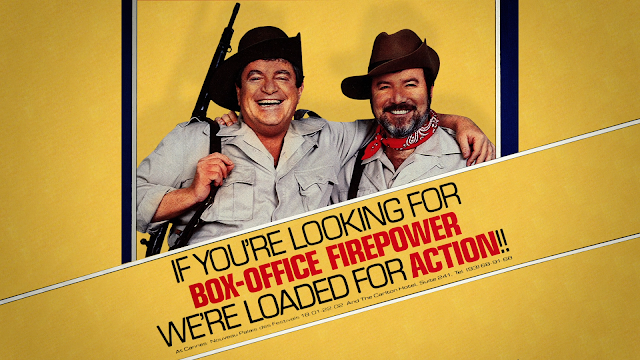 Unlike Machete Maidens, Electric Boogaloo gets a lossless track, and a 5.1 track at that. This is a much more active film in terms of sound, so the 5.1 was a good choice to go with. While the surrounds don't get a good workout (this is a documentary afterall), they do get to play and add a nice level of surround. The dialogue, which this film is mostly comprised of, sounds great and is easy to listen to. This is a really good track. 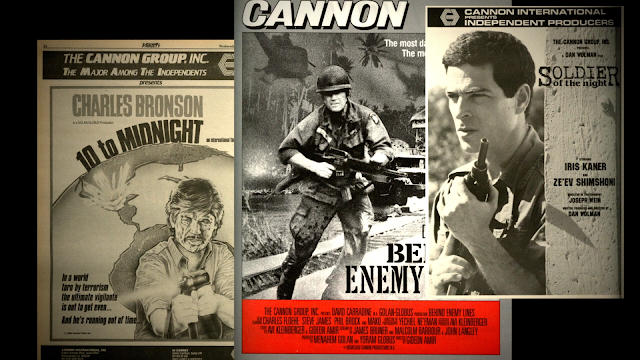 A documentary about Menahem Golan and Yoram Globus - two movie-obsessed cousins whose passion for cinema changed the way movies were made and marketed - and the tale of how this passion ultimately led to the demise of the company they built together.


I am a child of the 80's and grew up with many of the things that younger people are now feeling nostalgic for (which I don't understand, but maybe I am not supposed to). One of those things was the library of films that Cannon Films released all throughout the 80's. There were a few different logos that I knew very well, like the Trimark logo, the Vestron logo, Empire Pictures logo, and the Cannon Films logo. When the two halves of the logo met in the middle right before a film that I was watching, I knew that I was in for something special.

The films that Cannon Films released were a mixed bag, with some being just awful, like Going Bananas, and the later American Ninja series, while a lot of the other films they released were great, Enter the Ninja, Death Wish 3, and the Breakin' films. Cannon was one of the companies that defined the 80's for me and gave me the films that I wanted to watch.

Mark Hartley, director of Not Quite Hollywood and Machete Maidens, has given us what I consider his best film to date. The film takes a look at Golan and Globus before they came to America, all the way through to the warring Lambata films the pair had when they split up at the end of the 80's, and gives us an account on how Cannon Films stayed in business for so long, when their films really weren't making that much money. For all intents and purposes, Cannon Films was a lot like Blumhouse is today: Take a small film, give the film a small budget, let the filmmaker have creative freedom, and reap the benefits from the film having a low budget. Of course Blumhouse focuses on a few films a year, but the models are very similar.

Cannon began to fall apart when they took their low cost yield high returns method and started focusing on higher budgeted films. Golan and Globus wanted to play with the big dogs, so they hired a lot of famous stars and directors and gave them carte blanche, leading to massive money loss. Tobe Hooper, director of The Texas Chain Saw Massacre, was given almost $25 million dollars, a budget that Tobe Hooper had never seen nor would see again, to make the space vampire epic, Lifeforce. The film lost Cannon a ton of money, but Hooper was allowed to make the film that he wanted, until Golan wanted the film cut down for American audiences. The U.S. theatrical version is awful, while the international director's cut is great.

Hartley captures all of the stories and edits them like he is telling the story at a high speed. This is a film that has to be watched twice just to get all of the information that whizzes past us. We come to find that Golan just wanted to make films and his passion is seen in the film. Golan, however, thought that stars meant box office, but he soon learned that it isn't always the case. As the budgets went up on the films, Golan and Globus couldn't do it anymore. Golan left the company while Globus stayed on. This part of the story is not really talked about in the film. I wish they had because I think that it would have capped off an amazing story. Instead, Hartley decided to cap the film with the warring Lambata films. While this is a good way to end the film, it just shows how clueless these two were with "crazes".

The one thing that I took away from the film, among many things, was that Golan loved film. This was a guy who ran an exploitation film company, but also hired people like John Cassavetes and  Franco Zeffirelli to direct films that would be considered arthouse films. Golan wanted to work with the best directors and he did. Cannon Films truly had one foot in the gutter and the other in the arthouse scene. Never before, nor since has a company made such drastically different films without putting the kind of film they aren't used to making under a new label, just to make it look like they are still making the films they are known for. Hell, the Weinsteins had to create different companies to release the films Kids and Dogma. Just goes to show that people do pay attention.

Golan was also loved by many of the people who worked for Cannon Films. Zeffirelli talks with great passion in the film about how Cannon was the best company he ever worked for and stills loves them to this day. There are many of do impressions of Golan, but they are not mean-spirited, they come from a place of love and respect. Golan and Globus may not have been able to manage money very well, but they did have a lot of people who loved working for them and even more that respected what they were trying to do.

Electric Boogaloo is a wonderful film. Hartley was able to capture the spirit and feel of the 80's and shows that he can tackle any subject matter. The film is filled with the types of stories that we want to hear, from the people who were there. I know more about Cannon Films now than I ever did before and a better man because of that. 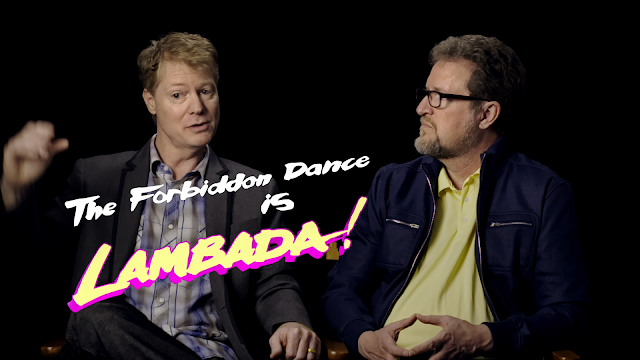 THE FILM9
THE PICTURE9
THE SOUND8
THE FEATURES7.5
THE PACKAGING8

Electric Boogaloo: The Wild Untold Story of Cannon Films is a great documentary that sheds some light on one of the most notorious production companies in recent memories. Everyone out there has their favorite Cannon film and the film probably covers it.

The blu-ray, from Umbrella Entertainment, is really good. The video and audio quality are top notch and this disc is loaded with special features. The only downside is that none of the special features, save for the films' respective trailers, are in HD, when most of the footage and trailers would have been in HD. I know that it is a space issue, but it would have been nice.

Still, this is a nice release that fans will love.
8.5
Overall Score 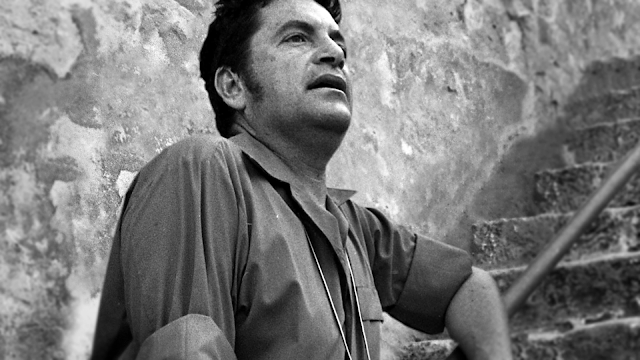 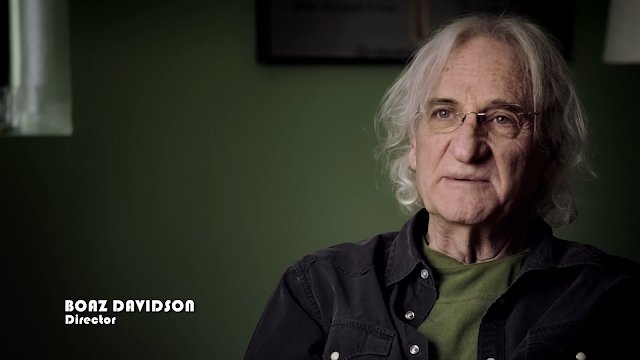 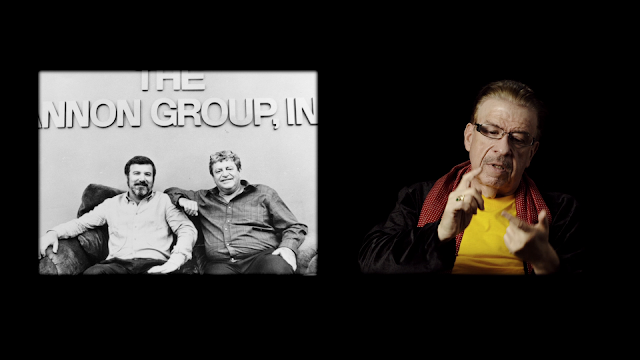 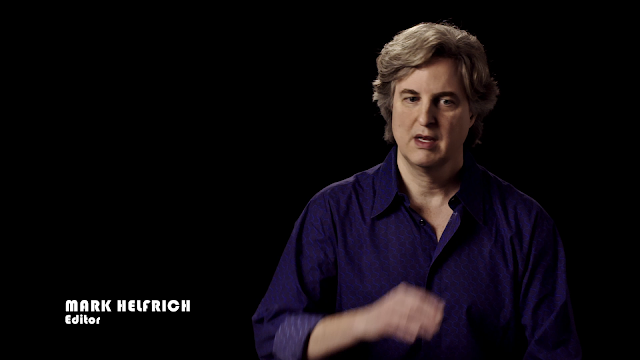 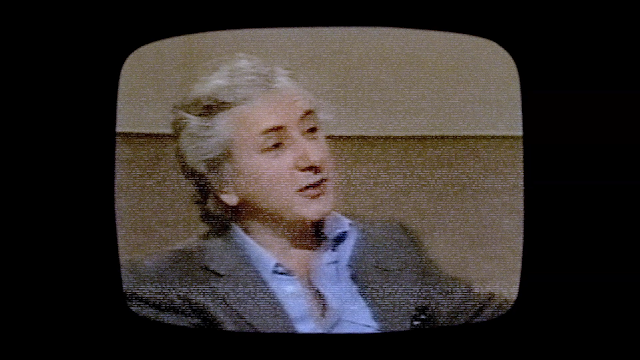 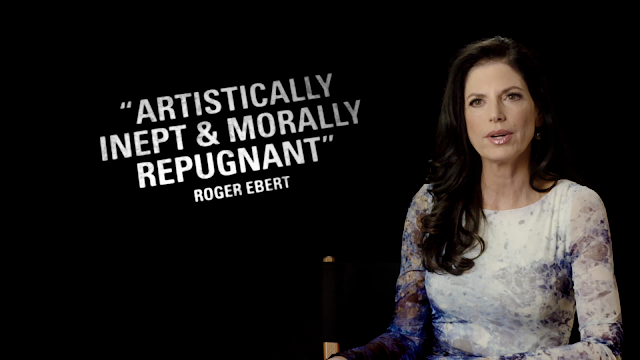 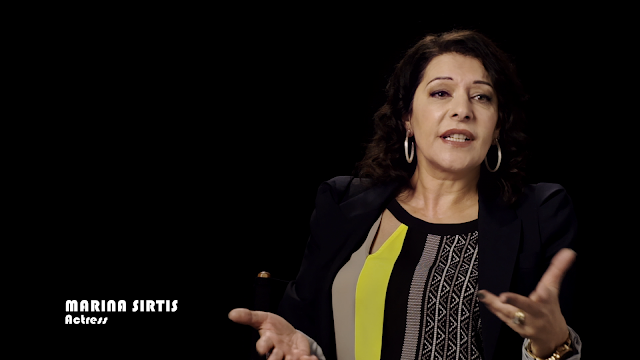 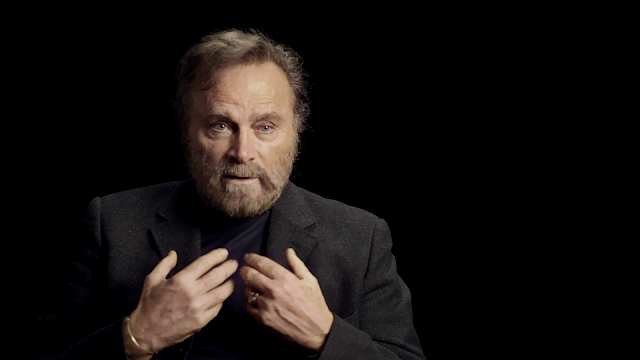 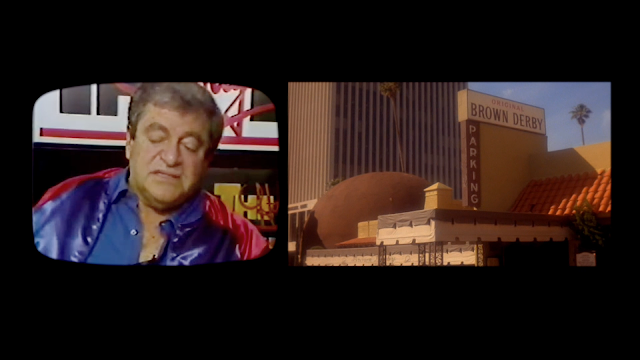 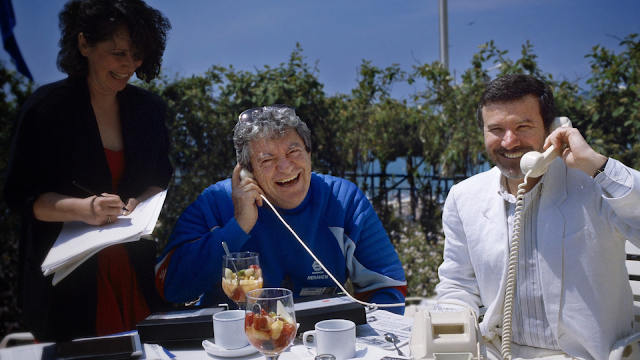 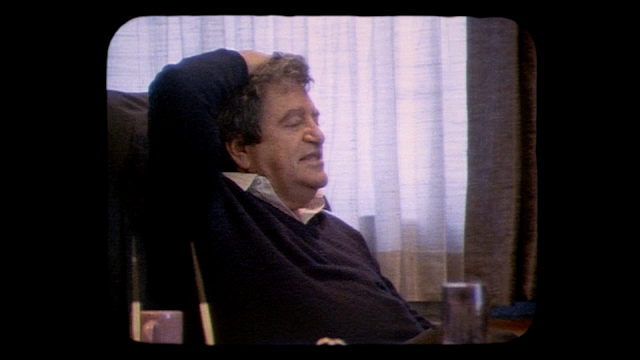 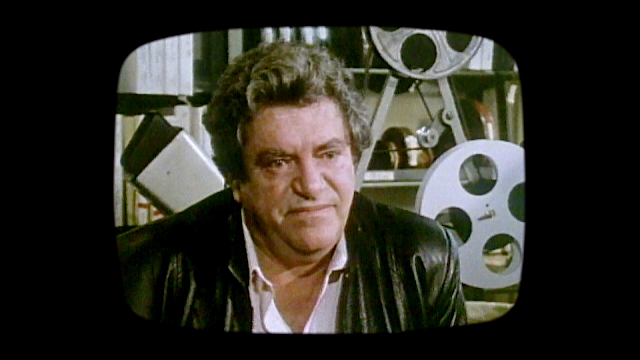 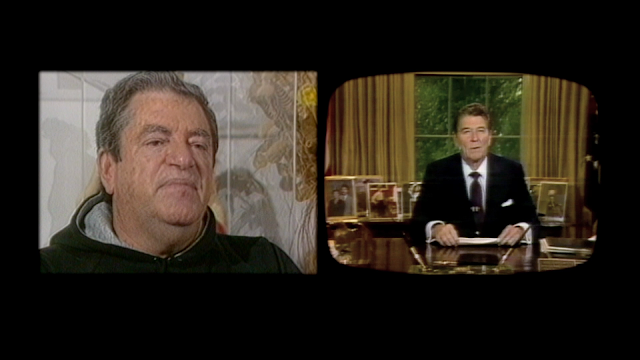 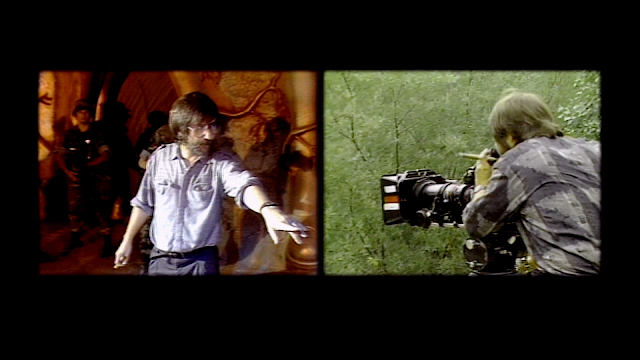 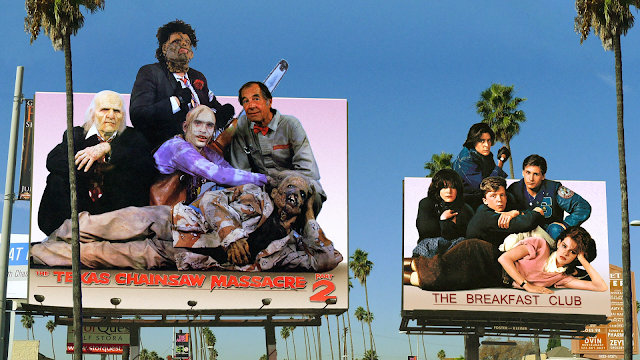 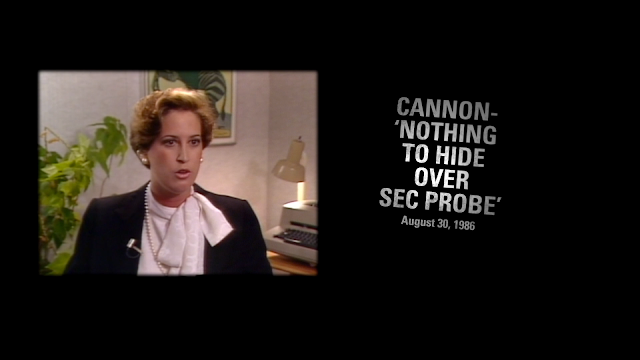 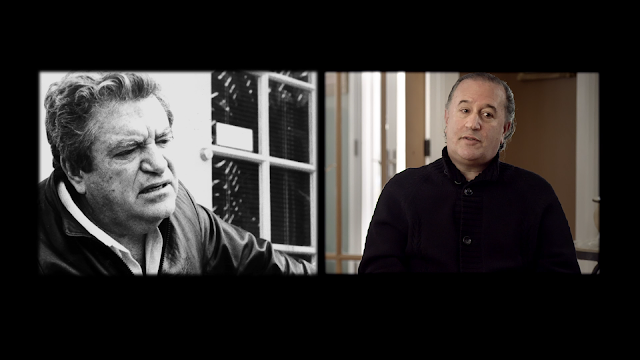