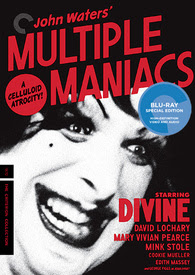 Criterion announced their March 2017 line up and John Waters' cult film Multiple Maniacs is among those announced. I have never seen Multiple Maniacs, but I can tell you that I will be the first in line to get it. The special features sound a little bit on the light side, but it does say "and more" so there could be something else that they don't want to announce, you know, just in case.

John Waters has always been a favorite of mine. The first of his films that I saw was Crybaby when it came to VHS some time in 1991 or 1992. I remember hearing about how his films were "weird" and "strange" and that he did anything to "gross you out." My mother wouldn't let me rent his earlier work, but she let me see Crybaby because it was PG-13 (not that my parents cared about ratings) and Johnny Depp was in it (She was a 21 Jump Street fan).

When I got home and watched the film, I sat looking at the tv, thinking "That's it?". This guy was supposed to be a filmmaker's version of the devil and I just watched a film that had very little cursing and no nudity to speak of. I didn't see any violence either. It wouldn't be until 1997 and the rerelease of his most famous films. That is for a later story though.

Jimmy P is an avid film lover and tries to get out to the theater as much as possible. He is also a collector of DVDs and Blu-rays. Jimmy P lives with his wife in Parts Unknown.

You can reach Jimmy P with any questions or comments through email, thebigmoviehouse@hotmail.com, Facebook, twitter.com/jimmyp0504, or commenting on any post.
Announcement Blu-ray John Waters