No Retreat, No Surrender Coming to Blu-ray this Fall 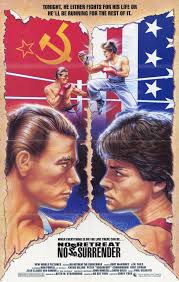 Kino Lorber, who has been doing some really good work lately after a rocky start, has announced that they will be releasing 1986's cult classic No Retreat, No Surrender on blu-ray this fall.

The film is well known for being the first Jean-Claude Van Damme feature film, although I have heard that he shows up at the beginning and at the end. Nonetheless, the film has garnered a cult following and also introduced the U.S. to Corey Yuen, who would be reintroduced a decade later when he worked with Jet Li on Romeo Must Die and Lethal Weapon 4.

While specs and features haven't been finalized, we do know that the blu-ray will include 2 versions of the film: the American version and the international version. There will also be an interview with with star Kurt McKenny.

This is great news. I have never seen No Retreat and have always wanted to. I ran across the VHS in my local video store when I was a kid and wanted to rent it but never got the chance to. I don't think that there was an American dvd release, or there was and it was a fullscreen release, which I would have stayed away from. I am a pretty big Van Damme fan and have always regretted not renting this.

Kino has been doing a bang up job lately. They gave us Enter the Ninja and Revenge of the Ninja last year and they are releasing American Ninja 1-4 on blu-ray in August.