From the "This Should Have Been Great" Files: Troma's War (Troma) Blu-ray Review + Screenshots

Troma's War is not the masterpiece that many say it is as it suffers from being the most un-Troma Troma film ever. The effects and make-up are really good, but at the end of the day this is just another generic action film just like the ones Hollywood spits out every year. 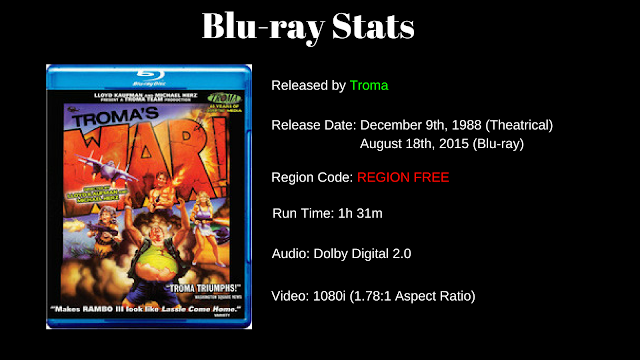 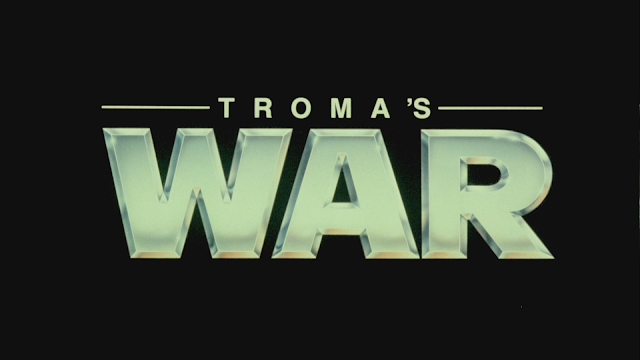 This is a wonderful piece that goes into the making of Troma's War while still staying tongue in cheek. This is the real Michael Herz, not Joe Fleishaker who would usually don the moniker of Herz. Herz has always stayed behind the scenes letting Kaufman do his thing to sell the films and the company. It is nice to see the two men together, clearly enjoying each others' company while telling some very true and in depth of the making of Troma's War.

Kaufman sits solo for this commentary track that goes in deeper than the previous feature did. Here Kaufman talks about the tough shoot, the strike that the cast and crew went on due to not having hot meals on set, and the hiring of Joe Fleishaker. Kaufman isn't trying to sell Troma here. He is giving insights and analysis about the filmmaking process. This is a very good track that suffers a bit from gaps of silence.

This is a very short piece of commentary from the film's director of photography. I don't know why this is included because there is really nothing here of substance.

This is the original dvd introduction that played before the film. Here Kaufman is his usual public persona, introducing the film while giving the shortest of interviews with three cast members: Sean Clark, Jessica Dublin, and Joe Fleishaker.

Pericles Lewnes, who did the effects for Troma's War, pays a visit to the late Joe Fleishaker, who was practically immobile due to his weight. Fleishaker tells some really good stories about working on Troma's War and you can tell that he loved being in each film. It is a shame that he died as his presence will be surely missed in Troma films to come. 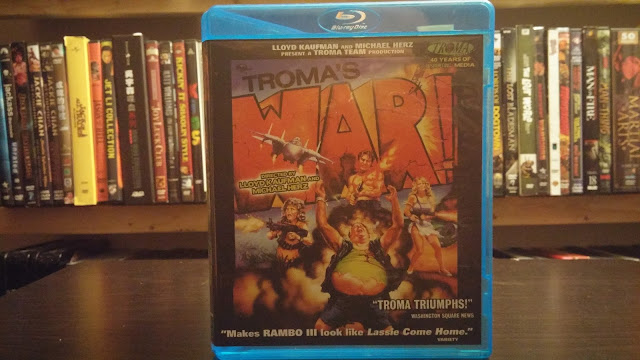 The front cover features the title of the film, four characters from the film, including one who is one his knees with his arms in the air like Willem Defoe from Platoon, and a couple of quotes about the film. There is also a fighter jet that is never seen in the film. 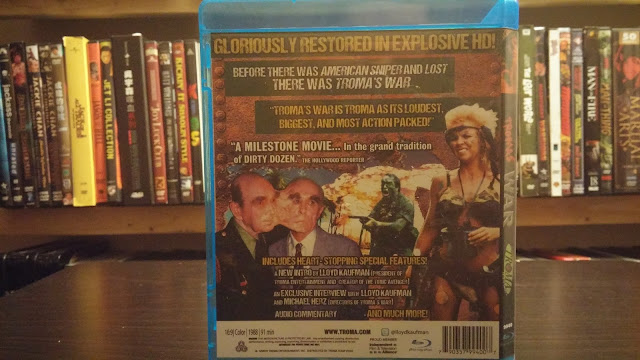 The back cover is a mess. There is no rhyme or reason to how this thing is layed out. There are multiple lines of text that are attributed to no one and the photos seemed to be chosen at random. The only part of the back cover that has a structure is the very bottom where all the legalese is. 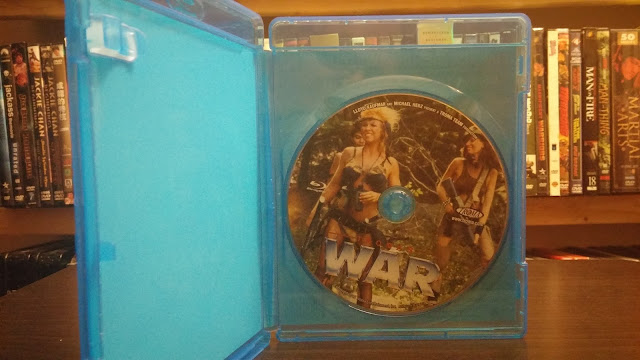 The disc art is just a shot from the film that has been cropped to fit the disc.

The case is a non-eco friendly case which was a shock to me as I figured that Troma would have gone that way, but they didn't and we are happier for it.


I had read some reviews for this disc before I got it and there was nothing but bad things to be said about this film's transfer. I was a bit put off from purchasing it because I had never seen the film before and the reviews gave the PQ very low ratings. I chose to purchase the film because I would love to be able to have all of the in-house Troma produced films on blu-ray.

To my surprise, when I watched the film, I noticed what the other reviewers were talking about. The film, at times looks awful, especially in smoky scenes. Compression artifacts are all over the place in some scenes and there is a lot of microblocking when a lot of movement is happening onscreen. This is also a "warts and all" transfer which means that Troma has done nothing to clean up the print used for the transfer.

The good news is that this transfer isn't all bad. There are some close-ups that show a decent amount of detail and the colors fit the film just fine. There are also shots where depth is halfway decent and there is no digital manipulation like DNR to be found. 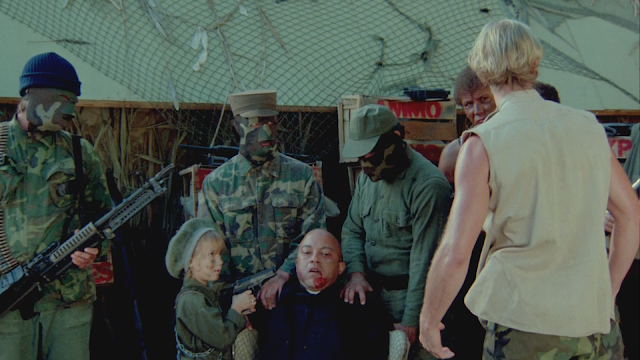 Troma still has refuses to give us a lossless track, but this one suffers the most. Several times throughout the film I could hear popping and hissing on the track. Dialogue doesn't suffer, thankfully, but when the action kicks in, it becomes something akin to noise pollution, with the track becoming overwhelmed by what is happening on screen. This is not the worst track I have heard, but I wish that Troma had at least listened to the track and fixing a few of the problems before shipping it out to consumers. 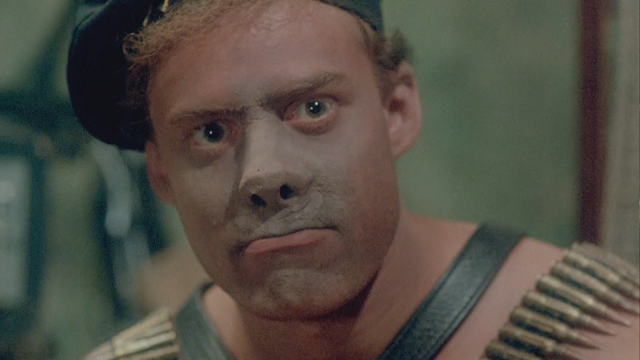 A small group of typical Tromaville citizens find themselves in the path of a terrorist army controlled by the power elite. The freedom of Tromaville and the world is at stake! Troma's War creates new kinds of heroes. A used car salesman, a handsome environmentalist, an obese junk-food gourmand, a seventy-year-old housewife, some sensational young women, a year old jingoistic baby and more sensational women all become deadly soldiers...


Troma's War has always been the film of Troma's that I had never seen. I don't know why, but every time I would have a chance to watch the film, I would choose to watch something else. I have owned this film on dvd for what seems like forever, but I never got around to watching it.

Two days ago I got bored and decided that now was the time to finally watch the film that many consider to be Troma's masterpiece.

After watching the film, I can tell you that this is far from Troma's masterpiece.

The film is a fairly standard action flick that would find its home on video store shelves in the late 80's and early 90's. If you were to take out the Troma stuff (the siamese twins that are attached at the face, the AIDS brigade, and some of the gore effects) this is a straight to video flick. The stuff that Troma added feels a bit out of place in a sense because you can tell that it was added much later. Kaufman confirms this on the commentary track, saying that the original screenwriter wrote a straightforward war film and that he quit when Troma added all of the Troma stuff to the script.

The film also is not very funny. Troma is known for making comedies and this film has very little in the way of laughs. I found it very uncomfortable to watch two rape scenes back to back and then have the film move on like nothing happened. The two victims also don't exhibit any kind of trauma. They get back to the action after the attacks.

Troma's War is a very disappointing film. The film seems confused as to what it wants to be which leaves the audience scratching their heads. The film should have gone in the opposite direction that it did and make a biting satire on war and action films. There is some satire with the AIDS brigade and whatnot, but it is surrounded by the most un-Troma Troma film ever made. 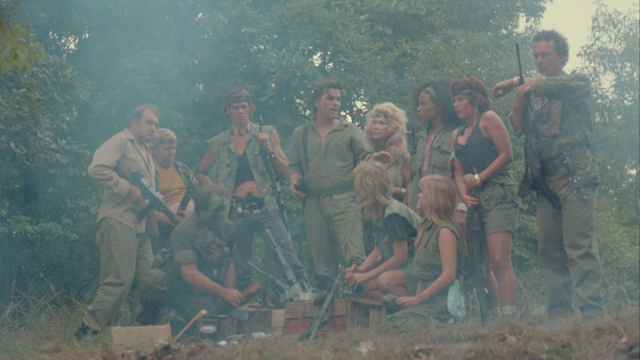 Troma's War is not a good film. It doesn't try hard enough to be different and the film suffers because of that. Troma would have been better off making a sequel to The Toxic Avenger (which they did after this film) or taking this film in a different direction. There is very little here that makes it a Troma film and that saddens me. This could have been a great Troma film, but something happened along the way and we got a standard action film with some Troma flair.

The blu-ray is also not that great and I guess it fits the film very well. The A/V quality is decent to say the least, but the disc is almost saved by some of the special features. The commentary track is pretty good and the interview between Kaufman and Herz is terrific. This blu-ray also sports one of the worst front and back covers I have ever seen. If you own the other Troma films on blu-ray or are a big fan of Troma, then I would say buy it, but wait for a good sale.

THE SCREENSHOTS BELOW MAY CONTAIN SPOILERS!! 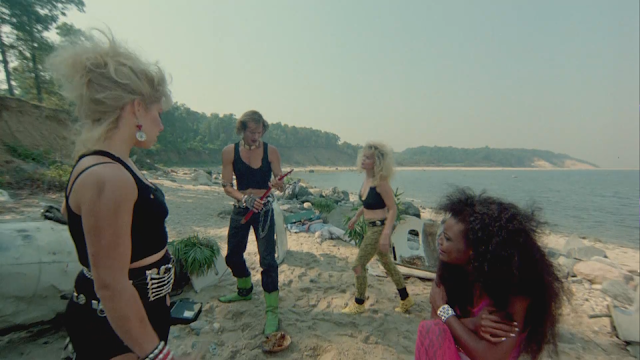 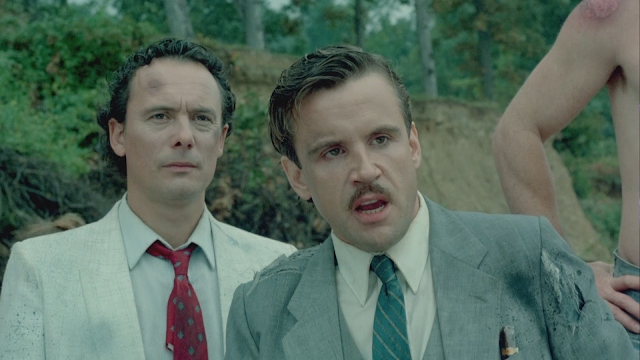 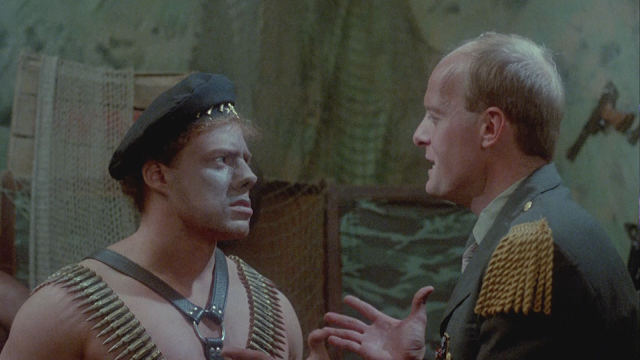 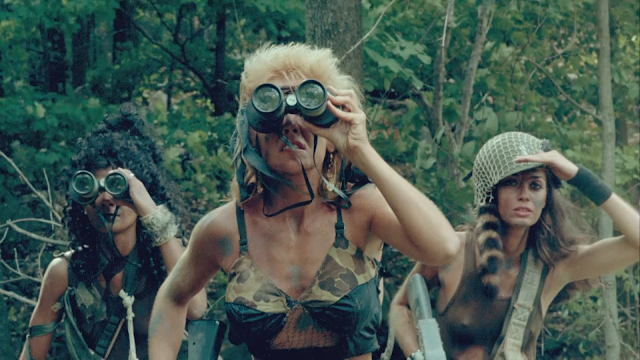 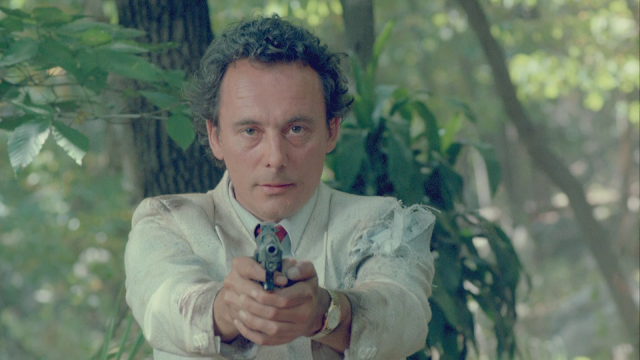 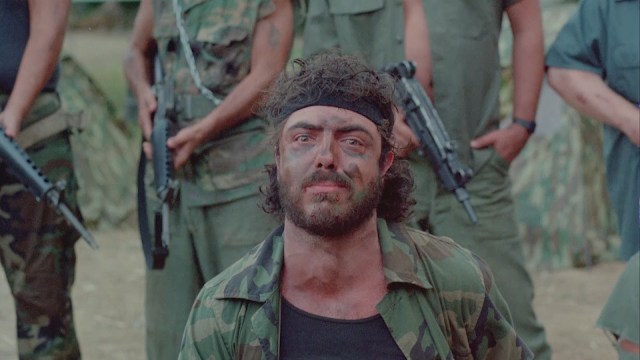 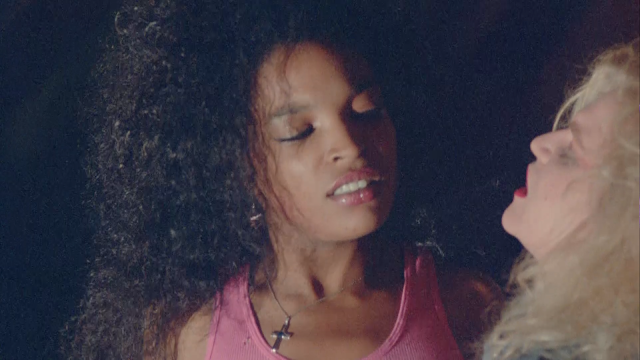 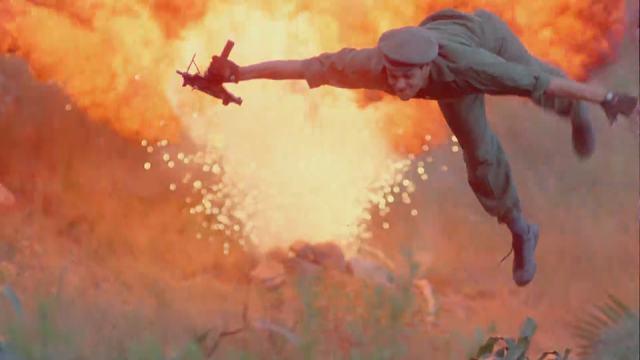 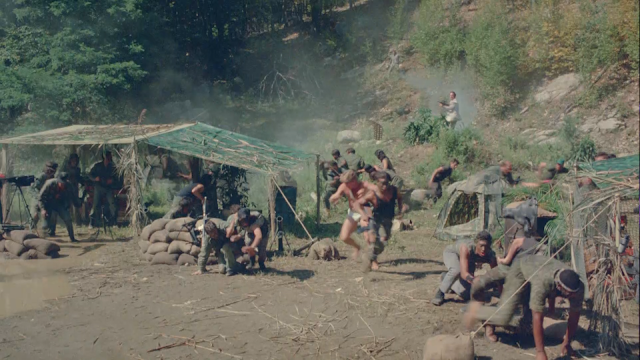 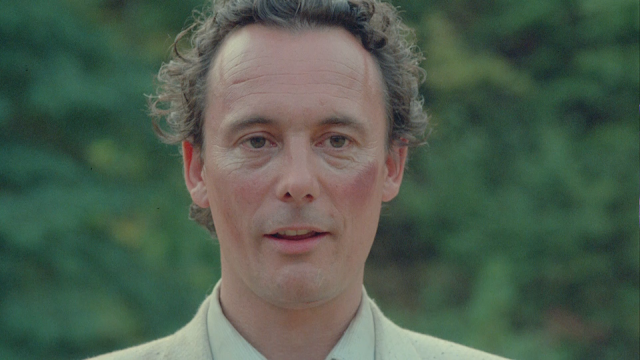 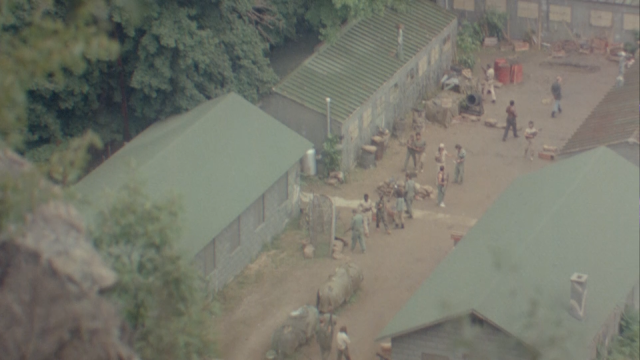 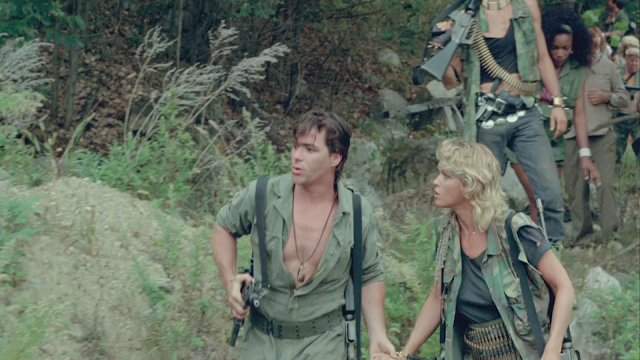 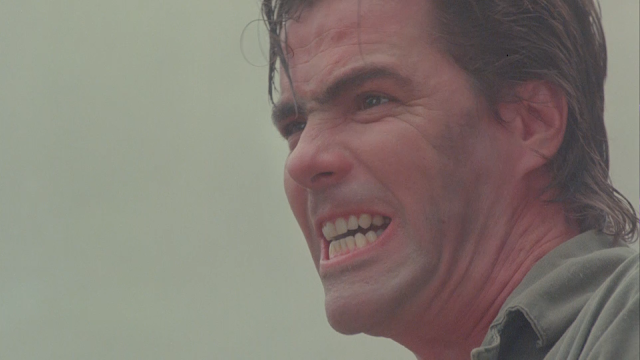 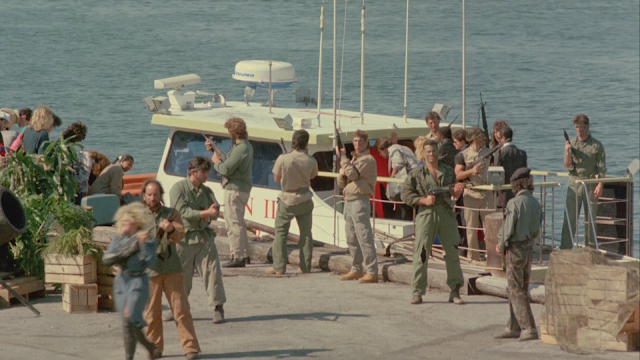 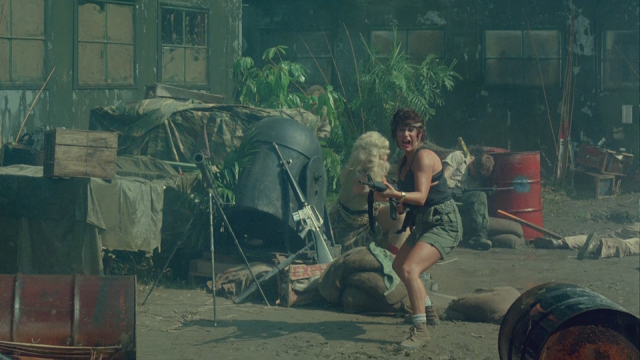 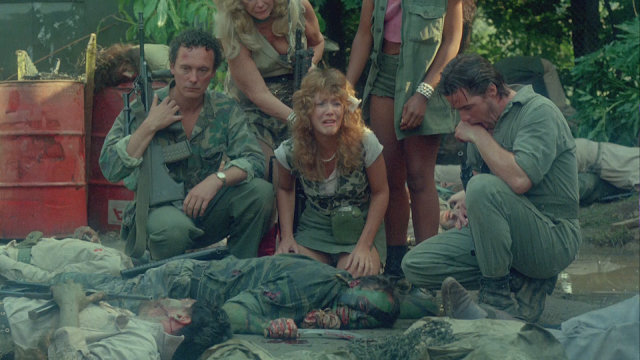 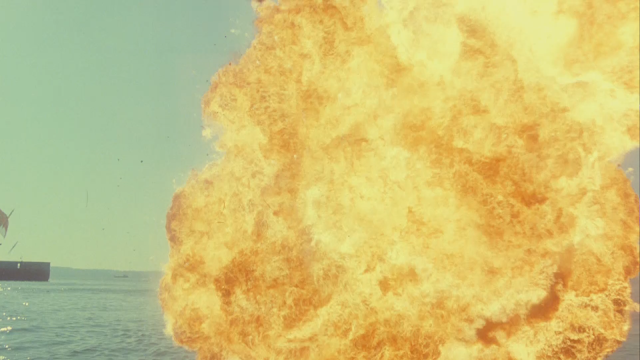