The Man From Hong Kong Coming To Blu-ray!!!! 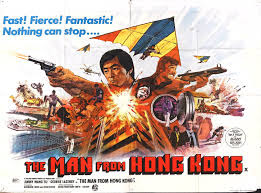 I am so excited to be talking about this. I woke up this morning not feeling very well. I watched a little tv and then I came into my office to do a little bit of research and writing when I happened upon this article on Bloody Disgsusting where they were talking about The Man From Hong Kong, a 70's Ozploitation film directed by Brian Trenchard Smith, who gave us Stunt Rock, Dead End Drive-In, Night of the Demons 2, and Leprechaun 3 &4.

Most of Smith's films have made it to dvd and/or blu-ray in some fashion, but The Man From Hong Kong has been elusive. There was a release dvd release in 2002, but that was it. It seemed like the film had been forgotten about. 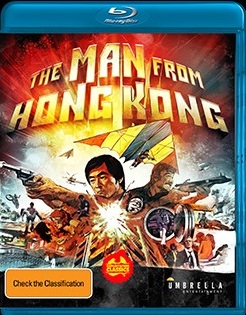 Not only are we getting the film on blu-ray, but they are giving us a feast of special features for us to devour:

-The Making Of THE MAN FROM HONG KONG

-Exclusive 24 page booklet featuring stills and a new discussion of THE MAN FROM HONG KONG by Brian Trenchard-Smith PLUS an excerpt from his new novel THE HEADSMAN'S DAUGHTER.

Now these are just the special features for the main film. Main film? Yes, main film, because Umbrella is giving us five more Brian Trenchard-Smith films in this release as well:

Keep in mind that the bonus films included here are in standard definition only, but when the films are a bonus the fact that they are not in HD is not a huge complaint. Also, this release is an Australian only release, usually that means that you would have to be region free or have a region B blu-ray player. This release, however, looks to be region free, as that is how it is listed on Umbrella's website.

You can order the blu-ray through Umbrella's website: https://www.umbrellaent.com.au/movies/2872-man-from-hong-kong-blu-ray.html and I am sure that other sites will be carrying it as well.