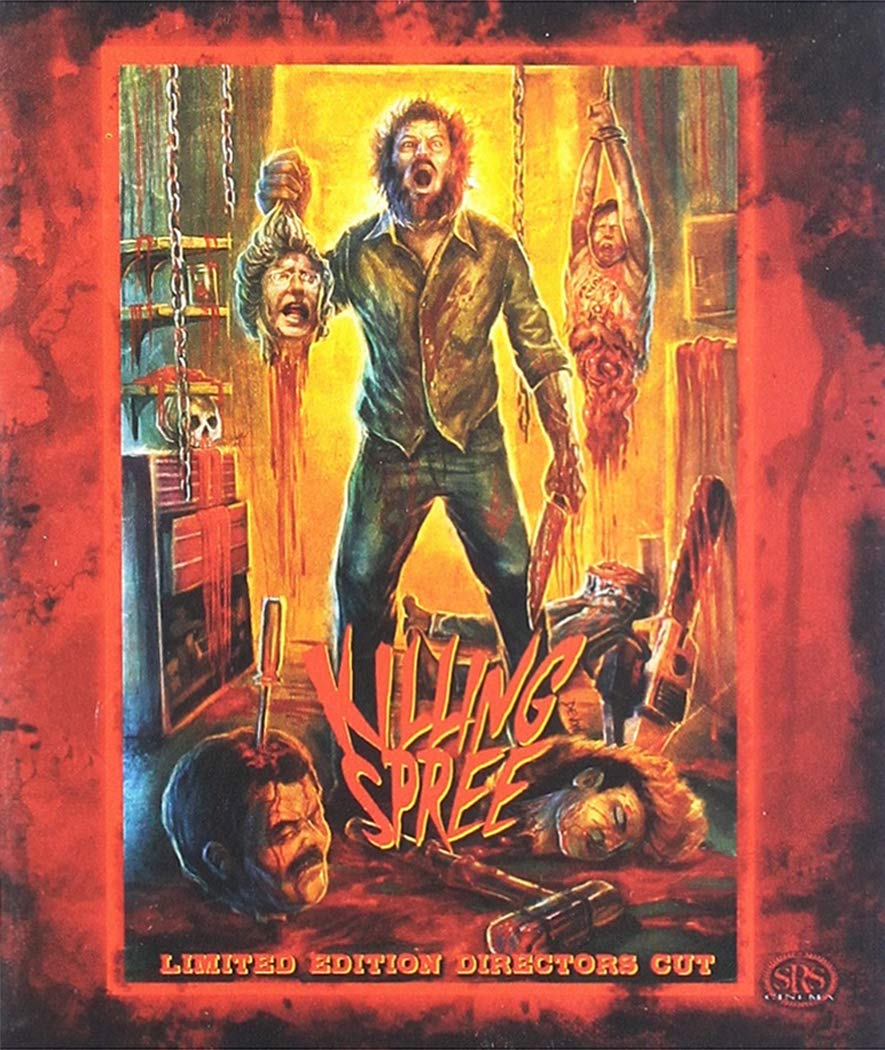 In our ever ending search for horror that we have never seen before, we came upon Killing Spree and we have to say that it met our fancy. Today, we take a look at the blu-ray from SRS Cinema and let you know what you may have been missing out on. 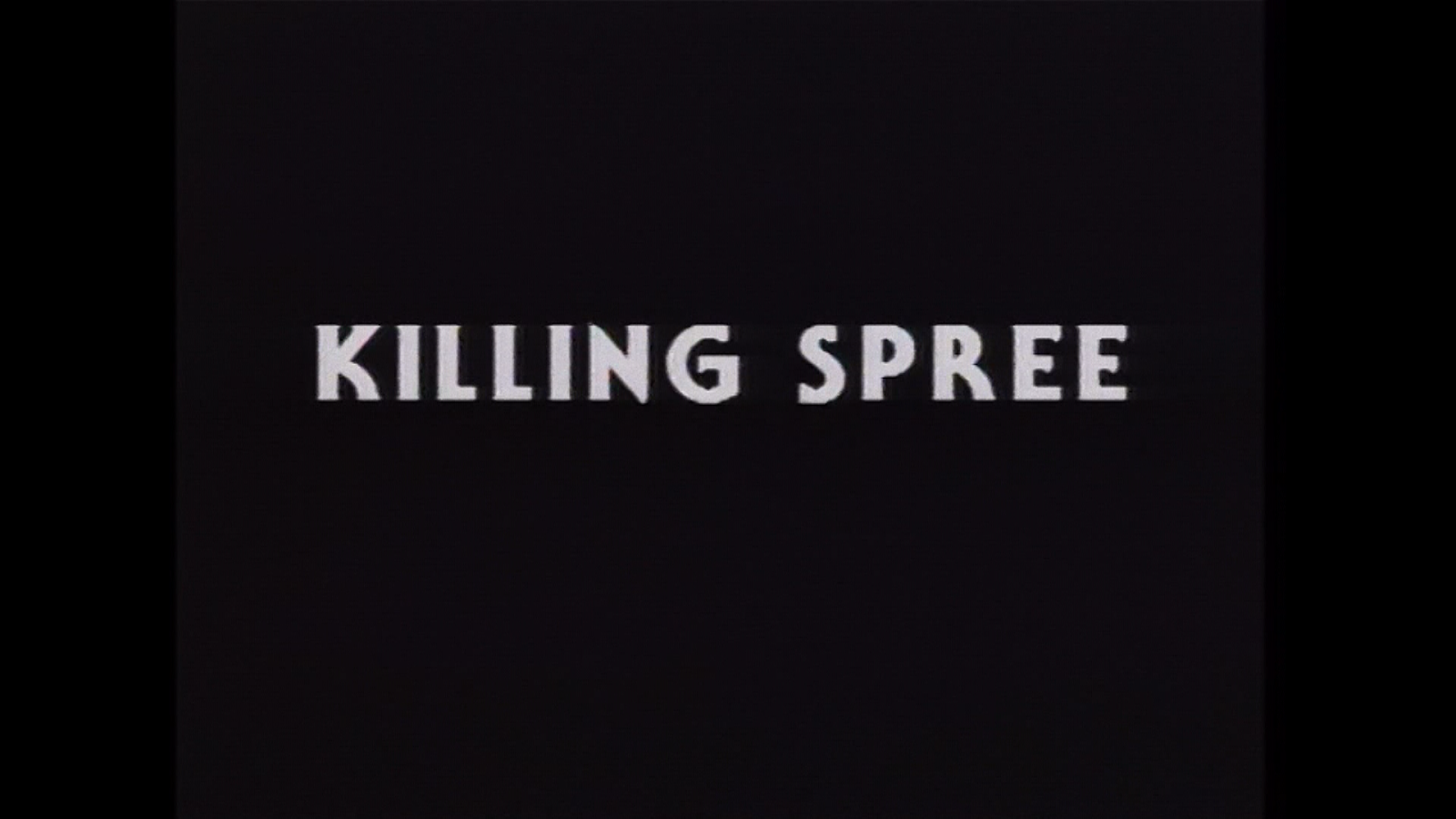 Tom feels that his wife is cheating on him. It doesn't take long for his paranoia to get the best of him and he begins to murder the men he thinks his wife is sleeping with. Tom has the most inventive and gruesome ways of dealing with these unfortunate chaps.


The 80’s were a high time for horror and for VHS. Horror hit an all time with the popularity of slasher films and video stores, which were booming, were looking for product. Horror rented especially well and people like David A. Prior and John Wintergate were among the many who answered that call. Prior and Wintergate would make two of the first “shot on video” movies that were big hits when they debuted on VHS.

KILLING SPREE was not “shot on video”, but it still has that go broke feel to it that many “shot on video” movies have. While director Tim Ritter could have followed the mold that the theatrical horror films were following, he decided to make his films their own beasts. His first film, DAY OF THE REAPER, was a sizable hit, so Ritter decided to make more.

KILLING SPREE is the fourth film that Ritter made and it is a gem of a film. It follows Tom Russo who is driven crazy by his wife’s diary, which contains her steamy exploits with the men in their area. Russo snaps and starts killing all the men mentioned in her diary in more gruesome and graphic ways. I mean, Russo attaches machetes to a ceiling fan, calls an electrician to come over and fix it, and when the guy shows up, Russo lifts him into the fan which takes the top of his head off. There are many more kills like this throughout the film, but I thought that this one was the craziest.

Watching KILLING SPREE, it becomes apparent that Ritter is a pretty good director. His shot composition is always interesting and the story never really goes where you think it’s going to go. I thought that once the spree started that it was going to be nonstop, but Russo kills one person, cleans up, and waits for his wife to get home. The film definitely has a weird pace to it, but I never thought that it was a bad thing. The film moves pretty fast even if it isn’t going the way you thought it would.

The acting, for the most part, is what you would expect from a film like this, but its the lead performance by Asbestos Felt that really helps sell the film. His performance is almost indescribable in that, like the film, you never know what you are going to get out of him. He laughs maniacally when he kills, but he also talks normally to his victims. I would compare this performance to a true Nicolas Cage performance. The performance draws you in and won’t let go until the film is over.

KILLING SPREE is not a film for everyone. I am sure that there were plenty of people who hated it when they found it in their local video store in the 80’s. The film is crass, sloppy, and gory as shit. But the film has a lot of charm to it and we can appreciate what Ritter and company pulled off here. I had a blast watching the film and I am sure that there are plenty of people out there who feel the same. 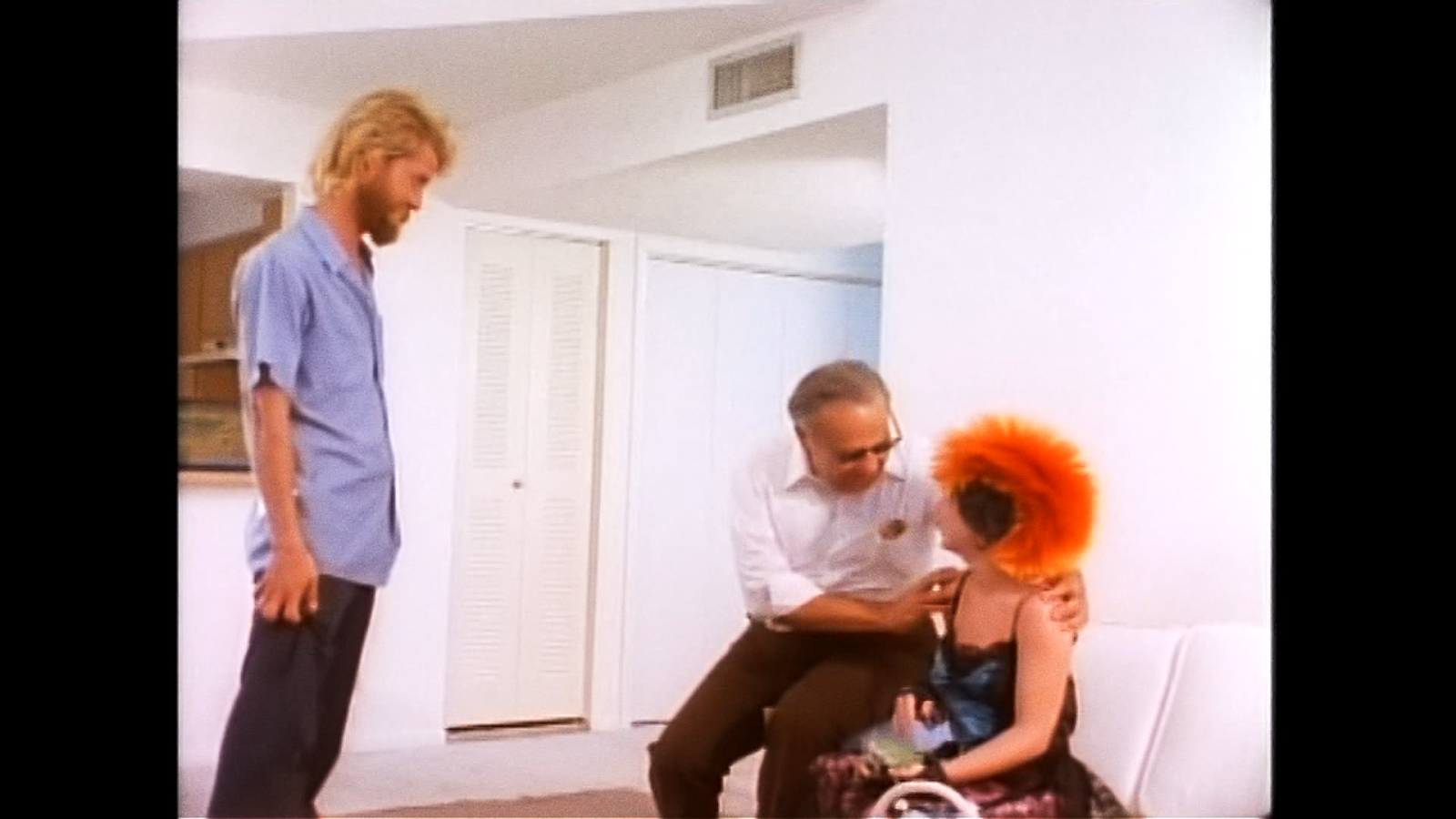 While KILLER SPREE was shot on 16mm, this release is an upscaled standard definition picture. While it would have been nice to have an HD presentation (the film resources are gone so there is no chance of that happening.), the picture doesn’t look too bad. Everything that you would expect from an upscale is here: softness to the picture, colors not popping, very little in the way of detail. This, however, fits the film just fine. It has a shot on video feel to it and I think that anyone looking at getting this release would be just fine with that.

The Original Cut fares far worse than the Director’s Cut, which is the main feature. Colors are not vivid at all and there are some really bad banding issues. Basically, it looks like a copy of a copy. Thankfully, this is not the main feature, but I still wanted to bring this up.

The sound is lossy and sounds like it was shot on set with a camcorder mic. This, again, really isn’t a problem as this is what you would come to expect from DIY horror.


Commentary Track: Director Tim Ritter is onhand to give one of the most informative commentary tracks of recent memory. Ritter has been working in the industry since the early 80’s and he brings all his knowledge to the track along with all the stories he can pack in between. He talks about the trials of making a no budget film, the problems on and off the set, some great stories involving various cast and crew members, and what the film means to him all these years later. If you are going to watch one of the many special features on this release, make it this one.

Original Cut Commentary 2 The final track of the set features Asbestos Felt, Joel Wynkoop, and R.M. Hopes and is a decent listen. The participants do fall into the trap of describing what’s happening onscreen more than once, but they make up for that by telling some great stories and just having a good time. 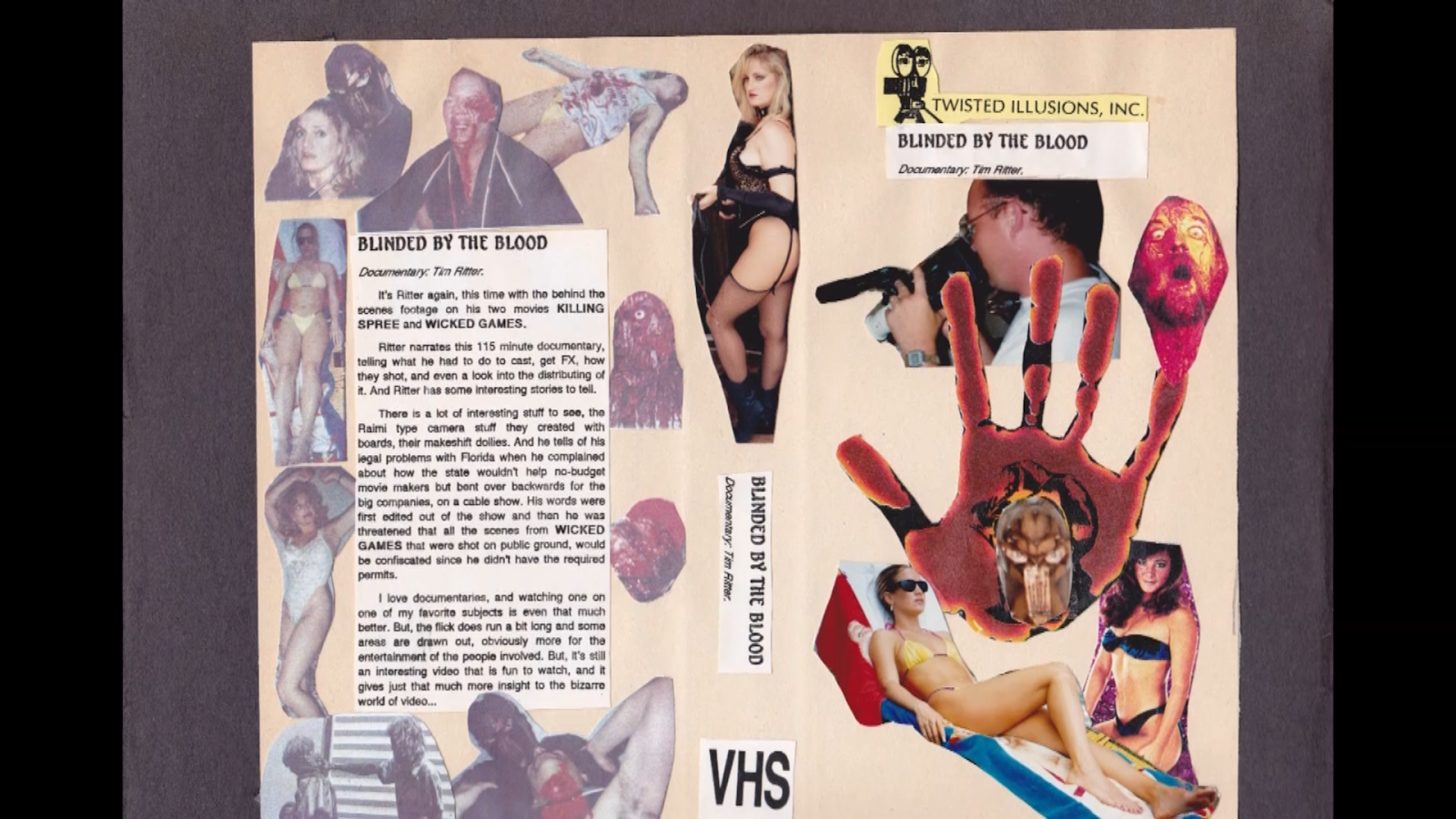 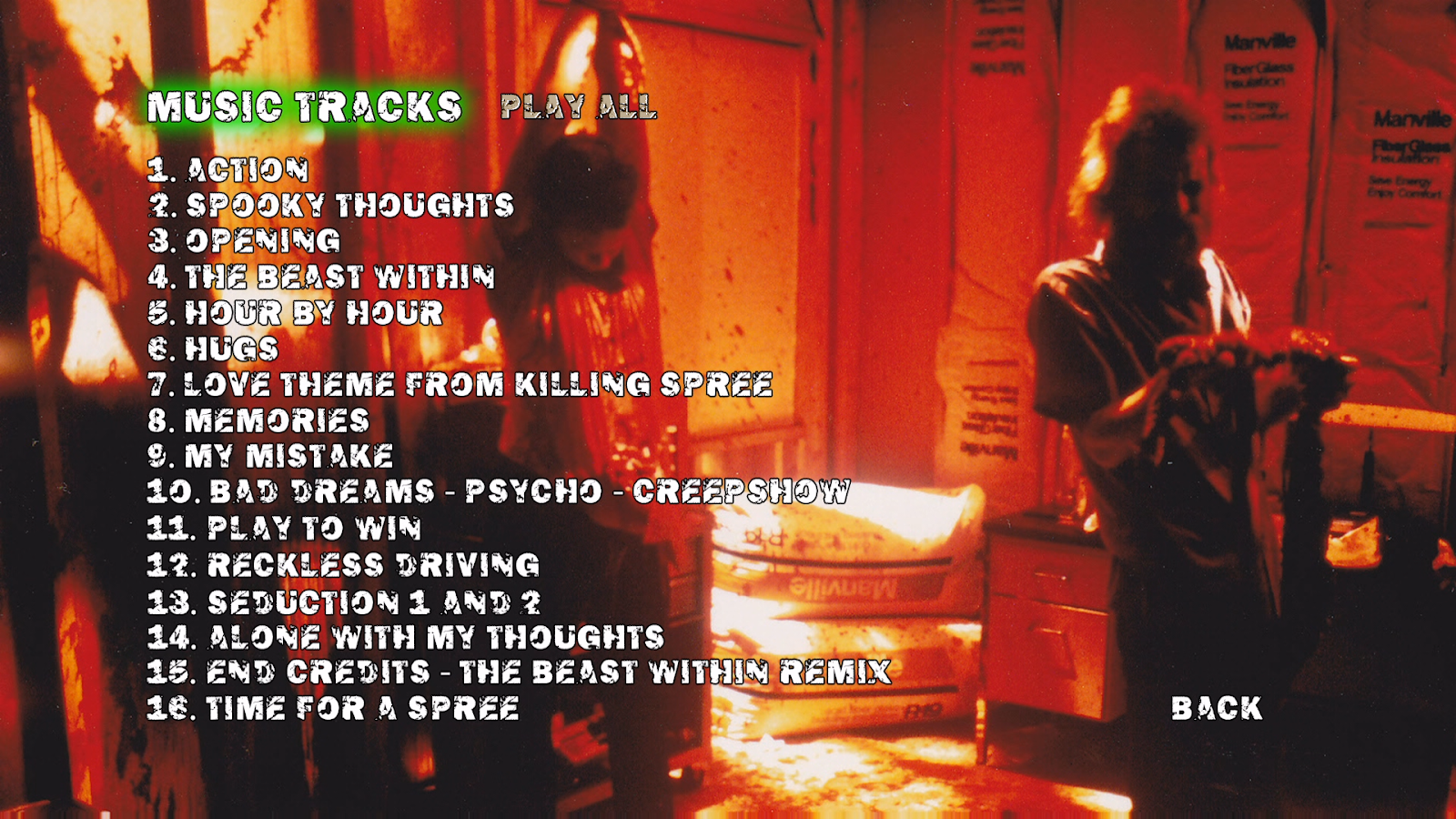 Music Tracks- Here we have basically the entire soundtrack. 16 tracks that include the film’s score and the songs heard in the film.


HG Lewis (43m 25s, SD, 1.33:1) This is video that was shot during a Fort Lauderdale talk radio show appearance from both Tim Ritter and Hershell Gordon Lewis. Ritter is there to promote a new VHS release of KILLING SPREE and Lewis is there because he appears to be on the show often. Ritter admits that Lewis is an influence on his work. Lewis counters by tearing KILLING SPREE apart. Lewis comes off as a complete asshole and I felt really bad for Ritter. You can see from his reaction that he is not having a good time listening to Lewis tear his film apart. It doesn’t help that the host seems to keep Lewis going. After the attack, the four men (there is another guy there, but I have no idea who he is) talk about their favorite directors and what horror films they love. 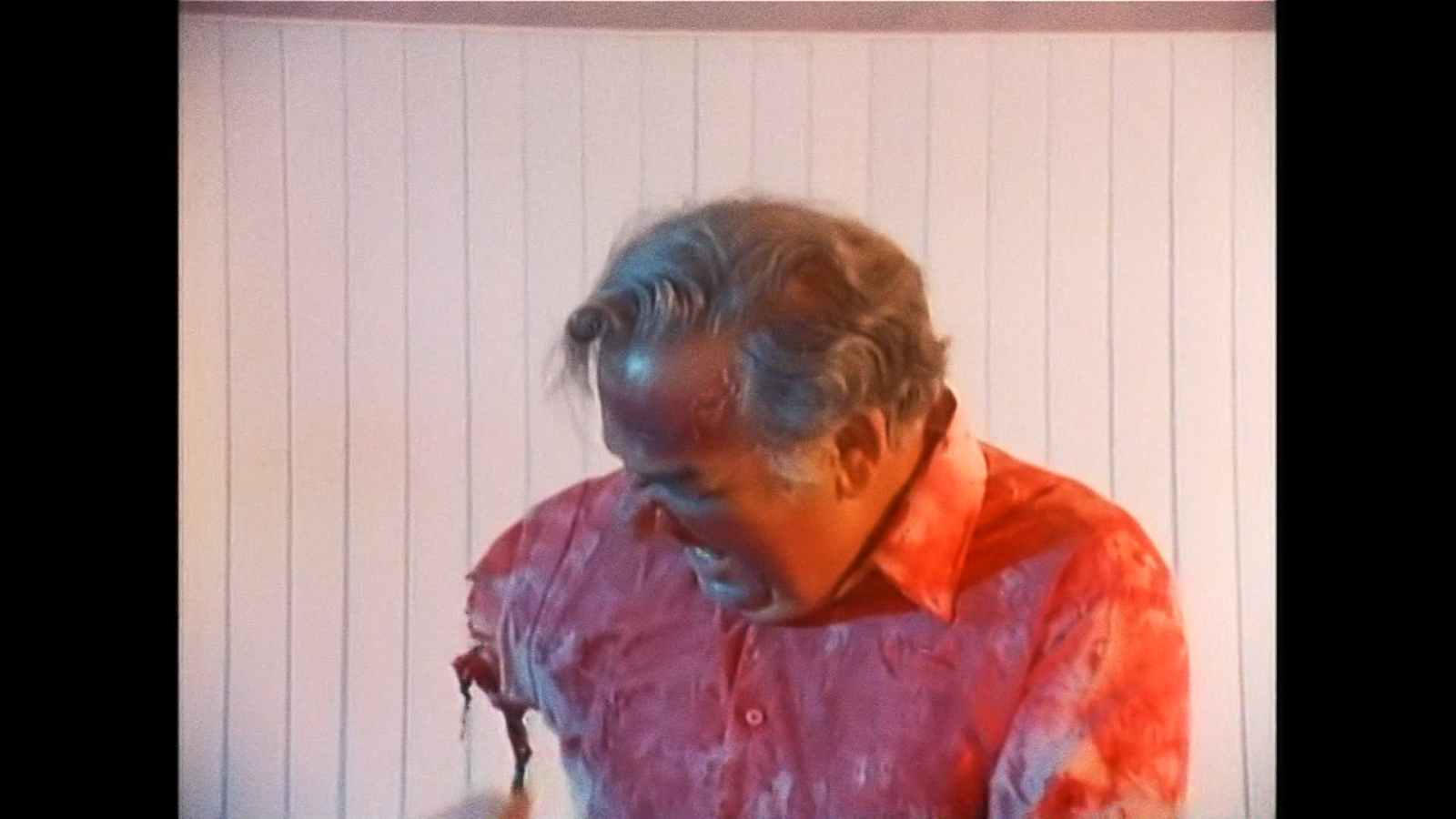 KILLING SPREE is the type of film that is going to cater to a select few, but I think that more people should sit down and watch a film like this. This is a film that tries it’s best to give you something different (for the time, at least) and does so with no reservations on whether you are going to like it or not. If you like the film, then you are going to like this blu-ray. The picture and sound may not be the best, but the special features are and really make this release something special.