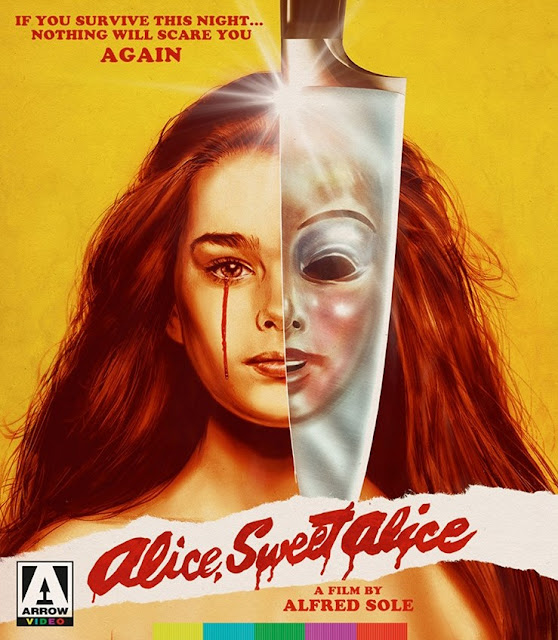 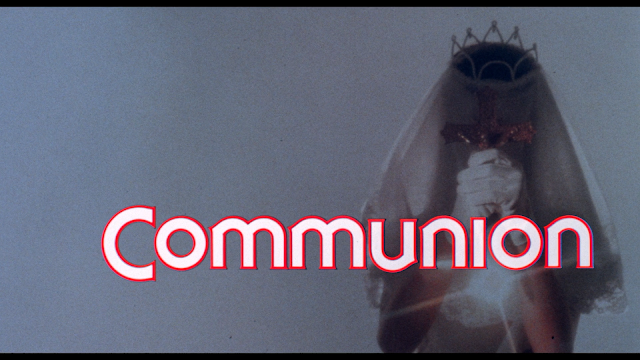 Alice Spages is a withdrawn 12 year old girl who lives with her mother, Catherine, and her younger sister, Karen. Karen gets most of the attention from her mother, and Alice is often left out of the spotlight. But when Karen is found brutally murdered in a church before her first holy communion, all suspicions are turned towards Alice. But is a twelve year old girl really capable of such savagery? As more people begin to die at the hands of a merciless killer, Alice's family and the police don't know what to believe.


Alice, Sweet Alice is the very definition of a cult classic. While the film did well at the box office ($12 million gross on a $350,000 budget), it isn’t a film that many people talk about, unless you are within the right group. It is also known as a “pro-slasher” as it doesn’t adhere to the slasher rules that had yet to be established. While the victims are killed slasher movie style, the film stays away from many of the cliches that would pop up two years later with Halloween.

The film is a slow burn, which is something that I normally am ok with, but here the characters are so unlikeable that we want the film to move faster just so it can be over with. After Brooke Shields is killed, the aunt of the two girls decides that she is going to move in with the family so she can be there for them. She doesn’t do it out of kindness, but out of shred thinking. She wants to be the center of attention even if the family doesn’t want her to be. The whole time she is on screen, we are wanting the killer to make quick work of her. When the killer does show up, the filmmakers want to torture us more by not only NOT killing her, but making her death one of the most annoying deaths I have ever seen. 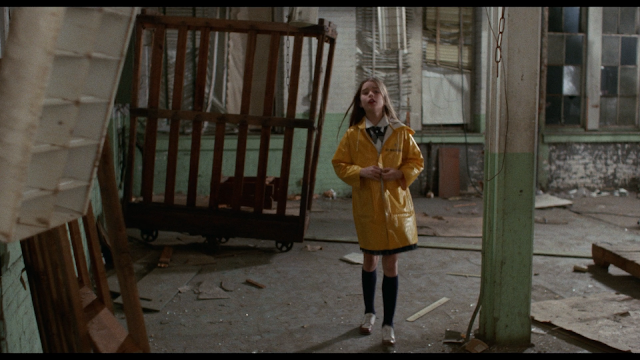 Alice is no sweetheart either, but I can kind of sympathize with her as she just lost her sister and is being accused of her murder. The girl just wants to be left alone. The problem here is that the actress playing Alice, Paula E. Sheppard, plays Alice as if she was always carrying around a chalkboard and any time she spoke, she would run her nails along the chalkboard at the same time. She spends a great deal of the film screaming her lines. Again, I can sympathize with Alice, but I wish she would turn down the intensity just a bit.

The film is not particularly gory, but it is fairly bloody. Every kill in the film is accompanied by some very paint like blood. I was actually surprised by this as I didn’t expect the film to have very much in the way of blood or gore. The kills and the whole film to a point reminded me of a giallo. The religious themes, the killer’s attire and killing methods, and the way the killers are shot reminded me of a giallo. This is one of the few things I can give the film credit for. Giallo’s were big at the time so the filmmakers probably wanted to make the film in that style. It gives the film a unique look and feel.

At the end of the day, Alice, Sweet Alice may be a fairly well-made film, but the acting brings the film down as the does the film’s slow pace. I am usually up for a slow burn film, but you have to have something outside of the killings to make me want to stay. The characters are so unlikeable that I could only think of two or three characters who were actually likable. I would only recommend the film to horror fans, but only to the diehard horror fans. Casual horror fans will find the film too boring. 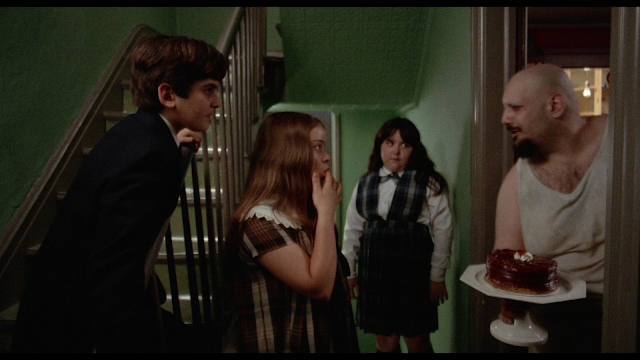 Featuring a brand new 2K scan of the original camera negative, and presented in the film’s original aspect ratio of 1.85:1, Alice, Sweet Alice looks great. The first thing of note is the film grain. There is a nice layer of it and this gives the picture a nice film-like feel to it. Colors are also very nice with the red of the blood and the yellow raincoat the killer wears being the boldest. Blacks are also nice and inky.

The DTS-HD Master Audio track does the job well. Dialogue is clean and the score, by Stephen Lawrence, comes through beautifully.

I was sent a check disc, so I can not review the packaging. I can tell you that it features a slipcover, reversible artwork, and a booklet with an essay on the film. 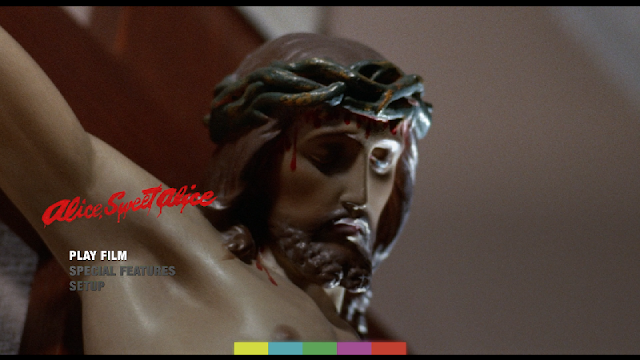 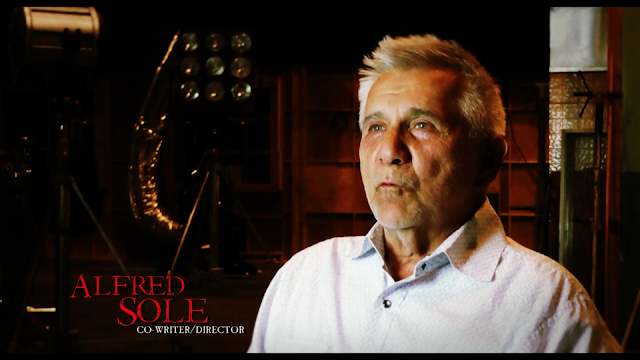 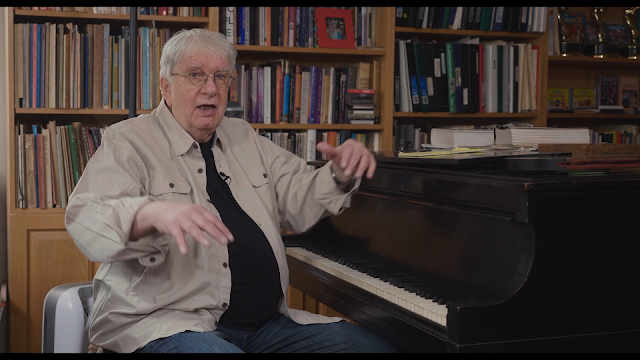 Alice On My Mind (14m 59s, HD) Interview with composer Stephen Lawerence. He plays portions of the score and then talks about how he came to these selections. 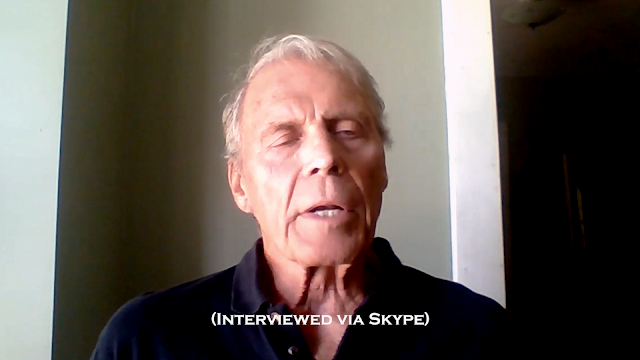 In the Name of the Father (16m 2s, HD) Interview with actor Niles McMaster. The interview is done over skype and sounds terrible. He talks about working on the stage before making his feature film debut with Alice, Sweet Alice. He has nothing but great things to say about the cast and crew and loved working on the film. He also talks about his role in Bloodsucking Freaks. 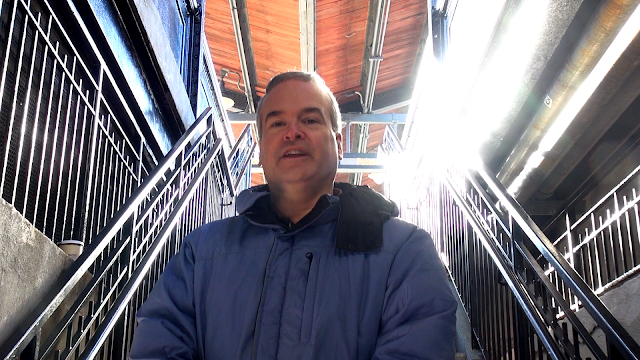 Lost Childhood: The Locations of Alice, Sweet Alice (16m 2s, HD) A tour of the original Alice, Sweet Alice shooting locations hosted by author Michael Gingold. Many of the locations have been demolished over the years, leaving either an empty space where a building once stood or another building having been built in its place. 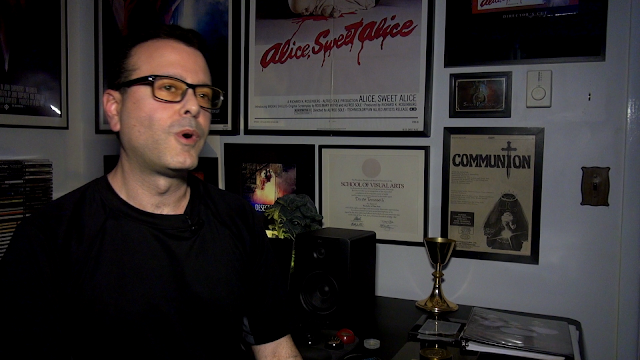 Sweet Memories: Dante Tomaselli on Alice, Sweet Alice (11m 18s, HD) Filmmaker Dante Tomaselli, cousin of Alice, Sweet Alice director Alfred Sole, discusses his long-standing connection to the film. Tomaselli talks about how he was a kid when the film was first released and because his family talked about the film all the time, the film grew in stature in his mind. He was not disappointed when was finally able to see the film. In fact, he has become kind of obsessed with the film. Not in a bad way, but in a creative way. He talks about his plans to remake the film and what he plans on bringing to this remake.

Deleted Scenes (2m 45s, HD) The following two short sequences, which were omitted from the final cut, were discovered when scanning the original camera negative. They are presented mute (no sound could be located) and within context of the sections of the film on which they were supposed to appear.

Original Trailer (1m 44s, HD) This is a weird trailer with the announcer saying things that don’t happen in the film.

Holy Terror (1h 47s, HD) Alice, Sweet Alice (originally released as Communion) was re-released in 1981 under the title “Holy Terror”. This version incorporates that alternate title card, along with some minor editing differences, and was conformed according to an archival tape sourced from Warner bearing the “Holy Terror” title. 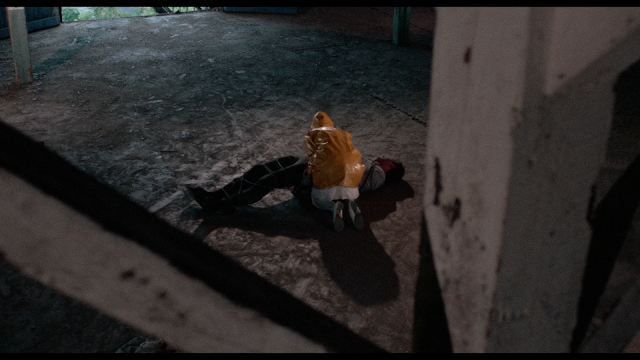 While Alice, Sweet Alice has some good things going for it, it gets bogged down with pacing and attention issues. The gore and some of the performances are nice, but the film is just too long for the story it wants to tell. The Arrow Video blu-ray, on the other hand, is fantastic. The picture and sound are just amazing and the features will give you everything you ever wanted to know about the film.

There are some real spoilers in these screenshots, so look at your own risk.