Larry Cohen's The Ambulance Gets Some Spiffy New Special Features

Scream Factory has sent over more information about their blu-ray release of Larry Cohen's The Ambulance.

Pray It Doesn't Come For You!


One minute Josh Baker (Eric Roberts, The Human Centipede III: Final Sequence, The Dark Knight) is meeting the woman of his dreams. The next, he's watching her whisked away by a mysterious ambulance that never arrives at the local hospital. Doubted by the police, Josh is forced to carry on a one-man crusade that leads to a discovery more frightening than his worst fears. This non-stop ride filled with action, suspense and heart-stopping thrills comes from cult filmmaker Larry Cohen (The Stuff, It's Alive, Q: The Winged Serpent) and features an all-star cast including James Earl Jones (the Star Wars films), Red Buttons (The Poseidon Adventure) and Stan Lee!


Special Features to be included are:


The Ambulance will hit shelves on March 13th. You can also order from Shout! Factory's website and get the blu-ray two weeks early.

Below is the blu-ray cover and the film's theatrical trailer. 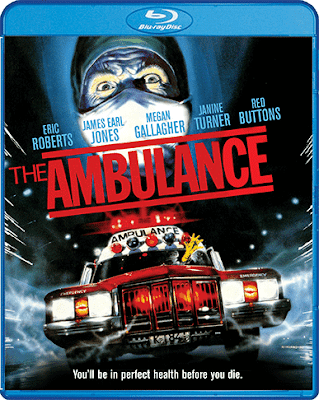